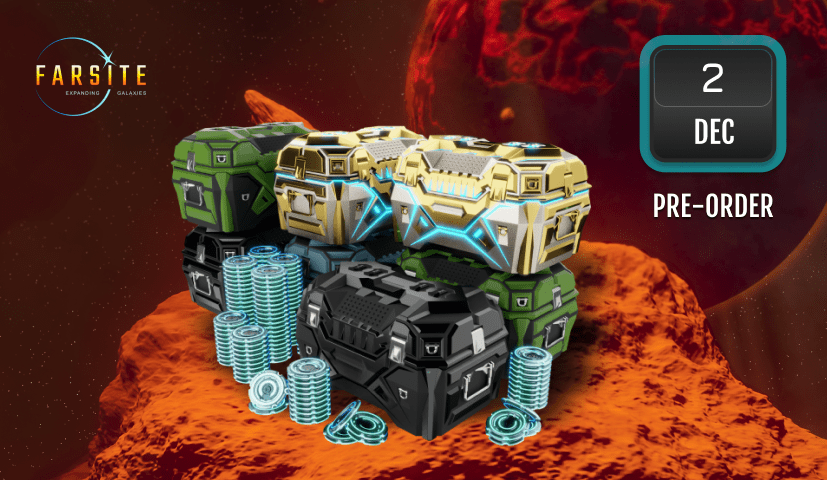 With early gameplay beginning on December 14th, this pre-order Crate Sale for Farsite is the last chance for players to equip themselves with items and credits for the Alpha. Four different levels of crates are available, with each increasing level packed with more guaranteed finds and increased odds for additional loot!

After recently opening Sector acquisition for their upcoming spaced based MMO RTS game, Farsite drops their final Pre-Alpha Crate Sale onto the players on December 2nd at 1pm UTC. Prices start at 0.05 ETH for the Ceres Crate and run as high as 1 ETH.

Each crate comes packed with goodies such as ship hulls, components, credits and modules. The more expensive crates contain blueprints, while the top of line option, the Sacura Club Crate, has a chance of holding a super-rare module, the Sacura Key! Only 20 Sacura keys will ever exist! Ships fitted with a Sacura Key gain access to the exclusive Sacura Club station as well as special perks and bonuses.

And while players will want ships to play the game, the other items in the crates should not be overlooked. Blueprints especially, are quite valuable. Crates will be the only way (aside from secondary markets) that players can acquire Original Blueprints.

In addition, each crate from the second level (Deimos Crate) on up has a chance of finding a unique or exclusive Sacura ship.

Pre-Alpha gameplay starts on December 14th. Plays can expect to test fly their ships, dock at stations, explore other stars, and visit their planets. Most importantly though, Pre-Alpha marks the point where players begin mining and gathering resources from their Sectors.

If you don’t already own a sector, there are still some available on various planets, though most are quite expensive. For those with less deep wallets, the opportunity to acquire Sectors on new planets arrives on December 9th. Keep an eye on the Farsite Twitter and Discord.

Farsite is a blockchain-powered MMO game with elements of real-time strategy. The game’s economy uses aspects of decentralized finance on the Ethereum 2.0 blockchain. Players can take on all kinds of roles to be part of a bigger intergalactic economy. Every item in the game is made by players, using resources that have also been acquired by players.

Players could be a hauler, a complete contracts by moving goods between space stations. They could also be a miner, gathering resources, or a manufacturer who creates tools and items. The universe of Farsite also offers space for governance over stars, mercenaries, pirates, politicians and of course traders.

To produce something, you’d need a blueprint, components, a base on a planet and Credits to pay for services. The blueprints you can buy, borrow, or find, while components are made from resources found on planets. All items in the game are owned by players. Establish a base on a Planet in a hunt for rare materials to craft powerful Ships and Modules, trade on the open market, fight for loot and honor to govern the entire Constellation!

Farsite also boasts Credit-backed NFTs, or cNFTs as they call them. Every Ship and Module is a cNFT. These are in-game NFTs which can be burned to receive Credits. This feature guarantees that every cNFT will always have a minimum value, based on the number of credits it’s backed with.