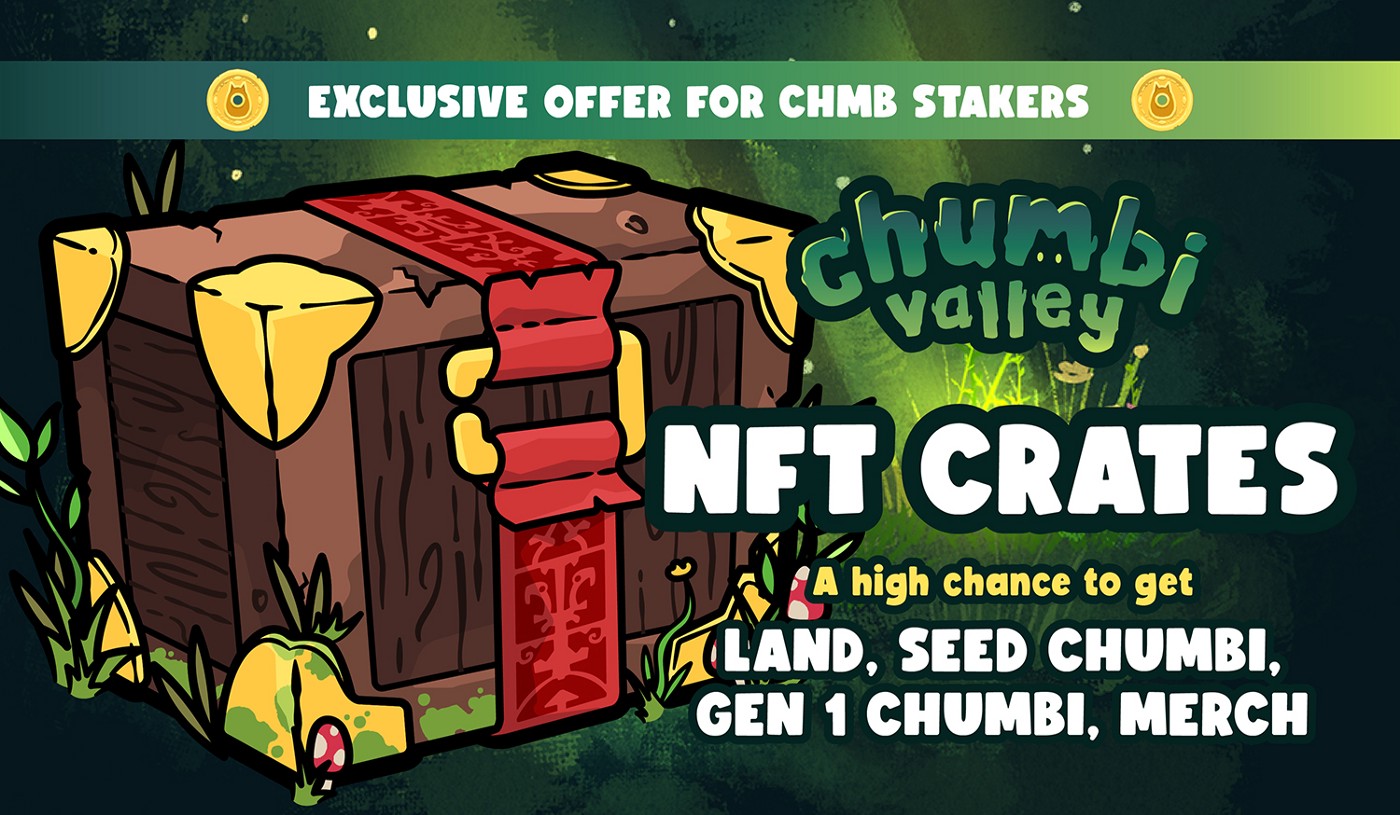 Chumbi Valley continues to reward their early adopters. They’ve already announced a series of airdrops for holders of Seed Chumbis. Now, they are offering an opportunity to purchase an exclusive Staker’s NFT Chest to everyone who staked 1000 or more CHMB tokens on their site before April 14th.

CHMB stakers began locking up up their tokens for the three month staking period back in January. And now, that staking period is coming to a close. As a special reward, Chumbi Valley is giving everyone who staked at least 1000 CHMB tokens during this period, a chance to purchase a special crate. The staking rate for CHMB tokens (over 100% APR) was already a nice reward in of itself. But exclusive, never to minted again items? That’s a whole different level of reward. If Chumbi Valley becomes a successful game, these early, special NFT rewards could end up being quite valuable!

The Chumbi Valley Staker’s Crate sale starts on April 14th, 7:30pm GMT and runs for four days only. Crates cost 40,000 CHMB tokens, all of which will be burned. There is no limit on how many each wallet can buy. Unfortunately, this opens the door for mega-whales to swoop in and buy a significant portion of the crates. Hopefully that won’t be an issue here.

There will be only 3,000 crates available. If they don’t sell out, Chumbi Valley will hold a community poll to decide what to do with the remaining crates. The team initially said that anyone staking over 1000 tokens before April 14th would be eligible for the sale. But, after some community feedback, it looks like they may require that the tokens were staked at least a month ago. No official word on this requirement yet, but personally, I hope they do add it. This keeps speculators from jumping in at the last minute to take advantage of the sale.

Though still way below the all time high, the price of CHMB tokens spiked about 10% on this announcement. CHMB tokens currently run at about 0.007 cents each, making the cost of each crate about $300. CHMB token, staking, and crate purchases are all on the Binance Chain.

Crates will be minted after the sale. They will be sent to the Polygon version of the address that made the purchases. Crate opening date happens sometime after that.

What’s ahead for Chumbi Valley?

NFT sales and breeding events are great, but what about the game?! Well the good news is that we should see the first beta versions arrive sometime soon. We are officially into stage 3 of the Chumbi Valley team’s roadmap which includes beta for Seed Chumbi holders in mid 2022. We should also see an official marketplace open up on the Chumbi Valley website and a land sale soon!

The team plans to build a full ecosystem with crop growing, breeding, Chumbi leveling, spells, home decor, and much more! Check out the Chumbi Valley litepaper for more information.