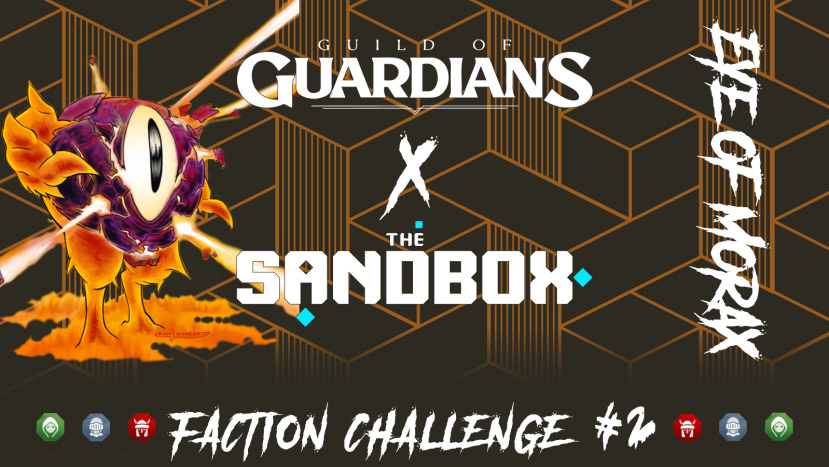 The second stage challenge for the special, Guild of Guardians adventure in The Sandbox, closes soon. Known as the Eye of Morax, players who complete the game on medium difficulty and submit their results, have a chance to win Guild of Guardians tokens (GOG)! No ownership of Guild of Guardians or Sandbox NFTs required. Though you do need to join the GOG Discord and pick a faction to support.

The Guild of Guardians adventure in the Sandbox, called the Eye of Morax, features an ongoing, play and earn challenge through the summer. We are currently in stage 2, or medium difficulty. Players complete the challenge for a chance to share in two prize pools totaling 6000 GOG tokens.

The challenge, found within the Sandbox GameMaker Gallery, is titled “GOG HQ”. Unfortuately, Sandbox Maker has still not implemented a search feature, making their project list nearly useless. In order to figure out where to find the experience, you need to use this third party search tool.

The Eye or Morax

In the Eye of Morax quest, players are tasked with knocking balls into lava while avoiding being killed by a number of aggressive skeletons. The Eye of Morax challenge runs in three stages, each one more difficult than the last. The first stage, easy mode, has already completed. But there is still time to take a shot at the medium difficulty challenge. And entries for the hard challenge don’t open until August.

To receive rewards, players must have their wallets linked to IMX for token distribution. They must also join a faction on the Guild of Guardians Discord. This is because the prizes are divided into pools and awarded to the factions with the highest participation score. The first prize pool consists of 5000 GOG tokens. The faction with the best participation score receives 45% of the pool, with 100 GOG tokens distributed to each of 23 random winners from that faction. The second place faction sees 15 players awarded, while 12 players from the 3rd place faction receive 100 tokens as well. So, no matter which faction you choose, there is still a chance for a nice token reward!

In order to participate, players must complete the Eye of Morax on medium difficulty, take a screenshot of their victory screen, and submit their information in this form.

The second prize pool holds 1000 GOG tokens. This contest is for individual performance. The top 10 players able to complete the quest on medium difficulty in the quickest times possible, share the prize pool. Players must record their entire challenge run, then make a tweet with a link to the recording, a screenshot of the victory screen, with the hashtag #GOGxSANDBOX, AND tag @TheSandboxGame & @GuildofGuardian.

Players have until August 1st to submit their entries for these two challenges. Both prize pools refill for the third round of the challenge, coming in August. You can read the official announcement here.

It has been great to see The Sandbox host play and earn events with Alpha Season One and Alpha Season Two. But, it’s even better to see third parties develop and publish their Sandbox experiences! After all, that’s what The Sandbox is supposed to be all about!

Just recently we had a Snoop Dogg play event, and now, Guild of Guardians joins in the fun! In addition, there have been a number of smaller contests from various developers. I just found one recently on the official contest page from MOCA, the Museum of Crypto Art. Not only was it an easy chance to win some free mSAND tokens, but I also got look at a lot of cool art while I was there!

However, the Sandbox Game Maker interface leaves a lot to be desired in regards to finding an experience to play. Most importantly, the missing search feature I mentioned earlier. This is such a simple thing to add and would make finding specific experiences an infinitely smoother process. So, Sandbox, please add a search feature. I bet that a lot of experiences would receive a lot more visits!