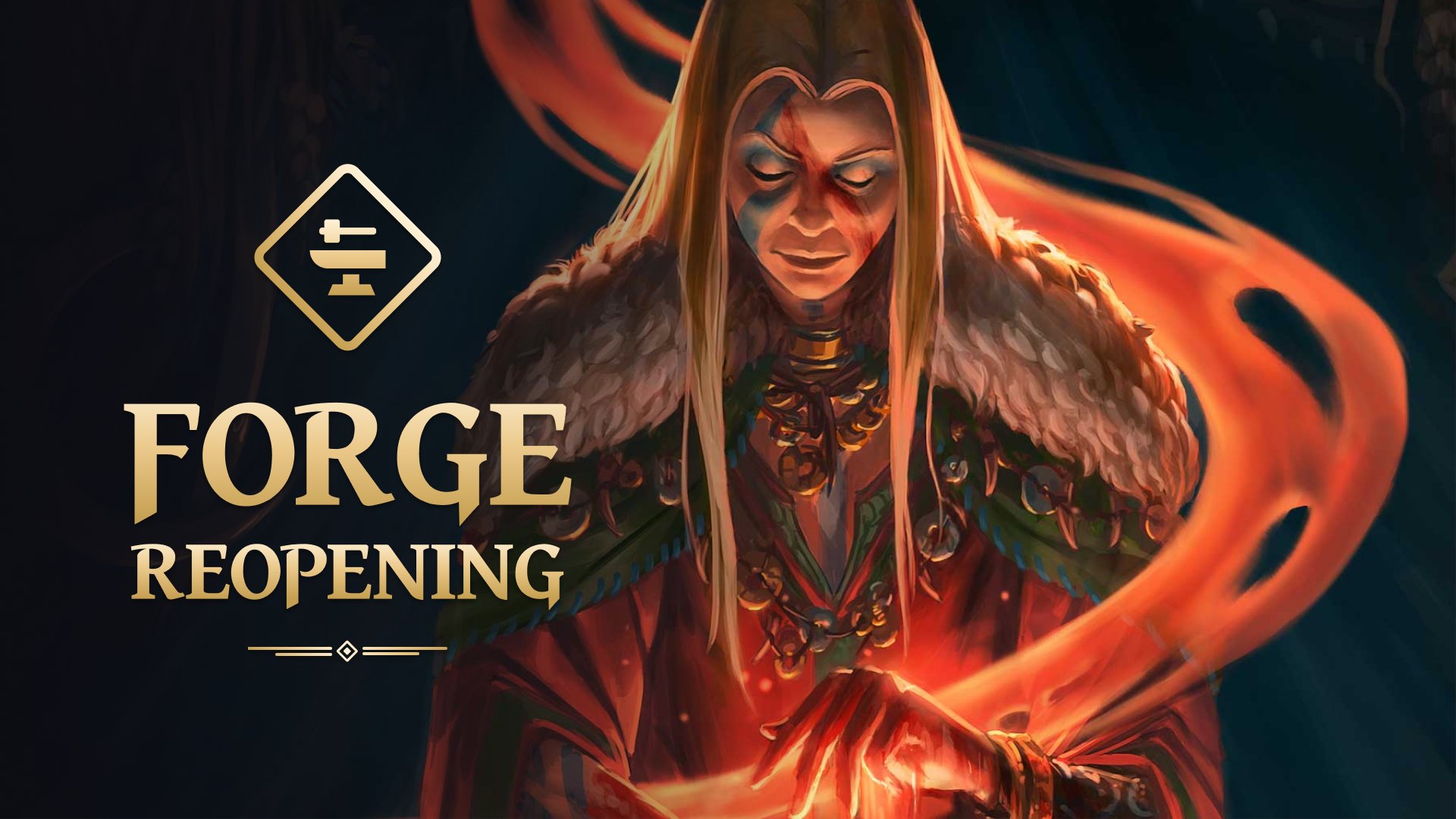 In an announcement this week, the Gods Unchained team surprised their player base by re-opening the Forge! The Forge allows players to merge two duplicate Core cards into one that can be sold on Immutable X or other external markets. Coupled with a new balance patch, this week has brought much excitement to the Gods Unchained community.

Some old timers who played Gods Unchained back in the ‘ole days may remember when players could take two Core cards of basic rarity, and fuse them together to make one of Meteorite rarity. While getting a new border color was nice, the main draw in fusing is that you could sell the card. This is the only way Core cards ever get to the market.

But alas, rising gas prices brought the Forge to a close a long time ago, with promises of a re-opening when gas fees on the Ethereum network became more reasonable. Unfortunately, that day of reasonable gas fees still has not arrived. But with the rise of Immutable X, the days of Forging are upon us again! With it’s gas-free transactions, Immutable X allows Gods Unchained to mint the forged cards directly onto the network.

The forging process is pretty simple. Open up the Forge page in the Gods Unchained client, select the cards to forge together, and then press a few confirmation buttons. The forging process does require a visit to the Immutable X site via web browser. So there are a number of clicks involved, including signatures in your Metamask wallet. But, even with those, the user pays no ETH gas fees!

Forging a card is not completely free. Users must still pay a fee in Flux and $GODS token. Flux is an in-game commodity only, earned by playing matches. $GODS on the other hand, is an ERC-20 token. Players earn $GODS by participating in the weekly Blessings of the Gods event. The token is also available on various decentralized exchanges such as Uniswap and Sushiswap.

The current forging costs are as follows:

The value for $GODS tokens currently runs at a little over $6 each, so it’s important to check the latest card prices before Forging.

The re-opening of the Forge is a huge event for Gods Unchained! Selling cards earned through playing the game has long been one of the planned play to earn avenues. But without the ability to put Core cards on the market, that potential income stream has been closed. In addition to allowing players to make money, bringing more Core cards to market also opens up additional deck possibilities for new players. Instead of having to grind through games and hope that you receive the cards you need for your awesome deck idea, now those cards can be picked up from the markets at reasonable prices.

Though not as exciting as the Forge, Gods Unchained players also received a new balance patch this week. This balance patch mainly focused on cards from the new Divine Order set, but it also includes a very interesting update to an often used Core card — the Shieldbearer. Long a staple include in many decks, particularly aggro, the Shieldbearer receives a slight nerf, reducing it’s strength from 1 to 0.

Three changes to Gods Powers. Flourish now heals instead of buffing. Selena’s Mark deals damage and heals your God instead of adding a weak Amazon to your hand. And Soulburn returns as a 1 mana power that deals 1 damage to each God, replacing Undying Wish! Good stuff overall. I’ve always been partial to Death decks, so I will definitely be trying out a Frenzy/Soulburn deck soon!

Overall, a couple of dozen cards are changed. Einar, the Frozen King and Takhat, the Forgotten both received nice buffs. You can read a full list of changes on the official patch notes.

After years of excruciatingly slow balance updates, the Gods Unchained balance team have settled into a much more active cadence. Balance patches appear about once a month and generally contain changes to numerous cards. This is a great change for the game and I hope this same level of engagement continues into the future.

Gods Unchained is a collectible card game built on the Ethereum blockchain, that uses the Immutable X layer-2 solution. The blockchain stores all ownership of the cards, giving players full ownership over their own set of cards. Players earn digital cards by playing the game. When they have two identical cards they can mint these into one blockchain-based card. We call these cards non-fungible tokens, and the owners can trade, sell, or use them in the game itself.

Gods Unchained Divine Order is the second expansion of the trading card game, and the first expansion launching on Immutable X. Divine Order launched with 190 new cards. The trading card game’s expansion will introduce a mechanic called Order, making cards passive. These cards can’t attack, or take damage. However, they can buff up. Therefore players can user Order to stop an enemy attack, or protect their own cards.