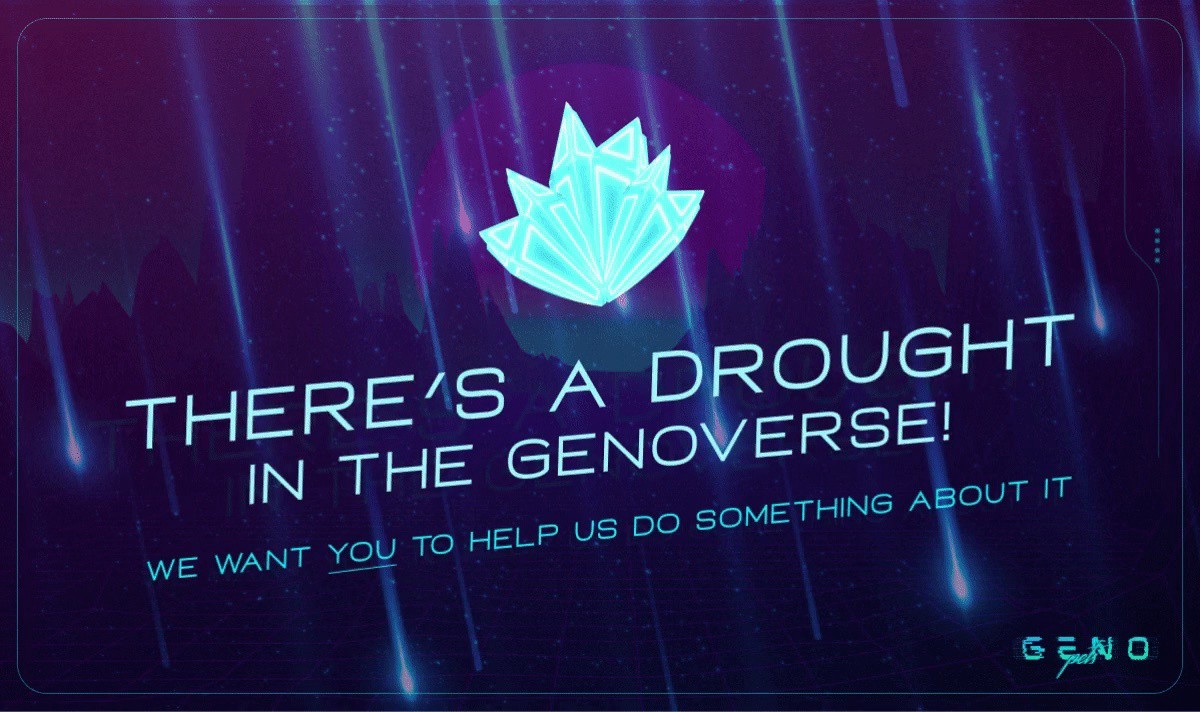 Step right up and get your Water Crystals here! Limited time! Only 100 for sale! You set the price! Or something close to that anyway. Genopets, a move-to-earn game in development on the Solana blockchain, is putting up 100 Water Crystals for sale on June 3rd. These Crystals are one of five types needed to create a Genopets Genesis Habitat, an important part of their game. Why just the Water Crystal? Well now, that’s a question with an interesting answer!

Genopets is a move-to-earn game where players own a Genopet that levels up as it’s used. As part of the game, Genopets live in specialized habitats. Here they can regain energy, manufacture special resources, and generate tokens. Genesis Habitats have special bonuses and abilities that regular habitats do not.

As part of the lead-in to the Habitat minting, Genopets held a series of puzzle contests over several weeks back in February. At each stage, players who solved the puzzle were gifted one of the five Refined Crystals — Water, Earth, Metal, Wood, and Fire. Players with all five crystals and a Terraform Seed can merge these together to create their very own, unique Genesis Habitat. And while many Genesis Habitats have been minted, their creation has become blocked by the lack of Water Crystals available on the markets. Where the other four Crystals have prices of 7-10 SOL, picking up a Refined Water Crystal will cost you 5x as much! Almost as much as just purchasing a completed Habitat!

So What’s the Deal with Water Crystals?

Somewhere along the way, the Crystal availability slipped out of balance. From the moment that Crystal trading opened, Water Crystals were valued significantly higher than the others. Why was this? The same number of Crystals were distributed for each contest. How did Water end up being so much more valuable? It was the prize for finishing the first contest, which, IMO, was easier than the following ones. So perhaps a number were picked up by casual passers-by who haven’t kept up with Genopets? Or maybe someone is sitting on a hoard of Water Crystals? Or maybe those with the Crystals had the same difficulty getting any of the Solana NFT markets to recognize it in their wallet as I did?

Whatever the reason, Water Crystals reached a floor price of 50 SOL (note: floor prices dropped slightly since the announcement), which is as much as the other four Crystals combined, and a pretty hefty investment for anyone interested in minting a Habitat! So, to alleviate this bottleneck, the Genopets team announced a special sale of 100 Water Crystals, starting on June 3rd, 2022, 15:00 UTC. The sale runs until 3:00 UTC on June 4th, or whenever the Crystals sell out.

Genopets is partnering with a project called Strata for the sale, which will function in a Dutch-auction style. Starting price at 50 SOL, and gradually dropping over the next 12 hours. However, the price drop isn’t steady. As people purchase Crystals, the price will start to rise — until sales stop, at which point it begins to fall again. The idea here is for the community to set the price and value of these Crystals during the sale.

We don’t have a sale link yet, so join their Discord and follow on Twitter for the latest announcements.

Genopets is a free-to-play, “move to earn” game built on the Solana blockchain. Genopets uses data tracked by a smartphone or fitness wearable to level up a Genopet NFT in the game. Players summon their pet and quest in the Genoverse exploring hidden lands, finding loot, crafting items, and battling with other players.

The play-to-earn economy of Genopets consists of four elements:

Players can generate income from leveling up Genopets and selling them. Or they can build a habitat and sell the Crystals and KI tokens produced. The GENE token exists on both Solana and Binance blockchains. Genopets is currently in private beta and adding new players on a regular basis. They also recently opened up a staking program for their GENE token.