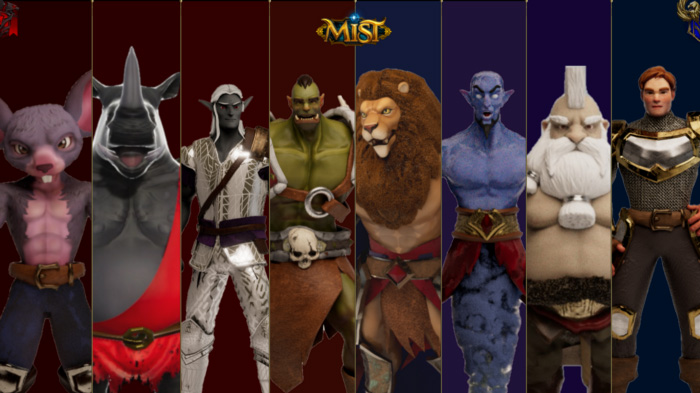 Mist declared the month of April as their own, vowing to release daily info about their upcoming MMORPG. And so far, they have delivered! In this article, we’ll take a look at some of the new info about the eight races of Mist, in particular, the recent reveal of their special abilities.

Even before April started, the team had already begun releasing screenshots and information about the models and designs for the races. Now we have an info dump on their special abilities. So let’s review and see what we have learned so far about the races of Mist — Humans, Leonin, The Fallen, Dwarves, Rhinokin, Mousekin, Elves, and Orcs!

Note: this list may be changed as development proceeds.

Humans, ever stalwart selections in MMOs. Originally from the south of Darnia, Humans can be found almost everywhere. Their abilities are:

Leonin, lion people who live in Prides and view hunting as an integral part of their culture. And looking at their abilities, it seems that you really don’t want to try and run away from a Leonin!

Ethereal beings, able to cross the planes, The Fallen seek truth and knowledge, at any cost. Their abilities consist of:

Tough as nails and quick to grab a pint, the Dwarves of Mist are good-hearted, but woe to those who anger them! The Dwarven abilities include:

A long-lived, nature loving people, Elves prefer diplomacy, but also understand the need for vengeance when wronged. Master of magic and the martial arts, Elves have many ways to hurt and confound their opponents.

A warrior culture focused on the concepts of honor and bravery, Orcs seek out their foes in battle. And their abilities reflect this focus on the fight.

Mist is a fantasy, MMORPG game currently in development on the Binance Chain. Built on Unity, Mist features an open world with eight races, five character classes, and an action oriented combat style.

The game has its own token, MIST. This is the main currency for the game. MIST exists on the Binance chain and will be used for all in-game transactions. In-game equipment will be minted as NFTs, and as such can be freely bought, sold, and traded by the players. NFTs can also be upgraded using multiple copies (which are burned) and MIST tokens. The player receives a new, upgraded NFT.

Players will have opportunities to invest into local businesses in-game, earning income as those businesses make sales.

They have already sold their initial batch of NFTs for classes and items, dubbing these the 1st Edition. These are only available for purchase from other players now, and will offer some sort of ongoing bonuses for the players. Players who don’t own any Mist NFTs can still play using a default class called the Adventurer.

Look for more info about Mist throughout the month of April!