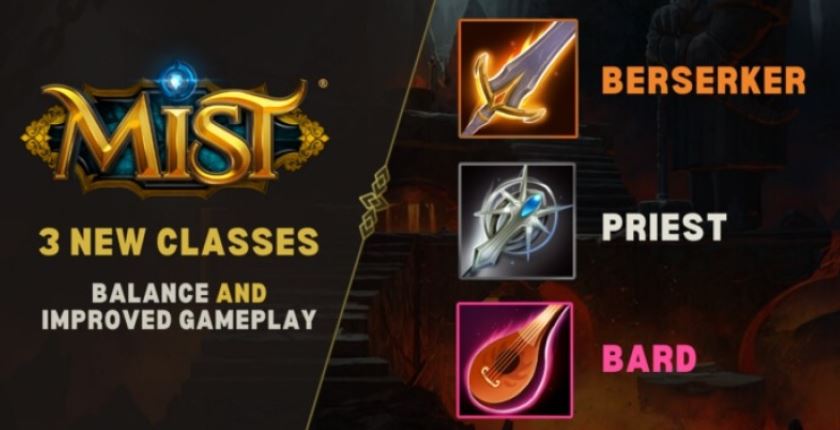 The month of Mist continues onward! After revealing details about all of the Races of Mist over the first week, Mist followed that up with information about the five eight Classes in the game. Though only five Classes were originally planned, the team decided that the game needed more options.And so, we have three new classes, the Berserker, the Priest, and the Bard.

As game development progressed on Mist, the dev team for this upcoming NFT-based MMO realized that they needed more class diversity. Mainly in the form of support and dedicated tank classes. And so the number of Class options in Mist rises from five to eight — adding Berserkers, Priests and Bards.

Along with this also comes the first class limitations for factions. The new Berserker class can only be played by members of the Clan faction, while the Crusader is only available to the side of Order. And like the existing classes, the three new classes will also exist as NFTs. However, they won’t be considered 1st Edition.

So let’s take a quick look at all eight classes and summarize what we know so far.

Heavily armored warriors meant to fill the tank role. In the lore, Crusaders strive for virtue and assist those in need. For offense, the Crusader wields two holy damage attacks, Holy Strike and Judgement. They also have an area attack called Holy Ground that does physical damage. As for tanking skills, the first is Divine Protection, offering reduced physical damage for a short time. The second, Sacrifice, which causes the Crusader to switch spots with a nearby ally, potentially pulling them from a dangerous situation.

The hunters of Mist, Rangers prefer dealing damage from afar, pinning their enemies down and launching barrages of attacks. Rangers are also friend to the animals, and can even tame some and turn them into pets. But they’re mostly known for their damage dealing abilities. Aimed Shot and Rapid Fire increase damage and attack speed, respectively. Spread Shots sends out a wave of projectiles in a cone shaped attack. And for control, Rangers can place Bear Traps to stun and damage their enemies, or launch a Heavy Artillery attack which causes a stun and pushback effect.

Devotees of magic, Enchanters study any and all spells that they can. Their abilities often have multiple effects, such as the Icebolt, which damages and slows the target. Or Tornado, a channeled spell which pulls enemies close and damages them in the process. They also have Thunderstorm, damaging and stunning nearby enemies, Firebolt, which causes initial damage and extra damage over time (it burns, it burns!), and Energy Transfer, which damages the target and heals the caster!

Hunters of monsters and other unwanted creatures of the night, the Witch Hunters have a variety of tricks to confuse and harass their foes. Though familiar with many dark arts, the Witch Hunters are avowed protectors of the people. With a Potion of Silence and Blinding Dust the Witch Hunters incapacitate their opponents, before hiding with their Cloak ability. Then striking from the shadows for extra damage, they hand out the pain with Diseased Daggers and Cluster Bombs! Valued for their crowd control abilities, Witch Hunters should have little trouble finding a group to adventure with.

A vital part of the holy triumvirate in MMOs is the healer. And as a primary support class, the Priest is ready to do just that. With two healing spells, a target heal in Holy Light and an area ally heal in Divine Pulse, the Priest sets the stage by keeping their party’s health bars full. They can follow that up with Bubble of Light, which protects the target from spell damage. But healing isn’t all that Priests can do. They can also Curse an enemy, causing damage to them over time, and blind their foes with an ability called Not Worthy.

Shape Shifters are the druid types in Mist. Communing with nature and calling upon animal spirits to aid them, Shape Shifters function as damage dealers, while also controlling the fight with immobilization attacks. Their two immobilizing attacks are Wolf Fangs and Nature’s Hold. They also have an frontal area attack with Bear Claw, and two movement abilities, Frog Leap and Gazelle’s Gait. Gazelle’s Gait gives Shape Shifters a temporary movement bonus, while Frog Leap jumps them forward, perhaps to move quickly into combat or put some extra distance between them and a pursuer.

Unlike the Crusader, the Berserker favors charging into combat and laying into their foes at close range. Not afraid to take damage or dish it out, the Berserker often begins a fight with their Charge ability, causing them to swiftly run at a nearby enemy. Then they can follow that with To the Death, an area of effect taunt, and Raging Voice, a fearful shout which stuns an enemy. Then, once the foe is distracted and in-range, the Berserker unleashes their fury with Spinning Blades and Mortal Strike, two heavy damage abilities.

Singers of songs, charmer, and an important support Class, the Bard brings a selection of unique abilities to the table. The first, Melody of Madness, is that annoying tune that you just cannot get out of your head. Anyone effected by this takes spell damage over time. They also boast two abilities that function as both buffs and debuffs. Heroic Song will increase a teammate’s damage abilities, or, if cast on an enemy, reduce their damage output. Similarly, Frequency Shift boosts an ally’s movement or slows that of an foe. Soothing Voice can heal a damaged target, and even bring the dead back to life! And finally, Irresistible Dance, which is probably my favorite. Enemies effected by the Dance can do nothing but dance until the spell is interrupted or they are damaged! This could lead to some very hilarious moments!

Mist is a fantasy, MMORPG game currently in development on the Binance Chain. Built on Unity, Mist features an open world with eight races, five character classes, and an action oriented combat style.

The game has its own token, MIST. This is the main currency for the game. MIST exists on the Binance chain and will be used for all in-game transactions. In-game equipment will be minted as NFTs, and as such can be freely bought, sold, and traded by the players. NFTs can also be upgraded using multiple copies (which are burned) and MIST tokens. The player receives a new, upgraded NFT.

Players will have opportunities to invest into local businesses in-game, earning income as those businesses make sales.

They have already sold their initial batch of NFTs for classes and items, dubbing these the 1st Edition. These are only available for purchase from other players now, and will offer some sort of ongoing bonuses for the players. Players who don’t own any Mist NFTs can still play using a default class called the Adventurer.

Look for more info about Mist throughout the month of April!