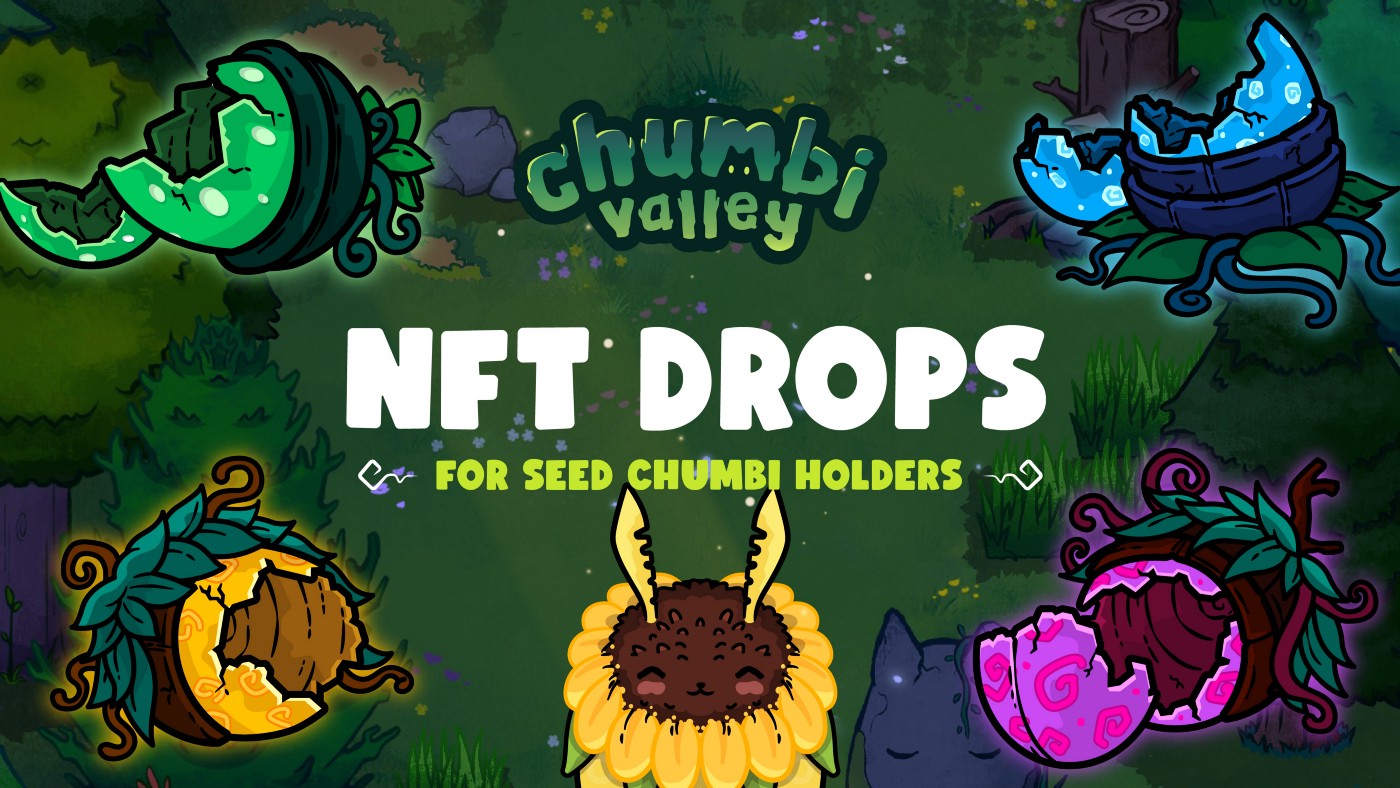 The Chumbi eggs have hatched and the Seed Chumbi revealed. These Generation 0 Chumbis are limited and already in high demand for their potential breeding ability. The latest announcement from Chumbi Valley, special NFT airdrops for Seed Chumbi holders, will likely push demand even higher!

Owning a Seed Chumbi just became a bit more rewarding as Chumbi Valley reveals four upcoming NFT airdrops for Seed Chumbi holders! These airdrops begin on the 22nd of February and continue until the end of April, staggered at three week intervals. All drop/snapshot times are 8pm GMT +8. One NFT per Seed Chumbi. So if you own 10 Seed Chumbi, you’ll receive 10 NFTs from each airdrop.

The first airdrop is an NFT called Pod Remnants. This is a decorative collector’s item that can be placed in your home area. It is known to attract butterflies to the area. This NFT comes in four varieties, Rare, Epic, Legendary, and Mythic. Pod Remnant rarities are distributed based on the Chumbi’s rarity.

The other airdrops (in order), are Name Tag, Chumbi Trail, and Nimble Boots. Name Tags let owners name their Chumbis and change the metadata. The Chumbi Trail is another cosmetic, though this one is for the Chumbis. Attach the Trail to a Chumbi and it will sport a fancy, glowing trail behind it as it walks. The Chumbi Trail also comes in four rarities. The final airdrop, Nimble Boots, provide in-game utility. Equip these boots with your character to double your walking speed!

As Seed Chumbis are limited to 4096, so are these NFTs limited. For the items with different levels of rarity, that works out to a total of 1696 Rare, 1200 Epic, 800 Legendary, and 400 Mythic. Unfortunately, the team has not yet revealed any screenshots of what the decorative items will look like.

It’s too late to birth your own Seed Chumbi, though there are plenty for purchase on Open Sea. Chumbi breeding is currently in development. We should receive more details and a release date for that feature soon.

What is Chumbi Valley?

Chumbi Valley is a tamer, battler game, much like Pokemon, built on the Polygon blockchain. Players breed and raise creatures called Chumbi. Players and their Chumbi explore, farm, breed, craft, and battle. The game is free to start. Each new player will be paired with an Ancestor Chumbi that can help you get started but which cannot be sold or traded. Pretty much everything else will be an NFT, allowing players to buy, sell, trade, and play to earn!

Much like Axie, Chumbi have various body parts, six in total — coat, ears, horns, eyes, mouth, and pattern. When born, each Chumbi has two attacks, 2 effects, and an ability. A Chumbi’s main type and its coat type determine it’s attacks, while, ear and mouth define it’s effects and the pattern it’s ability. And where would we be without breeding?! Of course players can pay some fees to create new Chumbi from two parents. Nearly everyone will be unique and some breeding attempts may create a very rare mini-Chumbi!

Chumbi level up as you use them. They learn spells, explore, find items and fight wild Chumbi. Feeding them makes them happier, and they must eat a special candied apple every five levels to continue progressing. Each player has a Forest Home area which they can decorate. This is also where you can grow crops and manage your Chumbi. Growing crops requires seeds and regular watering. Feeding your Chumbi makes them happier.

In addition, Chumbi Valley gameplay includes offline gathering, a built-in delegation system, and of course land ownership. Also, along with the gameplay comes a DeFi feature called the Shrine of Giving. Stake CHMB token to earn more CHMB tokens and NFTs as rewards. Assign a Chumbi at maximum happiness to increase your returns!