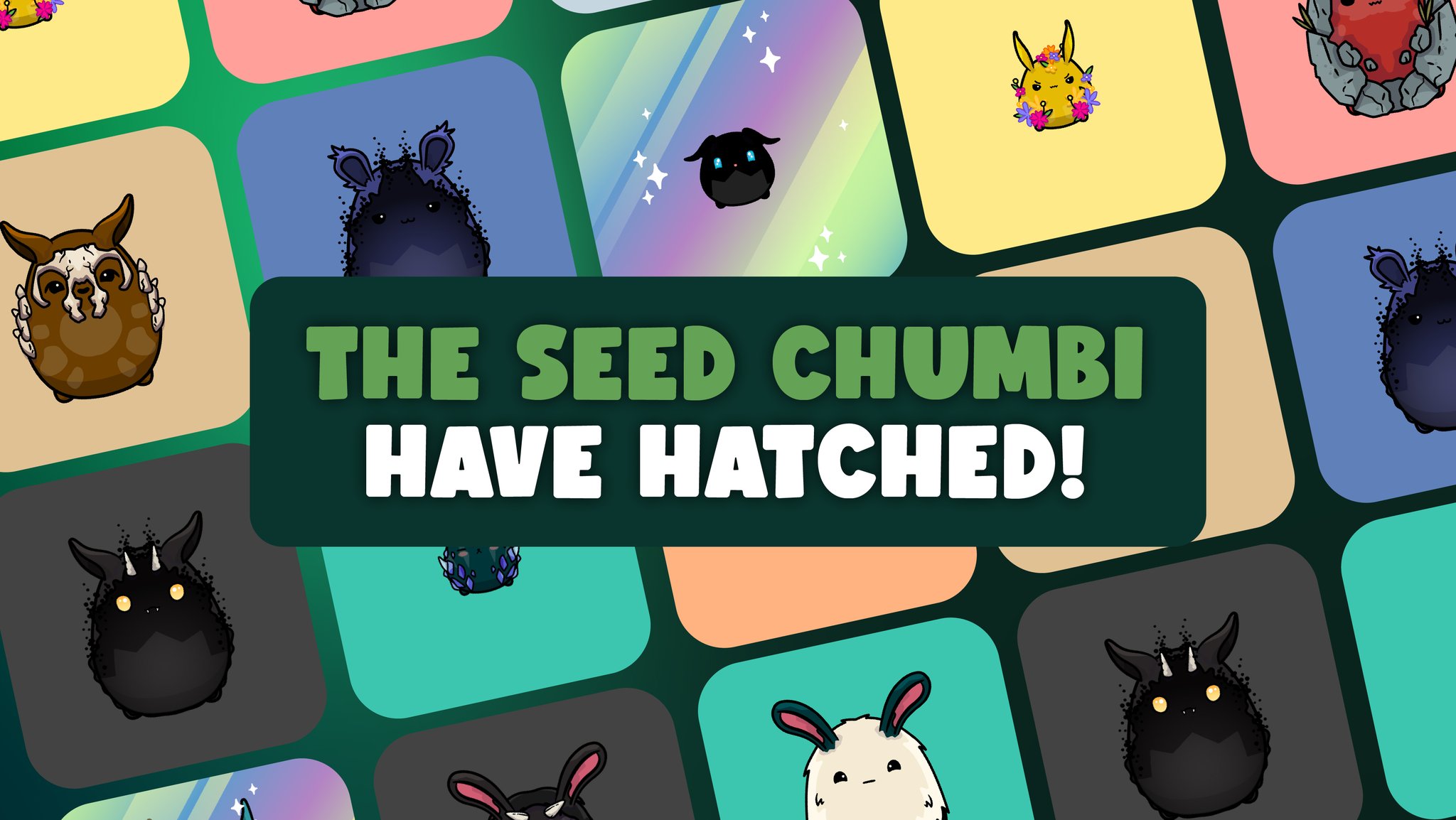 After the Genesis Seed sale back in December of 2021, Chumbi egg owners waited eagerly to see what sort of creatures lay inside. Those eggs hatched in January, revealing an assortment of different Chumbis. In addition to the egg hatching event, Chumbi Valley also announced changes to their staking system, and a partnership with OneRare, a food oriented game.

Many gamers love the feel of opening up a pack of collectible cards to see what’ treasures lay inside. I imagine the owners of the Chumbi Valley Seed Eggs felt much the same way when their eggs hatched. From River Spirits to Cave Frost to Mountain Insect, those seed holders are now proud owners of a variety of Chumbi types!

With seven different features, there is plenty of room for variety among the seed Chumbi. The rarest, Shiny Chumbis, have a rainbow background. The different Chumbi characteristics will have a big effect on the Chumbi’s stats and abilities. Their attacks are based on the Chumbi type and their coat while other features provide special effects such as Light Bite, or Luna Leer, and additional abilities.

This variety of options provides plenty to think about for both collectors and players, alike. And, of course, once breeding is implemented, savvy Chumbi owners will look for specific traits and characteristics when hooking their Chumbis up for new eggs.

Some of the rarer Chumbis are fetching quite a premium. One shiny Chumbi sold for 9.7 ETH!

Chumbi Valley released their staking system in mid-January 2022, with insane staking APRs of over 1000%! The plan had always been for the staking APR to start off high to encourage adoption, and then drop down to 100/150/200 % APR for the 3, 6, and 12 month pools respectively. But with 53 million tokens staked in the first 24 hours, the system was printing much more CHMB token than expected. Not wanting to flood the market with tokens, the devs implemented a change to reduce the staking rewards at a quicker pace. This began on January 19th, 2022 and staking return rates are now in the expected ranges. I do wonder why the APR rates weren’t automatically adjusted as more tokens joined the pool, but this seemed to be a manual process rather than an automatic one.

Currently there are over 100 million Chumbi token staked, earning nearly 300% APR for the longest staking period. The CHMB token and staking platform are on the Binance Smart Chain. Connect with Metamask at https://staking.chumbivalley.com/ to begin staking.

Note: The staking periods are fixed and have already begun. You can still add tokens to the pool, but you will only get credit for the number of days staked. Staking rewards and staked tokens can be withdrawn once the staking period ends.

In a rather interesting collaboration, Chumbi Valley is partnering with OneRare, a ‘Food Metaverse’. OneRare is building a recipe creation game, including 1 of 1 NFTs and rare recipe NFTs that become harder to make as more are created.

For Chumbi Vallyey, OneRare will be creating a special food menu for the Chumbis. Food items inspired by the forest valley the Chumbi live in. Chumbis need food for happiness and leveling up. It’s pretty cool to see a partnership that is creating meaningful content for the game. This kind of collaboration is great for the blockchain ecosystem and I look forward to seeing what comes from it!

What is Chumbi Valley?

Chumbi Valley is a tamer, battler game, much like Pokemon, built on the Polygon blockchain. Players breed and raise creatures called Chumbi. Players and their Chumbi explore, farm, breed, craft, and battle. The game is free to start. Each new player will be paired with an Ancestor Chumbi that can help you get started but which cannot be sold or traded. Pretty much everything else will be an NFT, allowing players to buy, sell, trade, and play to earn!

Much like Axie, Chumbi have various body parts, six in total — coat, ears, horns, eyes, mouth, and pattern. When born, each Chumbi has two attacks, 2 effects, and an ability. A Chumbi’s main type and its coat type determine it’s attacks, while, ear and mouth define it’s effects and the pattern it’s ability. And where would we be without breeding?! Of course players can pay some fees to create new Chumbi from two parents. Nearly everyone will be unique and some breeding attempts may create a very rare mini-Chumbi!

Chumbi level up as you use them. They learn spells, explore, find items and fight wild Chumbi. Feeding them makes them happier, and they must eat a special candied apple every five levels to continue progressing. Each player has a Forest Home area which they can decorate. This is also where you can grow crops and manage your Chumbi. Growing crops requires seeds and regular watering. Feeding your Chumbi makes them happier.

In addition, Chumbi Valley gameplay includes offline gathering, a built-in delegation system, and of course land ownership. Also, along with the gameplay comes a DeFi feature called the Shrine of Giving. Stake CHMB token to earn more CHMB tokens and NFTs as rewards. Assign a Chumbi at maximum happiness to increase your returns!