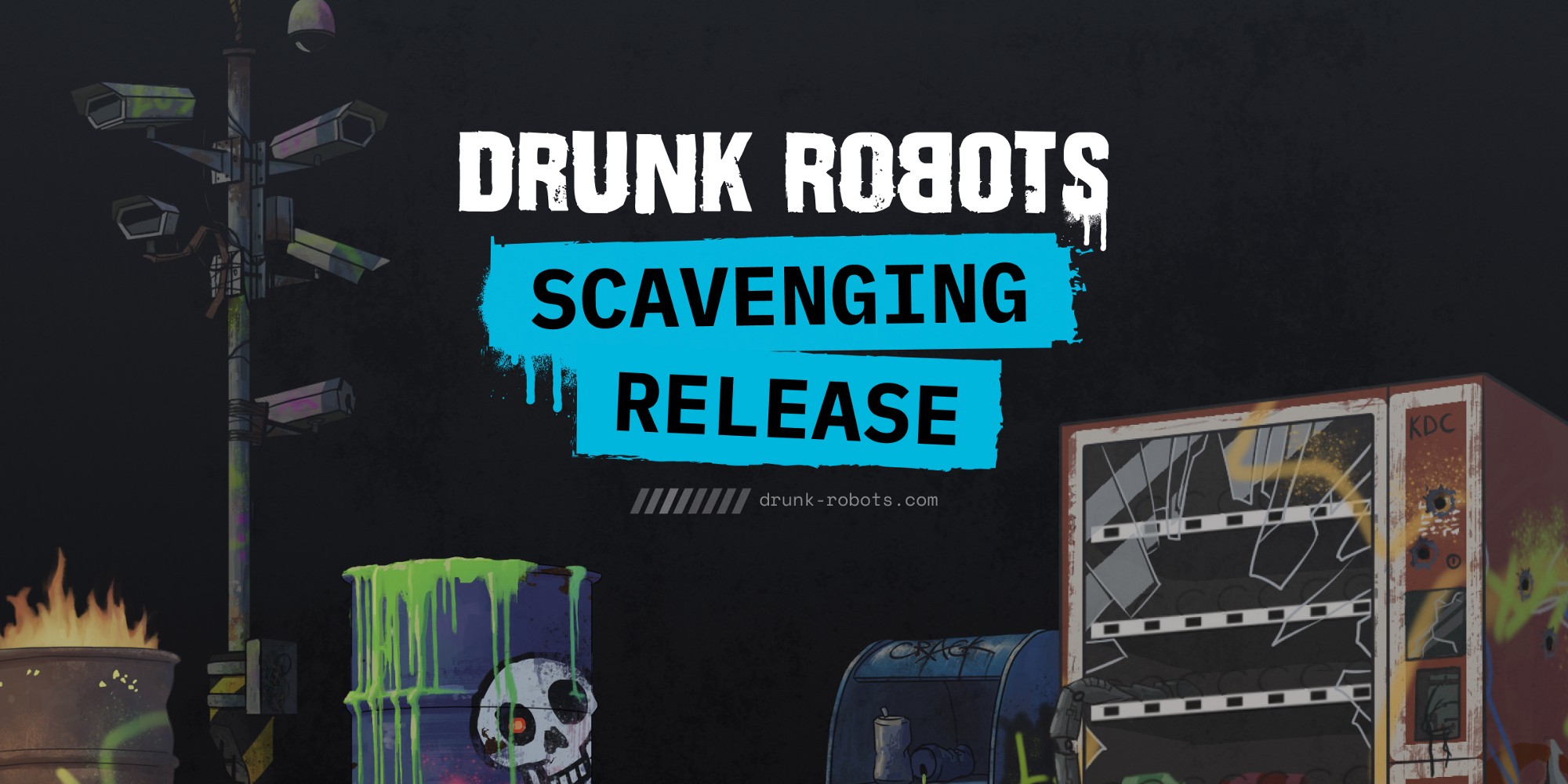 Most generative NFT projects these days seek to create an ecosystem beyond just the NFT images. And Drunk robots is no exception. Their universe features the Drunk Robots fighting, scavenging, dancing, and even farming! This latest update introduces a staking system, allowing players to scavenge with their Drunk Robots and earn JUNK tokens as a reward.

In the dystopian world of the Drunk Robots, existence is not easy. Drinking and fighting tends to wear on you after a while, even when you’re a robot. So those in need of repair seek out Mechanix. Mechanix work for free, but they need scrap metal and parts to do their work. Industrious robots who gather these scraps for them are rewarded in $JUNK, which can be used to purchase equipment and weapon containers. The special Scavenging Containers cost 1000 JUNK each.

Robot owners Scavenge by staking their Robots. As with most of these of these farming/mining pools, the daily reward pool is limited. Players receive $JUNK proportionate to the number of robots staked and the rarities of those robots. Each Robot has a hash power based on its rarity and equipped items. Equipment containers can not be opened yet, but expect that feature to arrive soon.

Owners can stake and unstake their Robots at anytime, though there is a small gas fee involved. Since this is on Binance Chain, it only amounts to about 10 cents or so per transaction. Once assigned to Scavenge, Robots begin gathering $JUNK immediately. Owners can claim the JUNK at anytime. JUNK will be used for in-game market purchases and market fees. If you own one or more Drunk Robots, you can start Scavenging now!

What is Drunk Robots?

Drunk Robots is a generative NFT project on the Binance Smart Chain featuring 10,101 robots. With the glut of generative art projects already in existence, everyone has to try and offer some sort of additional functionality. And so, Drunk Robots plans a series of play to earn games and activities. These involve fighting, robbing banks, racing, dance battles, and gang warfare. Drunk Robots features two tokens, METAL and JUNK. Players earn JUNK via a staking system, and METAL in-game.

The initial Robots sale has finished, and currently there is no secondary market, though the team promises to open up one ‘soon’. So for anyone who doesn’t own a robot, they’ll just have to watch from the sidelines for now.

The Drunk Robots universe already features a shoot-em-up mini-game with weekly rewards to the top players, and a staking system where Robots can earn the JUNK token. Launch of a PvP mode is expected at the end of January while Expeditions, PvE adventures for equipment loot and other rewards, should come later.