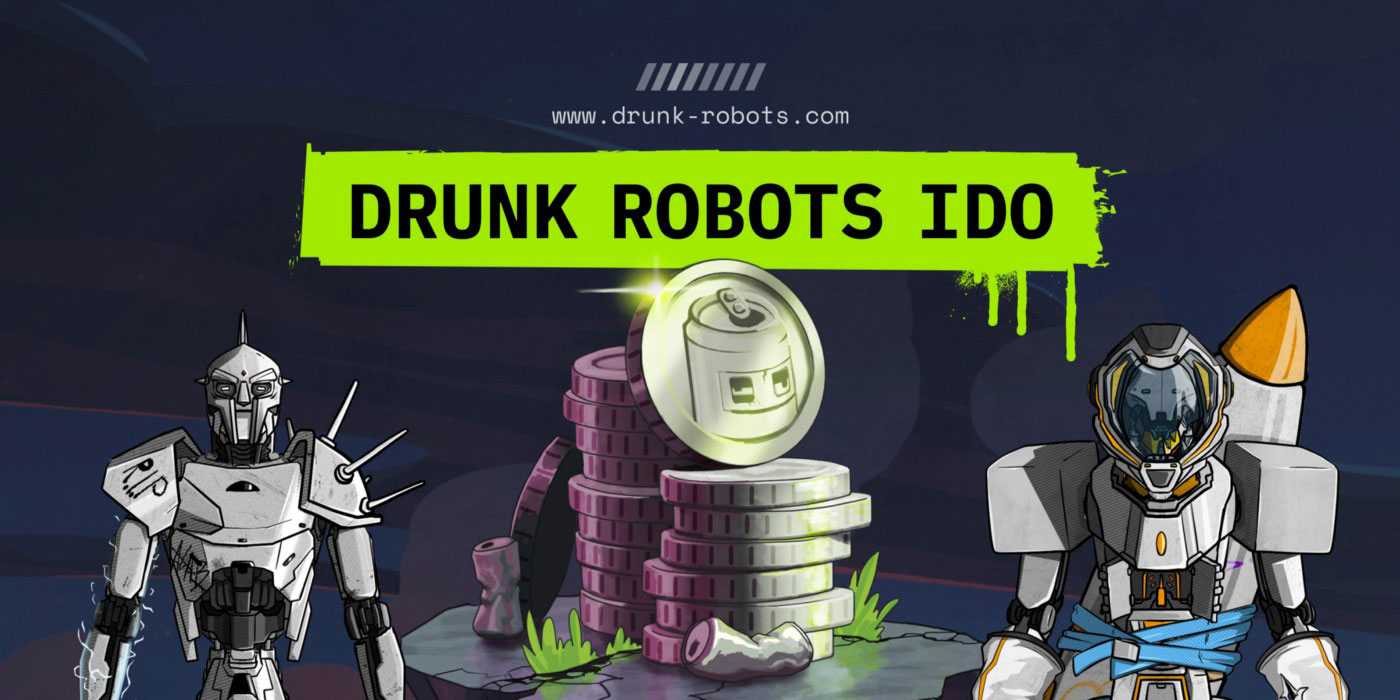 Highly anticipated upcoming blockchain game, Drunk Robots has announced Initial DEX Offering (IDO) sale for METAL token. The IDO sale will give investors, players, and enthusiasts to ape in the token on April 7th, 2022, across various launchpads. Meanwhile, the exact time will be made known to the public before the main event.

Drunk Robots is a blockchain game that features crazy robots as the main protagonists of its future world of Los Machines. Players must dominate the city by restoring sanity from drunk robots in the game.

The game’s economy is powered by a dual token system; the $METAL and $JUNK tokens. The $METAL token is the main in-game and utility token. As the main exchange asset, $METAL is useful as a marketplace tender. Players will also be able to unlock upgrades and special modes with the token. Meanwhile, players will be able to earn metal by participating in various in-game activities.

The IDO sale for the $METAL token will occur across three well-established launchpads. They include GameFi, TrustPad, and the game’s parent developer, Liquidifty. In IDOs, the tokens will be offered at a lower price before exchange listings. Therefore, it allows investors to support and fund the project while benefiting from the low IDO price.

As mentioned earlier, the IDO sales will take place on three launchpads; Liquidifty, GameFi, and TrustPad. Although token allocation differs with each launchpad, the token price on all the launchpads is $0.01. Further details for each launchpad are as follows:

To be eligible on Liquidifty, players must buy and hold NFTs. Meanwhile, IDO sales take place in three waves on this launchpad. Each wave depends on the membership level of each investor. For example, the first wave of the sale is for Solid members. Afterward, the Liquid member can participate in the 2nd wave, while Gas members will participate on an FCFS basis close to the end of the sale.

Like Liquidifty, GameFi also features a ranking system for its $GAFI token holders. Therefore, the maximum token allocation for each user after the end of the snapshot depends on their tier level.

With this, whitelisted participants complete KYC verifications and maintain at least Rookie-level before the end of the snapshot.

To use Trustpad, investors must hold and stake $TPAD, the launchpad’s native token. However, interested eligible participants must register their interest in the IDO sale. Registration for IDO on Trustpad opens 48 hours before the event. However, it lasts only 42 hours and closes 6hours before the main sale.

After getting allocation, participants must complete the purchase within 6 hours after the start of the sale.

Additional tokens will be available for other stakers and whitelisted wallets on a first-come, first-serve basis.

Drunk Robots will be developed on the BNB Chain (previously known as the Binance Smart Chain) in order to provde players fast, scalable and cheap transactions.

The total token supply is 2.75 billion $METAL token. However, a whopping 68.9% of the total supply is reserved for the in-game liquidity. Only 1.1% is available for public sales and team has an allocation of 13%, which is a fair average these days.

What Is Drunk Robots?

Powered by Liquidifty, Drunk Robots is set in a robot-dominated futuristic metaverse called Los Machines. Here, the sanity of the whole city is compromised by violence and… drunk robots. Therefore, players must seize the city with their robots and restore sanity while increasing their street credibility.

It features a regular PVP mode where players can join gangs to rule the city. Other mini-game modes include a top-down shooter, endless runner, and Drunk racing.

Apart from tokens, NFTs also contribute greatly to the in-game economy. The game has 10,101 uniquely generated genesis robots that players can recruit for various activities. Each has its specific attribute and rarity level from Common to Legendary.

Drunk Robots has a large social community and a good hype around it. It also has strong backing from partners such as Animoca Brands and Good Games Guilds.