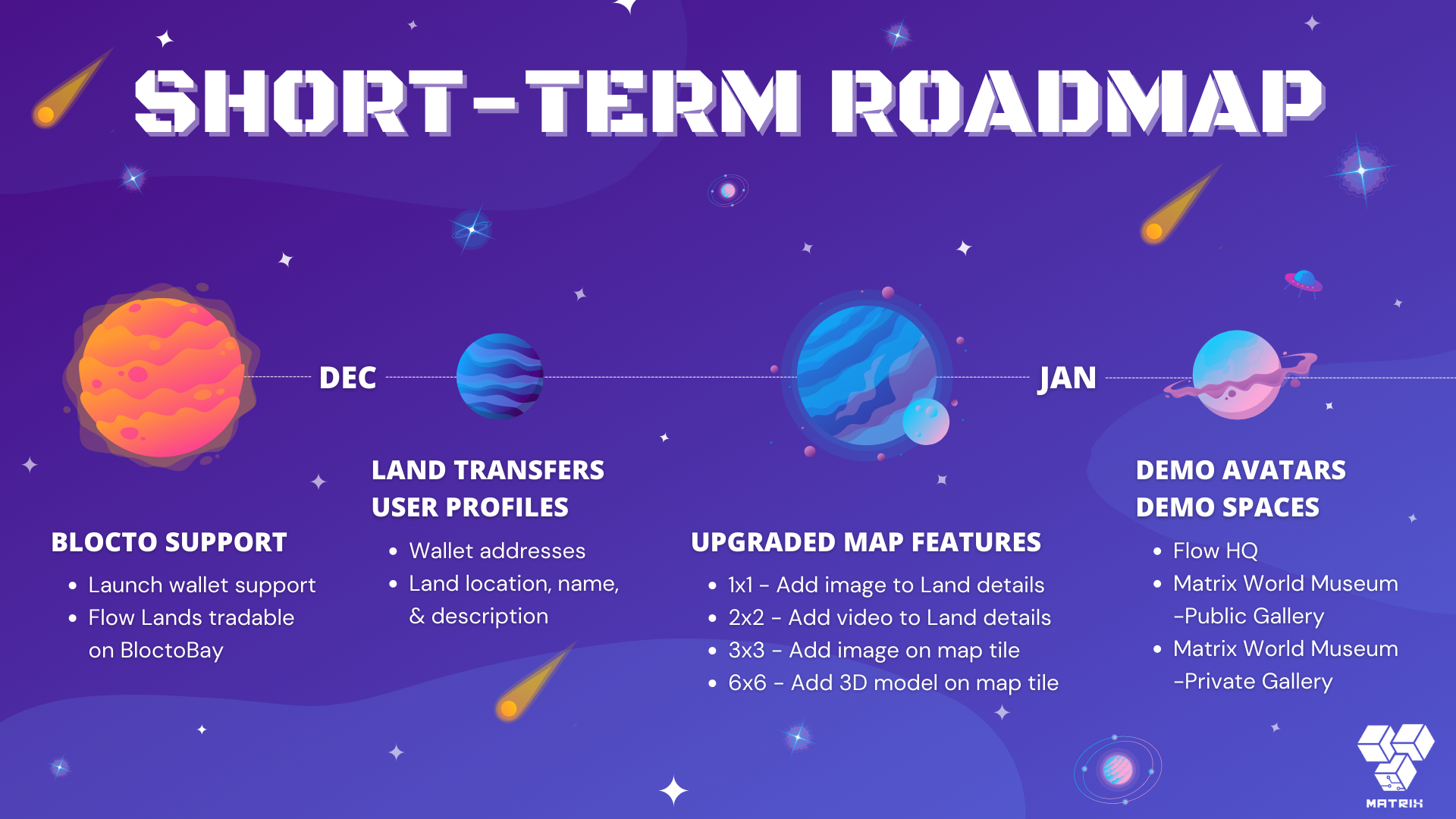 After a sell-out presale, the Matrix Labs team has released their short-term roadmap.  The roadmap details how the team will dedicate all efforts towards developing the Matrix World metaverse in the coming months.  A key highlight is the release of demo public spaces by January!

The Matrix World team is working to integrate Blocto.  By the end of November, Blocto users should be able to view Flow Lands in their Blocto wallets. They will also be able to trade Flow Lands through the BloctoBay NFT marketplace.

The Matrix World website will be updated with land transfer functionality and user profiles in early December. Matrix Landowners will be able to transfer Lands to different wallet addresses directly from the website. Users will also be able to view their wallet addresses.  Players will be able to add extra information to their Matrix Lands starting in mid-December. Land details will be accessible from the User Profile page and will allow users to customize how their Lands are displayed on the map.

The Land Details and the Land Map will allow Landowners to add images, videos, and 3D models based on the size of their Land.

Players will be especially excited by the demo of public spaces. This will offer a first sneak peek at public service buildings and sample 3D DApps.

What is Matrix Worlds?

Matrix Labs is a Vancouver based blockchain technology company developing Matrix World.  Matrix World is 3D, open, virtual world that provides more control and functionality to landowners than most online worlds. Owners change more than just the visual appearance and properties of their space. They can create traditional 3D open-world features such as buildings, virtual meetings, and NFT displays. But Matrix World also allows for more complex interactions like hosting decentralized apps, games, and marketplaces. One example given is the creation of an in-game ‘ATM’ that connects the swap function of a DEX behind the scenes and lets users easily switch currencies while in the virtual world.

Each space holds Matrix Objects, programmable, scriptable components that can interact with each other and with outside resources. Matrix World also plans a wide selection of tools. From object and scene editors to automated creations from blueprints, to programmable NFTs.