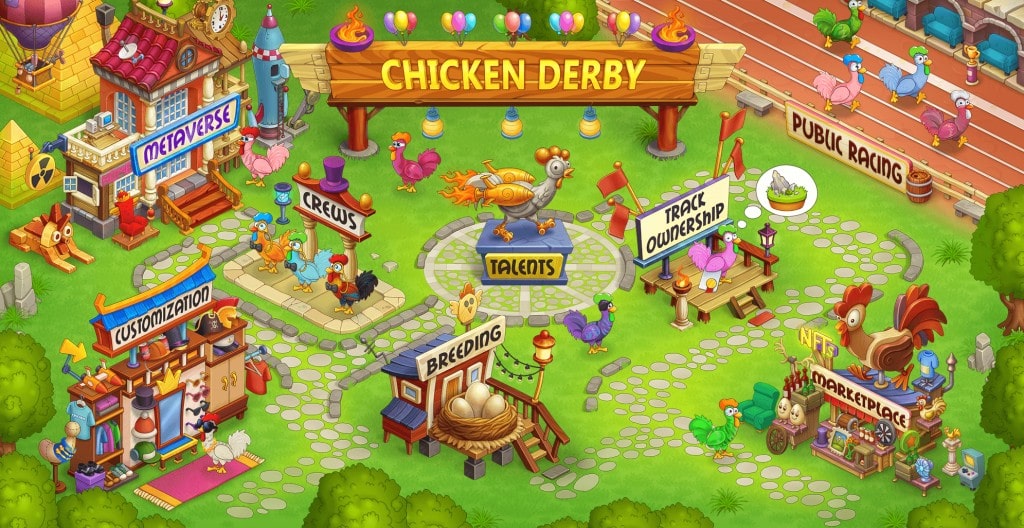 Chicken Derby continues to develop their Chicken racing game by adding racing seasons. Seasons award special badges for the top finishers, and should help reduce the number of players who were gaming the system and racing high performing Chickens in lower Pecking Orders.

After recently adding equippable wearables to their game about racing Chickens with special powers, Chicken Derby looks to revamp their leaderboard calculations with the addition of Seasons, starting on December 19th.

Chicken Derby features five distinct groups of races — Chick, as well as Pecking Orders D, C, B, A, and S, with S boasting the toughest competition. Chick is also a special Pecking Order. available only to Chickens who have raced less than five times ever.

In the current ranking method, chickens move freely between the Pecking Orders based on their finishing position in races. This has led to a number of players gaming the system and purposefully de-ranking their Chickens with cheaper cost races so they can enter higher cost races at lower ranks.

And so, to combat this behavior, Chicken Derby is implementing seasons. At the start of each Season, every Chicken has their POP (Pecking Order Points) set to 100. After each race, Chickens gain or lose POP based on their finishing position. This ranges from +5 to -5 points.

Then, at the end of the season, the top 20% from each Pecking Order receive a special season badge and move up a Pecking Order,. The bottom 20% move down a Pecking Order. Then all of the Chickens have their POP reset to 100 and the next season begins. Chickens must run at least one race during a season to be eligible to change Pecking Order.

As additional incentive, Chicken Derby will weight the payouts for free races so that higher ranked Pecking Orders have larger payouts.

The first five seasons will be only two weeks long, giving the team a chance to make changes and adjustments as needed. After that, starting in March 2023, seasons will run for a month.

In addition, Chicken Derby plans to launch a new ‘Christmas Cracker’ tournament. This tournament begins on December 19th, 6pm CST, and runs for two weeks. Chickens earn points based on placement for each race run during the tournament. After the two weeks, Chickens with the top 10 number of points in each Pecking Order receive special prizes including Santa costumes and Fusion Serums (Serums will be used in an upcoming Chicken Fusion feature).

What is Chicken Derby?

Chicken Derby is a chicken racing simulation built on the Polygon network. Each Chicken is a unique NFT that can be entered into races for paid prizes.

Chickens come in four Heritages — Serama, Sultan, Lakenvelder, and Dorkling, in order of rarity. In addition, there are a number of random cosmetic traits for each Chicken. Ranging from standard white feathers to tiger patterns to robot chickens! Every Chicken also has a special Talent that can trigger during races. This can be something as simple as a short flight, or as extreme as creating a black hole!

With seven different terrain types, six different track lengths, and twelve Chickens per race, each with their own preferences, abilities, and racing styles, Chicken Derby features enough variation to ensure that the race outcomes won’t be predetermined. There are also a number of ‘Easter Egg’ type bonuses that the team adds to the official documentation once the community figures it out. For example, Chickens with Alien Eyes get a boost to their Teleport ability (if they have it).