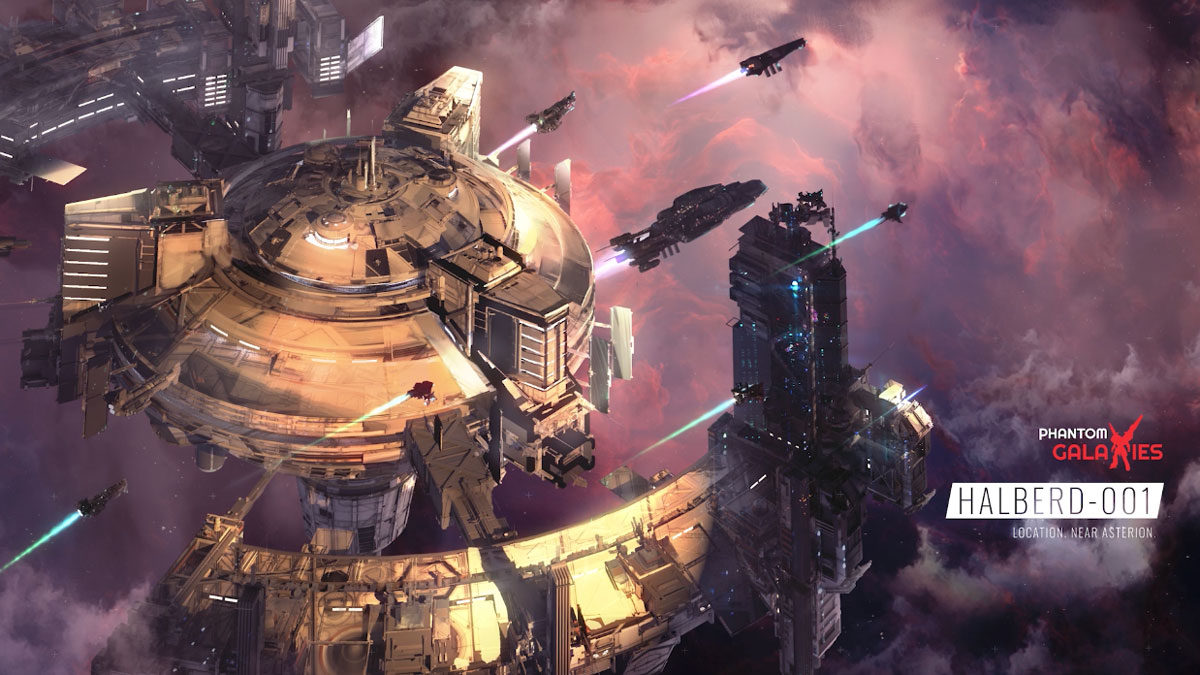 Phantom Galaxies updated their website recently, announced Mintpass rewards allowing holders of certain NFTs the ability to mint new, limited edition NFTs, and also provided details about their imminent Planet sale. Phantom Galaxies has built a system of acquiring and merging Medal and Poster NFTs in order to create rarer versions. They are using this system to build a whitelist for new, special NFTs, and also tie into their upcoming planetary land sale. This system is designed to reward those who are actually playing and participating in these early alpha releases.

Phantom Galaxies is currently running a closed alpha available to those who own a Halberd-001 NFT. Two Episodes are available for play, each with a continuing storyline and numerous missions. Completing Episodes opens up new rewards and NFTs. At a later point, owning sets of NFTs will allow players to claim Mintpasses. Mintpasses will be used to generate new NFTs.

The team released an infographic outlining the rewards and requirements. But there is a lot going on here, so I’ll break some of it down for you.

These first Phantom Galaxies NFTs are referred to as Origin NFTs. And it all begins with the Halberd-001 Poster NFT. These NFTs were airdropped to those who connected their wallets to the Phantom Galaxies website last year, before the game was ever released. Owning an Episode 1 Poster, and earning a badge for completing Episode 1, allows the player to claim the Episode 1 Medal and a Redeemed Poster. Acquiring the Episode 2 Poster requires merging five Episode 1 Posters into a Shining Star Poster. Then, complete Episode 2 and claim the Episode 2 Medal and Redeemed Poster. In all, there will be four Episodes for the closed alpha, each with a Medal and Redeemed poster as reward for completion.

All of this leads to collecting full sets, which provide Mintpasses. Collect a set of Unredeemed Posters and receive a Mintpass for creating a collectible, Pristine Fleet Generative Starfighter. A set of Redeemed Posters opens up the chance to acquire a Veteran Fleet Generative Starfighter. A full set of Episode Medals leads to Zveta Gene Generative Avatar while a Hopeful NFT (airdropped to early Discord members) allows the holder to mint an Elpis Gene Generative Avatar. And for those with everything, you get all the stuff!

All claiming and minting can be done on the official site. The team recently released an updated NFT page where you can see the combinations available.

As has become the tradition in blockchain gaming, Phantom Galaxies will be holding land sale. Or more specifically, a Planet sale. Planets in Phantom Galaxies are procedurally generated and range in size from a Small Asteroid to a Large Planet. Planets have a limit on the number of players they can host simultaneously. This can be as small as a squad of four players on a Small Asteroid, to thousands of players on a Large Planet!

Planet Holders earn passive income in the form of PGToken, the Phantom Galaxies Governance token. In order to provide extra incentives for Planet owners to fully engage with the game, Planet Galaxies plans an emissions multiplier. This multiplier increases the number of tokens earned. Owners boost their multiplier through developing their planet, convincing players to visit, and staying active in the game.

The Planet sale occurs in two rounds. The first, a private sale, offers partners and guilds an early opportunity for buy-in. Once the private sale completes, a Public sale follows soon after. Anyone with a Hopeful NFT will be given a ‘Presale A Ticket’, and anyone with an Episode #2 Medal has a chance to receive one of 7,500 ‘Presale B Tickets’. Holders of Presale tickets will have a window to purchase a planet 1 hour before the public sale opens.

But with this Planet sale comes Planet-sized prices. Though not set in stone, the last numbers we received from the Phantom Galaxies team has a Small Asteroid costing $354. That’s actually not unreasonable for what is expected to be a significant part of the game. On the other end of the spectrum, Large Planets will cost $150,000!

Apparently, the Private sale is nearly complete and the details on the public sale should arrive ‘very soon’.

The initial launch for Phantom Galaxies is on the Polygon blockchain. Long-term plans include multichain support, where each chain has its own home galaxy but players can still interact. Closed Alpha is available now on both PC and Mac, with early access beta expected to launch in Q3 2022.