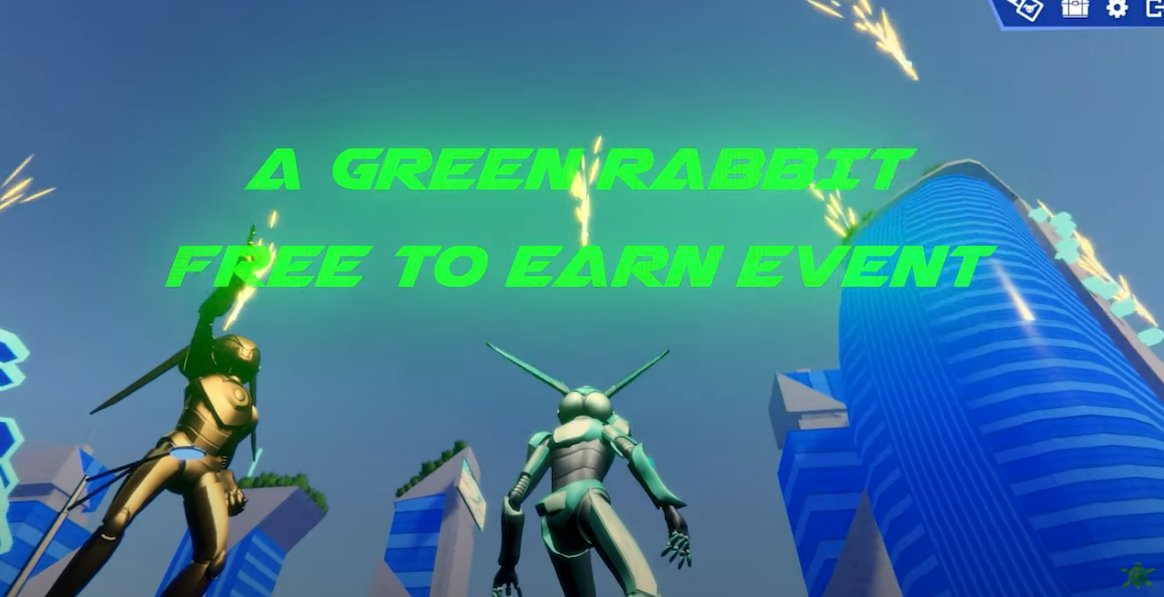 We talked not long ago about Green Rabbit’s new social hub and the first alpha release of their racing event. One of the main issues I had with the Hub is that the novelty wore off quickly and there wasn’t much incentive to hang around. Since then, the Green Rabbit team has hosted several, short-term events where random, active players in the game were rewarded with WAX prizes. But now, Green Rabbit is ready to step up their game with a new free to earn event that ties in with their upcoming Apartment sale.

Beginning on April 25th and running through May 14th, the Green Rabbit hub will see periodic Orbital Crate drops. Every five minutes, three loot crates drop from the sky in the Hub. Grab a crate, and then run races to unlock it. The crates include various Green Rabbit treasures. From crafting ingredients, to Promo NFTs, to Forager packs! To participate, all you need is a Green Rabbit account with a linked WAX wallet. The game launcher can be downloaded from the official site.

Crates drop from the sky with a visible trail, though you have to be looking in the right direction at the right time to catch them. The Green Rabbit team says that they are working on including an in-game announcement along with a more visible entry graphics for the crates.

Once a player locates and grabs a crate, it shows up in a special crate inventory. To unlock the crate, the player must complete races for unlock points. Players receive points based on the number of participants in the race and how they place. Players can earn up to 5 points for finishing first in a 5 person race.

Unfortunately, racing is still kind of lame, in my opinion, though they have added and improved on the experience since it was first released a few weeks ago. Personally, I would love to see branching pathways with pros and cons for choosing a certain path, meaningful player interaction, obstacles to jump over or slide under — things like that to make the races more interactive. As it is now, the only reason to race more than a couple of times is to open the Crates.

Anyway, these Orbital Drops are the just the beginning of what will be an ongoing reward system in Green Rabbit. In the future, owning an apartment in the Green Rabbit Hub will provide opportunities for even better Orbital Drop rewards!

And since, free to play and play to earn opportunities are relatively limited in the blockchain gaming space at the moment, it’s probably worthwhile to check out the Green Rabbit Orbital Drops.

Players who want a little personal space in the world of Nanotopia will have the chance to purchase their very own apartment on April 30th. Apartments are 3D spaces which begin unfurnished, but can be equipped and decorated. Players can invite others to enter their apartments, with an occupancy limit based on the apartment size.

Each Apartment purchase comes with a Companion. At the moment, Companions are just decorative pets that follow their owners around. However, the devs have plans to incorporate a Tomigachi style, pet raising game for Companions that will provide additional utility.

The Apartment sale begins on April 30th and will occur on the Shell Road marketplace on the Green Rabbit site. Prices range from $99 for a small apartment, up to $1000 for a Penthouse. Apartments from this first sale are considered Genesis Apartments. Future Apartment sales won’t have this designation, and will also have decreased earning potential.