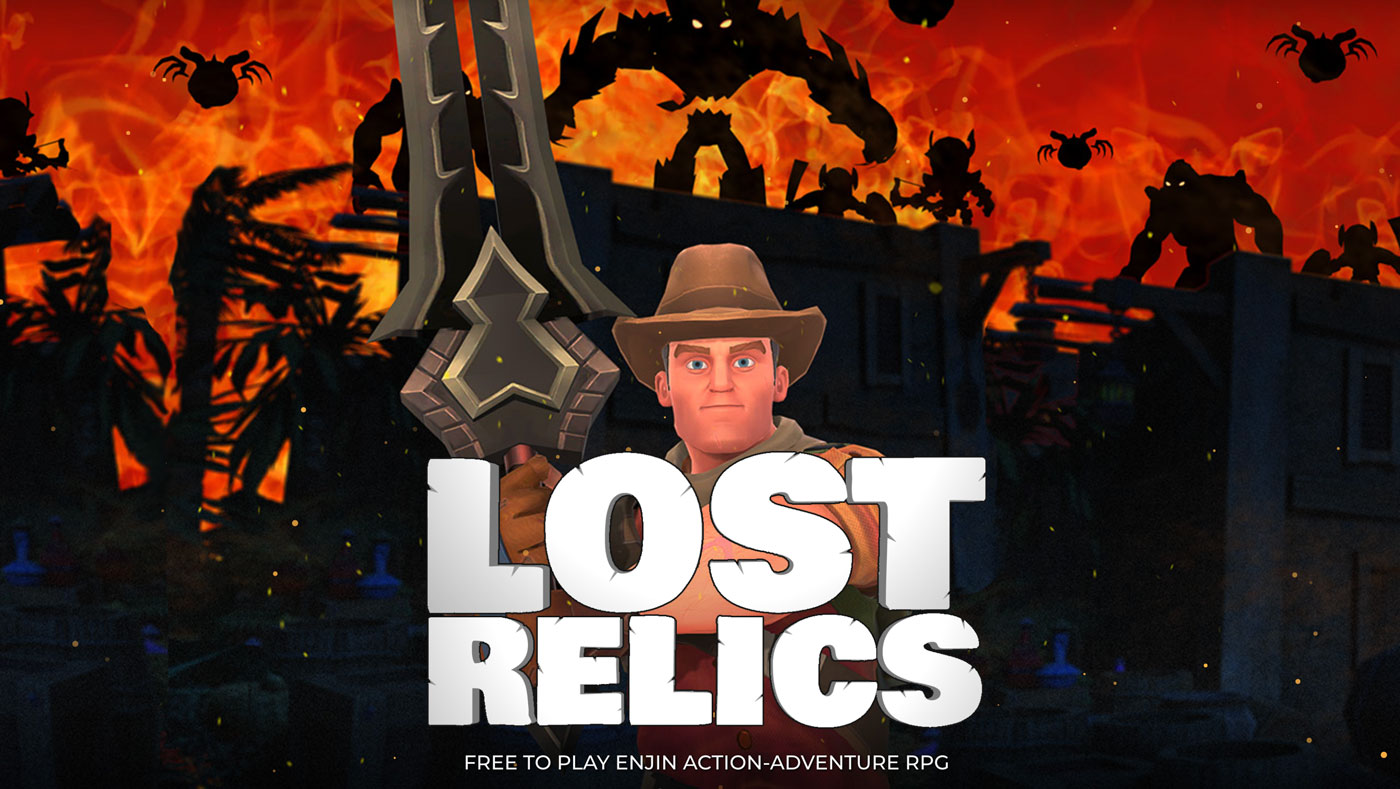 Lost Relics is an adventure role playing game in which you venture in dungeons filled with monsters and traps looking for NFT items. An ambitious project released in 2019, but with new projects coming out every week and big studios joining the NFT gaming space, does Lost Relics stand a chance, and is it still worth playing the game?

What is Lost Relics?

Lost Relics, previously know as Forgottern Artifacts, was released on May 23rd 2019. Players were able to play the pre-alpha version and start collecting NFTs on this Enjin play to earn ARPG!

Cliff Cawley, the one-man army developing the game had the vision before anyone else. Developing a play to earn game that was looking like diablo or torchlight and introducing NFT items way before it became the big trend it is now.

In this game you go into dungeons filled with monsters and traps and have to survive and find the exit!
In each dungeon there will be chests that can have gold or shadowstones, two of the game virtual currencies or virtual items.

Gold is used mostly to buy items like food from other players to heal your character while in a dungeon! Shadowstones can be used to buy items from the game’s marketplace. This marketplace allows players to trade blockchain items directly in-game, without any gas fees.

So, when you go to the marketplace, the Emporyum, you can either buy virtual items with gold or NFTs with Shadowstones.

Since you can’t see other players this is one of the only way right now to interact with them. The other is through the global chat system. In the future Cliff already mentioned that we’re going to have co-op dungeons!

In order to get started in Lost Relics you just need to go to their website, register and wait. If you don’t want to wait you can always buy a 7-day pendant that will give you instant access to the game. Pendants give you lots of benefits like access to premium dungeons for example! Worth to invest in one if you’re playing the game frequently!

This project has been receiving new updates where we’ve been seeing new maps, new monsters, new professions and new items!

Four months ago everything changed for Lost Relics and there’s the rumor that a brand new BIG update would come out really soon!

The initial hype is partially lost..

Lost Relics lost a bit the hype that it once had when it was released and we’re seeing new projects in NFT Gaming getting much more traction than Lost Relics, despite being around for 2 years.

I believe there are multiple reasons why this happened.

The first one is that the play-to-earn mechanics are not well thought. I’ve spent countless hours grinding in Lost Relics dungeons and my NFT collection in this game is worth 68 enjin, that’s around 88 USD if I’m able to sell all my items.

It’s very rare that an NFT drops while exploring a dungeon, and if it does, they are usually worth not more than a few dollars. My rarest weapon is an epic blockchain bow that costs $20 USD at the moment. I had to play the game very regularly for 3 months to find such an item…

The competition is heating up

The second reason is that when Lost Relics was released, there wasn’t much of a competition. But that is changing fast with big titles like Guild of Guardians, Ember Sword and Synergy lands coming out this year!

These projects are being backed by a full development team that can bring new features much faster than what is being done in Lost Relics.

Also these games are going to come out with a bunch of features that are missing in Lost Relics like skills and classes for example. In Lost Relics, the combats are still too simple, left click for normal attack and right click for a special attack. Special attacks have the same animation as the normal ones, so you won’t even notice the difference!

A bit too repetitive

Another thing is that the game is just too repetitive. If you don t own the pendant that gives you access to the premium dungeons you’ll spend lots of time grinding the same dungeons over and over even though dungeons are randomly generated.

Enjin was the first gaming blockchain

Enjin didn t have that much competition two years ago. But over the past year, we have seen many blockchain games being developed on Polygon, BNB Chain, WAX or Solana.

But there is still potential

Even though the project is facing many challenges, I believe that Lost Relics still has a lot of potential. Lost Relics is still the only playable ARPG in NFT Gaming!

Cliff is releasing updates at a faster pace and we’ve been seeing the world of Lost Relics receiving lots of new features.

It has a small but loyal community with lots of streamers and content creators.

The game is fun to play. There’s some thrill when you re in a dungeon and you fall into a trap, run out of healing items and you have to find the exit in order to keep your items.

Personally, I like to play it casually. It’s a fun game but not the game that gets me hooked into my computer for countless hours.

If you’re into Lost Relics I recommend you check this video that will give you some tips and tricks and will increase your odds of surviving in this game’s hardest dungeons!

There’s a good rush of dopamine every time I slay a boss or open a chest. You never know what might be dropped. It can be just gold, Shadowstones or a very rare NFT!

Obviously dropping one of this is like winning the lottery; your chances are really low.

The game is still in Alpha, so obviously this isn’t the final product. And the truth is that, until now, no other game managed to have a decent and sustainable economy on the long-run.

Maybe Axie Infinity had it for a few months, but that is over. Pegaxy still has it, but we’re seeing a decrease in PGX, VIS and the price of pegas themselves.

Maintaining a stable economy in a videogame has been a struggle and the ones who achieved it only did it for a short period of time.

From my perspective Cliff should try to get some investors to back this project and hire a development team to speed up the process of building this game, because there is potential here!

The game has good graphics, fluid gameplay and, even though it’s incomplete, it manages to get around 1,500 players playing every day!

When choosing to invest time in a game, I always ask myself 2 questions: Is it fun? How much can I earn?

From my experience, Lost Relics is fun to play casually. If you grind too much you will get tired of it because of the lack of content, which is completely acceptable in an Alpha!

And to the second question the answer is: not enough!

So play the game just for fun if you like it, it’s good for an alpha version. But don’t expect to get a decent source of income by doing so!

if the player-base increases, the demand for the game’s NFTs should increase as well. So it could be a viable option to grind some NFTs and hold on to them.

If this happens or not will depend entirely on Cliff Cawley, the one-man army behind Lost Relics. But it would certainly be a shame to see Lost Relics, one of the first NFT game, being forgotten and disappear.

To learn more about the game and how to get started, check out our Lost Relics Game Guide.