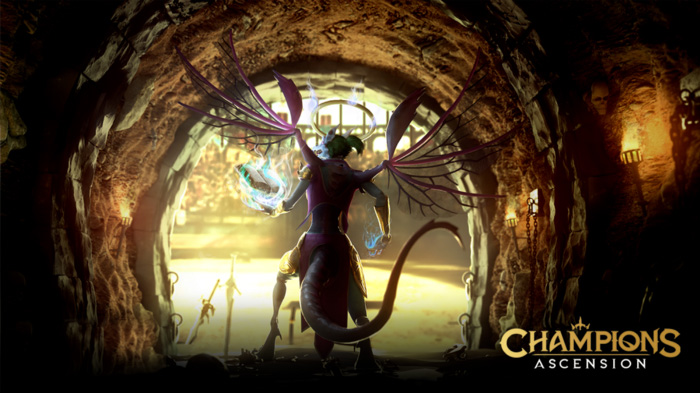 By the time you read this, it may be to late to get on the whitelist for the first NFT drop of Champions: Ascension, but there will still be an opportunity in the public sale. These first NFTs, known as Prime Eternals, are considered Founder’s NFTs and expected to provide ongoing benefits to holders. So let’s take a first look at Champions: Ascension, an MMO / gladiatorial combat game in early development on the Ethereum blockchain.

Battle for honor, glory, and rewards in Champions: Ascension, a high fantasy, roleplaying, arena battle game. The gladiators, known as Eternals, are engineered creatures, imbued with primordial essences to grant them special powers and abilities. Created for combat and violence. Factions center around each Essence, and winning or losing in the arena can affect the standing of the associated faction.

The drop opens for whitelisters on February 24th at 8am PST. If you’re not sure of your status, you can connect a wallet on the official site (https://champions.io/whitelist) and check. The public sale opens a day later, February 25th, also at 8am PST.

Each Prime Eternal costs 0.3 ETH during the whitelist, limited to one NFT per wallet. The public sale, however, is a Dutch auction, starting at 1 ETH! Not the cheapest mint around, but the team considers these NFTs equivalent to founder’s tokens. And one way to think about investing in founder’s NFTs, is to equate them to Kickstarter. By paying a little extra and buying in early, you receive special rewards to help a small company or project get off the ground. And while Kickstarter rewards are generally one-time affairs, NFTs can keep giving for a long time, especially if the game does well.

The planned rewards for Prime Eternals include special airdrops, exclusive poses and emotes, rare headpieces, early access to new features, and membership in a private Discord channel with sneak peaks and chats with the development team. Prime Eternal owners receive exclusive voting privileges that can help direct the game development and story. The team also mentions staking Prime Eternals and earning $MASSINA tokens, which will be used for purchasing lands. And that’s really just the start. The team promises many exclusive perks and benefits for owning a Prime Eternal. Including a free pet!

When minted, the Prime Eternal NFTs look like an egg. These eggs hatch on March 1st, revealing each unique Prime Eternal, including it’s specific metadata that will determine just how unique every Eternal might be from the rest.

The Champions: Ascension team released a seemingly aggressive roadmap. Though I guess if the video above accurately shows what they’ve already done, then their goals may not seem too far-fetched! This game is being built by Jam City, an established company with a number of released games already in their portfolio.

The roadmap includes quite a bit just in ‘early 2022’. The team is completing a first large milestone with this Prime Eternals sale. After that we should also soon see the first airdrops to Prime purchasers, a token release with staking options and rewards, staking gameplay, champion battles, ascension mechanics, and bio-engineering new champions! For mid 2022 we have new battle modes, land ownership, and gear forging (from the bones of fallen opponents, apparently!) That’s quite a project list! On top of that, the team also regularly releases new lore and stories.

I certainly hope that they do meet all their goals. Because it looks like they have a unique game in the works. There will be plenty of competition for notice as a number of blockchain games will be releasing alphas and betas this year. But what Champions: Ascension has already shown us looks pretty good! Keep an eye on this game!