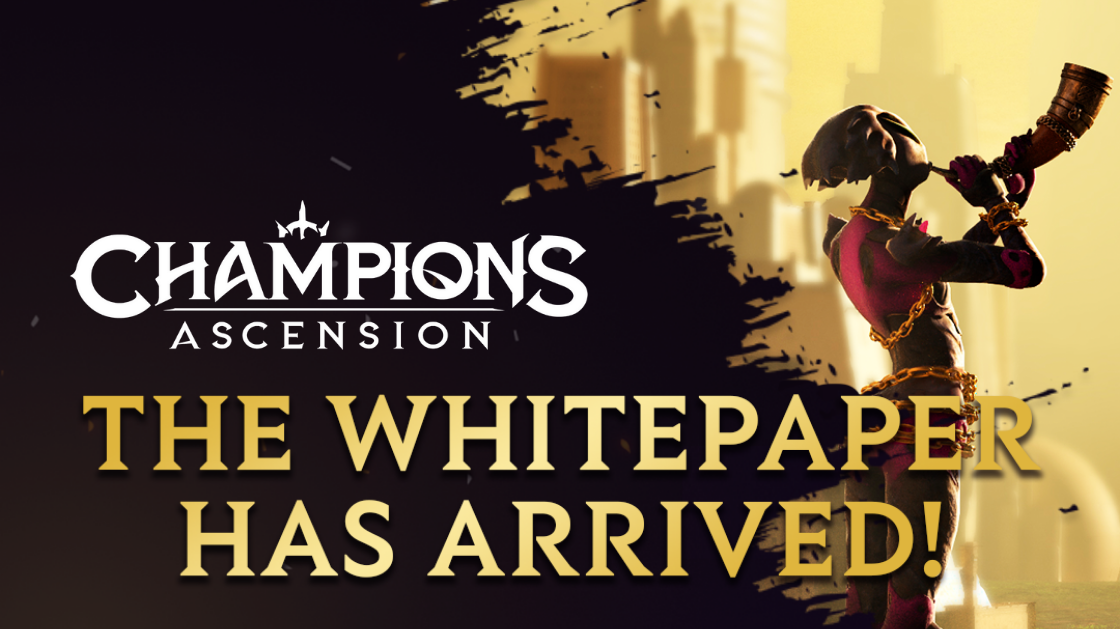 Champions Ascension, the gladiator-inspired AAA game on the Ethereum blockchain, released the first version of their whitepaper, detailing the tokenomics and Champions’ stats.

After a successful Prime Eternal Gladiator sale, the team at Jam City is pushing forward their roadmap and confirming some more details on the upcoming title.

Following the 0.3ETH mint price, new players interested in joining can purchase Eternals on the secondary market, with a current floor price close to the mint value. Holding an Eternal grants special access on Discord, community-reserved events, and airdrops for game tokens.

The Whitepaper doesn’t go into many details when it comes to gameplay. However, the developers did shed some light on it.

The game will feature multiple game modes. Some will be AI-led, and some will require interaction with the Champions. Almost all of them will be held off-chain and results should then be transferred on-chain.

It doesn’t look like the game will feature a free-to-play model, as all players need a Champion to join.

Champions in the game can die, breed, and gather materials through finalizing quests. Materials can be used to craft higher-level items, increase the rarity of gears, or ascend the champion.

Champions Ascension will have a land play, which will actually be released as the first game mode. Lands can host buildings, and players that own one can build them for the use of the community. Of course, landowners will get a fee for each time another player uses resources on the land.

Champions are the main NFT of Champions Ascension, and they will give you access to the plethora of gameplay modes aforementioned, along with unique experiences outside of the game.

Each Champion belongs to one of 12 Families grouped in 6 Classes, 2 Families per Class. There are also 7 Essences that each Champion gets their core power from:

Essences have their advantages/disadvantages against each other, which is one of the crucial parts of the combat rules.

Each Champion can have up to six different sorts of functional parts. Each functioning part has its own set of stats, and each part contributes differently to the Champions’ overall stats and skills.

Each Champion has 5 active (of 6 total) functional parts, which means one of them will be suppressed. However, the genes for all 6 will be present so it can be passed on when breeding new Champions.

Each functioning component is infused with one of the seven Essences, and when the essence of the part matches that of the Champion core, the part’s stats are boosted.

All the playable Champions are categorized into 4 tiers.

Champions of a lower tier can be ascended to the next higher tier after meeting certain prerequisites, such as reaching a certain level at their current tier and completing an ascension challenge. To Ascend your Champion you will need to expend tokens and in-game resources that you can earn through gameplay and fighting other Champions.

Champions cannot ascend to the Prime Eternal tier. Prime Eternals that breed cannot pass down their divine functional parts, and the rarity for divine parts will increase once more Champions are bred and the population increases.

The game designers didn’t go in great depth in relation to the upcoming tokens for the game. None of them is listed on exchanges right now, but we already know there will not be a fixed supply for any of them, and that Jam City wishes for the game to be operated by a DAO as soon as possible.

The three main tokens we know will be present are:

Jam City is building most of the infrastructure on Evmos, to make it easier to onboard new players, and is finalizing its development process through Unity and internal frameworks.

The developers confirmed the game will be available through web browsers and all kinds of devices, including mobile ones. Jam City built games played by billions of people, and their in-app purchases generated an income of over 2.5 billion as stated at the beginning of their whitepaper.

Through the combined experience of MySpace co-founders and CEO, plus a lot of talented individuals coming from the most important companies in the World, we’re confident Champions Ascension can be a game to look forward to.

You can read the whole, detailed whitepaper here.