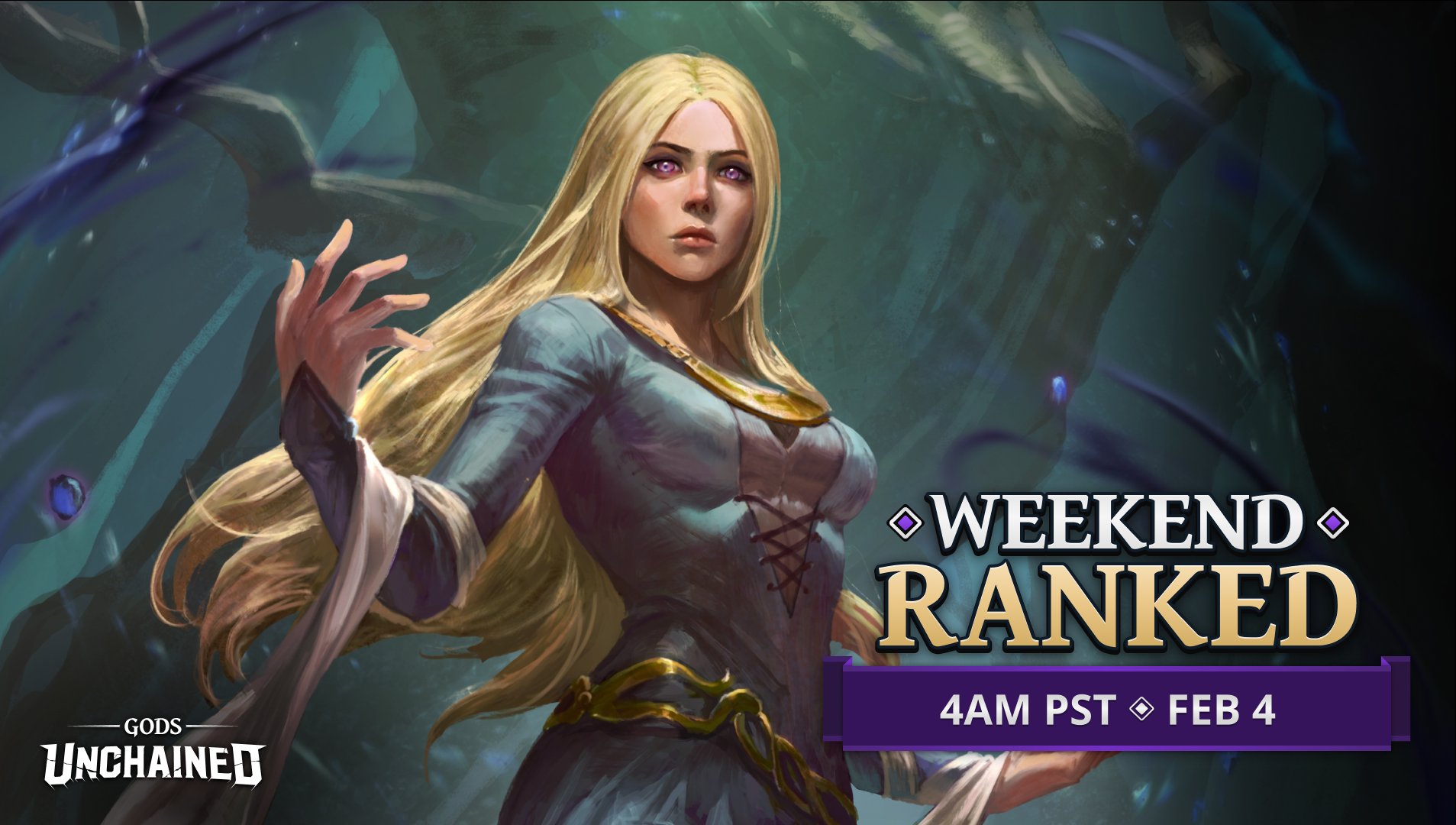 The weekend tournaments have been an ongoing staple in Gods Unchained for quite some time now. Players received packs from the Core set and the latest expansion as rewards for playing and winning during the weekend. But now it’s time for some changes. Pack rewards have been tweaked and GODS tokens added to the prize pools!

Gods Unchained has featured true play to earn (or play and earn depending on your focus) functionality with their Ranked Weekend events. They hand out hundreds of card packs every week, many from the latest expansion set. But with the introduction of the GODS token, and some ongoing issues with players trying to game the system in bad faith, the team introduced some changes to the weekend rewards.

De-ranking, the act of purposefully lowering your rank before the weekend so that you can face lower ranked opponents and still reap a nice set of rewards, has been a minor, but annoying issue with the Gods Unchained Weekend Tournaments. This was generally done by players of Mythic rank who felt they could grab more wins and better rewards if they faced mostly lower rank opponents.

To combat this issue, the Gods Unchained team, decided to offer a carrot rather than raising a stick, by increasing rewards for Mythic players. Legendary pack rewards come earlier at Mythic rank, beginning at 15 wins and increasing to as many as six Legendary packs total (three Core and three expansion) for 22 wins and up! Expansion pack rewards have also increased. Even one win at Mythic rank gives out one rare expansion pack in addition to two rare Core packs! It takes eight wins at Ethereal Diamond rank to reach the same reward level! Pretty sweet incentive to stay at Mythic.

This update is not only for Mythic ranked players. Lower ranks also received a significant boost in the number of Core packs received as prizes. This helps newer players build up their set of cards and have more options when deckbuilding. Check the official blog page for a full breakdown of the rewards at all ranks.

But wait! That’s not all! With the Blessing of the Gods event coming to a close, and the daily quest system still a future promise, the Gods Unchained team added $GODS tokens into the reward pool for the Ranked Weekend event! Unlike Core packs, distribution of tokens needs to be considered a bit more carefully. Any easy to reach rewards with immediate monetary value will certainly attract bot farmers.

And so, the GODS token rewards are more heavily weighted towards the higher ranks and higher win levels. It works on a point/pool system. Each player receives a certain number of points based on their rank and the number of wins during Ranked Weekend. At the end, everyone’s points are totaled, and $GODS tokens are rewarded from the pool based on the percentage of the total points you have. Mythic and Ethereal Diamond players receive points even for just 1 win, while the lowest ranks need at least 20 wins to receive any GODS token pool points.

What Else Has Changed?

Matchmaking also received an update. The system prioritizes matches against the same rank player. If no match is found within 60 seconds, the search extends for one rank in each direction. No longer do players have to worry about running into Mythic players, at least until they reach Ethereal Diamond rank.

These changes kick off immediately, with the Ranked Weekend event that is already underway. So tweak your decks, plan your strategies, and play to earn with Gods Unchained!

What is Gods Unchained Ranked Weekend?

Gods Unchained is a trading card game that lives on the Ethereum blockchain. The game is free to play. Anyone can download the client and get started with the free Welcome Set and Starter decks,

Every weekend, Gods Unchained hosts an official event, where players earn rewards based on the number of wins they have out of their first 25 matches during the weekend (from Friday 4am PST – Monday 4am PST) and the rank they had before the event started. The more wins you have, the better your prizes. Because of this, the competition during the weekend is much more fierce than during the week.

Current prizes include packs from the Core set, packs from the Divine Order set, and GODS tokens. The top 10 Mythic players receive bonus packs. The game also rewards an extra Rare card pack from the latest expansion for anyone willing to grind out 30 wins during the weekend event.

Weekend prizes usually take a few days to process. Card pack prizes are delivered automatically while $GODS tokens are claimed on the Gods Unchained website. In order to receive prizes, be sure and link your crypto wallet to your account!

Do you want to start playing? Red our full Gods Unchained review.