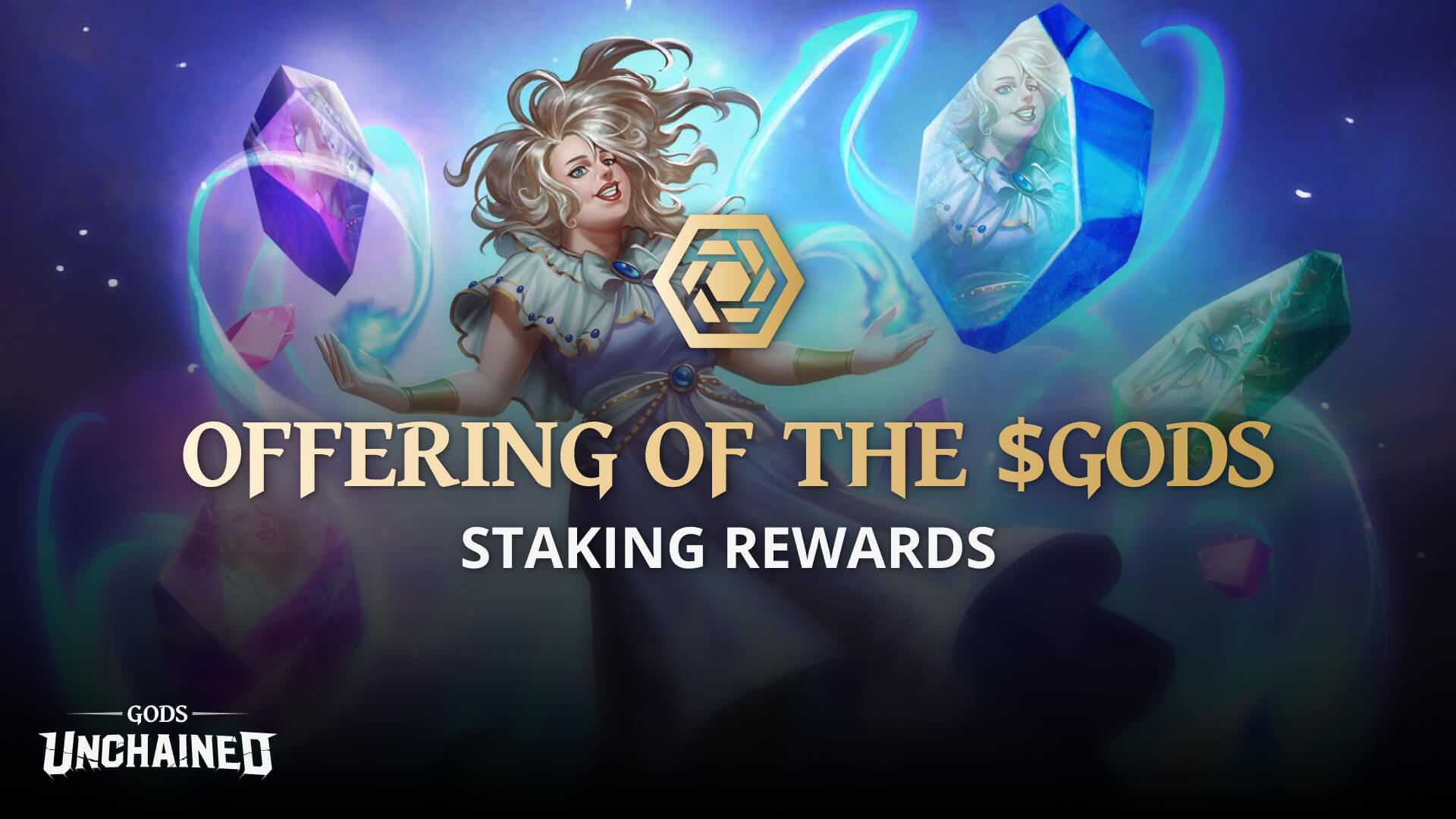 Gods Unchained adds another piece to their economic system with a new staking rewards program, called Offering of the Gods. Users who hold $GODS tokens in their Immutable X wallet, and are an active part of the Gods Unchained ecosystem, earn rewards in the form of more $GODS tokens. Participation is easy. In fact, you may already be eligible without knowing it!

Offering of the Gods is Gods Unchained’s version of a staking program for their $GODS token. But unlike most staking programs, there is no token lockup. Also, it’s not completely passive. Users do have to meet certain weekly eligibility requirements before they can earn staking rewards.

Luckily, making the list for eligibility isn’t hard at all. Barely an inconvenience! Basically, you have to hold $GODS tokens in your Immutable X wallet, the wallet must be linked to Gods Unchained, and you must have interacted with the Gods Unchained ecosystem in some fashion during the week. Ecosystem interactions include playing Gods Unchained, minting new cards in the forge, buying packs from the website, and even buying and selling cards on the marketplace!

Offering of the Gods

Snapshots are calculated on a weekly basis and began on June 13th. Rewards are delivered monthly in a batch of weekly snapshots and must be claimed from the Gods Unchained website.

The reward calculation uses the wallet’s lowest weekly token balance when calculating shares. This deters users from stacking funds for short periods to try and game the system, while also avoiding a locking mechanism that we typically see with most token staking systems.

The total token distribution will be over one million GODS tokens. However, only two-thirds of that will go towards this staking program. Gods Unchained plans to distribute the remaining tokens as a retroactive, surprise reward. The team has wallet snapshots from December 1st, 2021 through June 12, 2022. These rewards use the same eligibility criteria and calculations as the staking rewards. So, basically, the Gods Unchained team is going to pretend like they’ve had a staking program running since December of 2021, and reward users accordingly!

And though there is some grumbling from the playerbase about how these rewards were calculated without any warning, I think it’s a nice way to show some appreciation for the active community participants.

Offering of the Gods runs for a minimum of four months. It may be extended, but it was always meant as an interim program. The team hopes to develop a more permanent staking system. One that is tied into the game itself rather than an external defi feature.

Free to Play and Play to Earn

Gods Unchained is a truly free to play, play to earn game. No cost involved to start playing. No setup fees, no token transfers, no NFTs required. All a player needs is an account. After that, just download the launcher, and start playing! Gods Unchained includes a selection of free starter cards and several pre-built decks to help players begin.

Once you start playing ranked matches, you very quickly begin earning packs of Core cards. Use these to tweak your decks, move up the ranks, and play in the Weekend Ranked events. It shouldn’t be long before you’re earning Mortal Judgment packs, each of which contains five cards that can be immediately sold on the market. Players can also receive GODs tokens as rewards. Though transferring the tokens out and converting them into another currency does incur fees, players also have the option of using their GODS tokens on the Immutable X marketplace to purchase Gods Unchained cards or NFTs from other projects.

Aside from that, Gods Unchained players may also Fuse Core cards of the same type into shinier versions, which can be sold on the markets. These features, and the zero cost entry, put Gods Unchained into a very small group of blockchain games that offer true, free to play, play and earn opportunities.