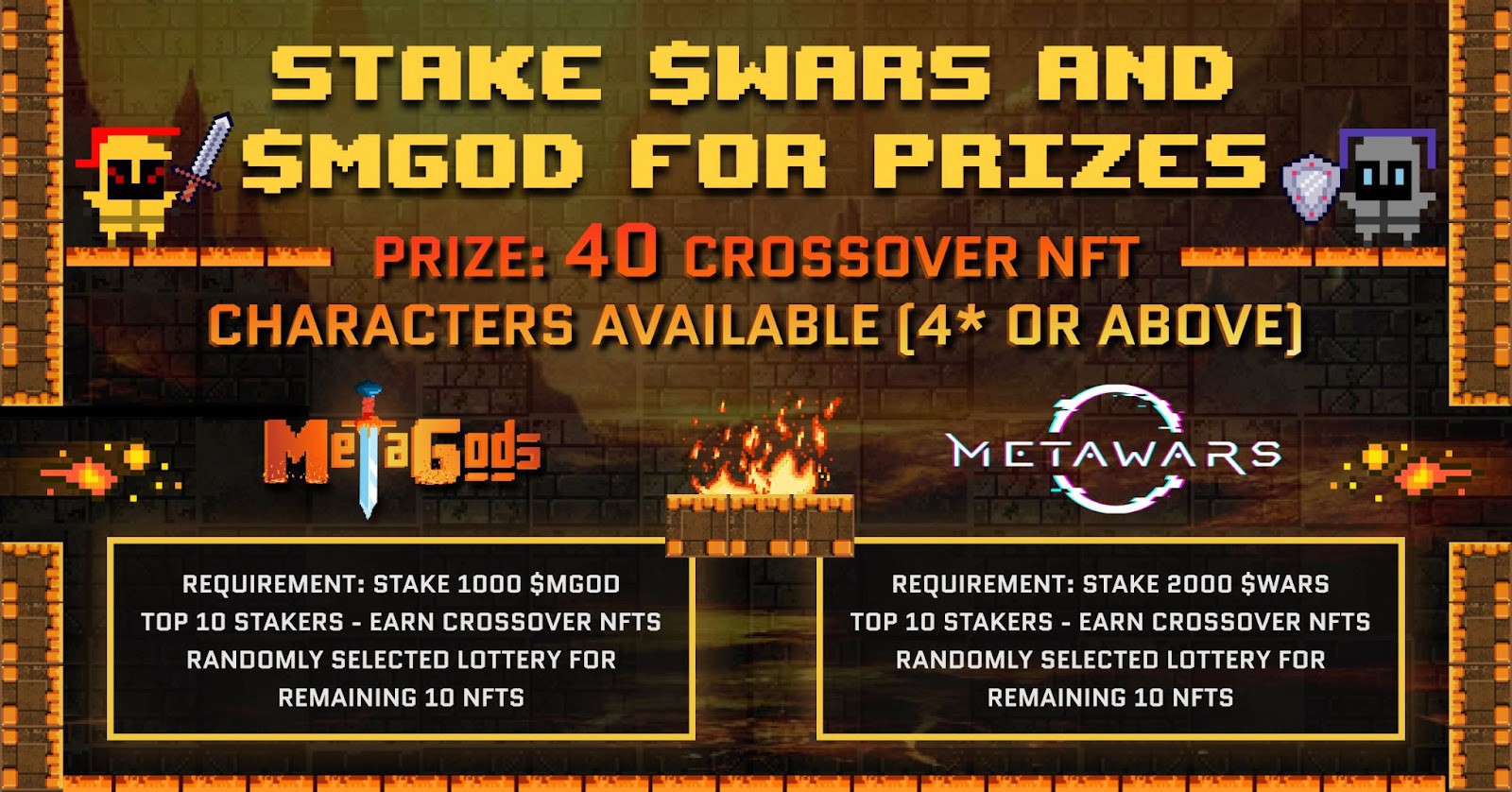 As a prelude to their game launch, MetaGods releases the first couple of pieces of their DeFi system. This features both a single stake system for the MetaGods MGOD token, and an LP pool for MGOD-BUSD tokens. Also, another upcoming staking event provides the chance to earn or win exclusive crossover MetaGods NFTs!

Following along the lines of most games on the Binance Smart Chain, MetaGods combines some decentralized finance (DeFi) with it’s gaming. In this case it involves the primary MetaGods game token, $MGOD. MetaGods users can stake MGOD into a single asset pool, or combine it with BUSD and add to the liquidity pool.

Users earn more MGOD as rewards. MGOD is available for purchase on the Pancake Swap and MEXC exchanges. Both pools require locking the tokens for 30 days. At the time this article was written, the LP pool is giving out over 200% APR! Of course, that number will decrease as more people join the pool.

On top of the regular pools, MetaGods is partnering with MetaWars for a crossover event. This event features 40 special exclusive NFT characters. Players can stake either MGOD or WARS tokens. The top 10 stakers of each receive one of the exclusive NFTs. The remaining twenty NFTs will be distributed in a lottery event among all stakers. The staking event runs from January 14th to January 20th. Stake 1000 $MGOD or 2000 $WARS to have a chance of collecting a crossover NFT character. In addition, winners of these NFTs receive early access to the MetaGods game!

Speaking of early access, owners of MetaWars Planet NFTs also get in early. Those are available for purchase at https://app.metawars.gg/planet-nft-sale . The snapshot for planet ownership is expected to happen soon!

MetaGods is a play to earn action RPG on the Binance Smart Chain. With a retro, top-down, 8-bit graphic style, MetaGods brings back some nostalgic feelings for old-school gamers.

MetaGods offers two game modes. Casual, called Atlantis, and hardcore, known as Zion. Atlantis is a staking and autoplay adventure with slower leveling and less loot. Zion is an action mode where the player tries to fight into the citadel as far as they can before they lose all their lives. Playing Zion will be limited in some manner.

The game features two token, $MGOD and $RELIC. MGOD is the external token, used for buying packs and entering tournaments. RELIC is the internal token, used for all internal transactions. In the more dangerous areas, when players fall they have a chance of dropping some of their NFT items, which can later be found by other adventurers!

Characters are currently for sale. 0.1 BNB each. Or purchase 10 at a time for 1 BNB and get an extra character for free, with at least one guaranteed three star. Character levels range from one to six stars, with more stars being higher rarity. Higher rarity means higher base attributes. Character attributes affect game play and staking. There are six base attributes: constitution, strength, dexterity, charisma, wisdom and intelligence.

Characters can also join up in groups to receive income bonuses. On the roadmap are a land sale later this year, and a town / lobby area for social interactions. Land owners can sometimes receive items from players who die while adventuring on their lands.