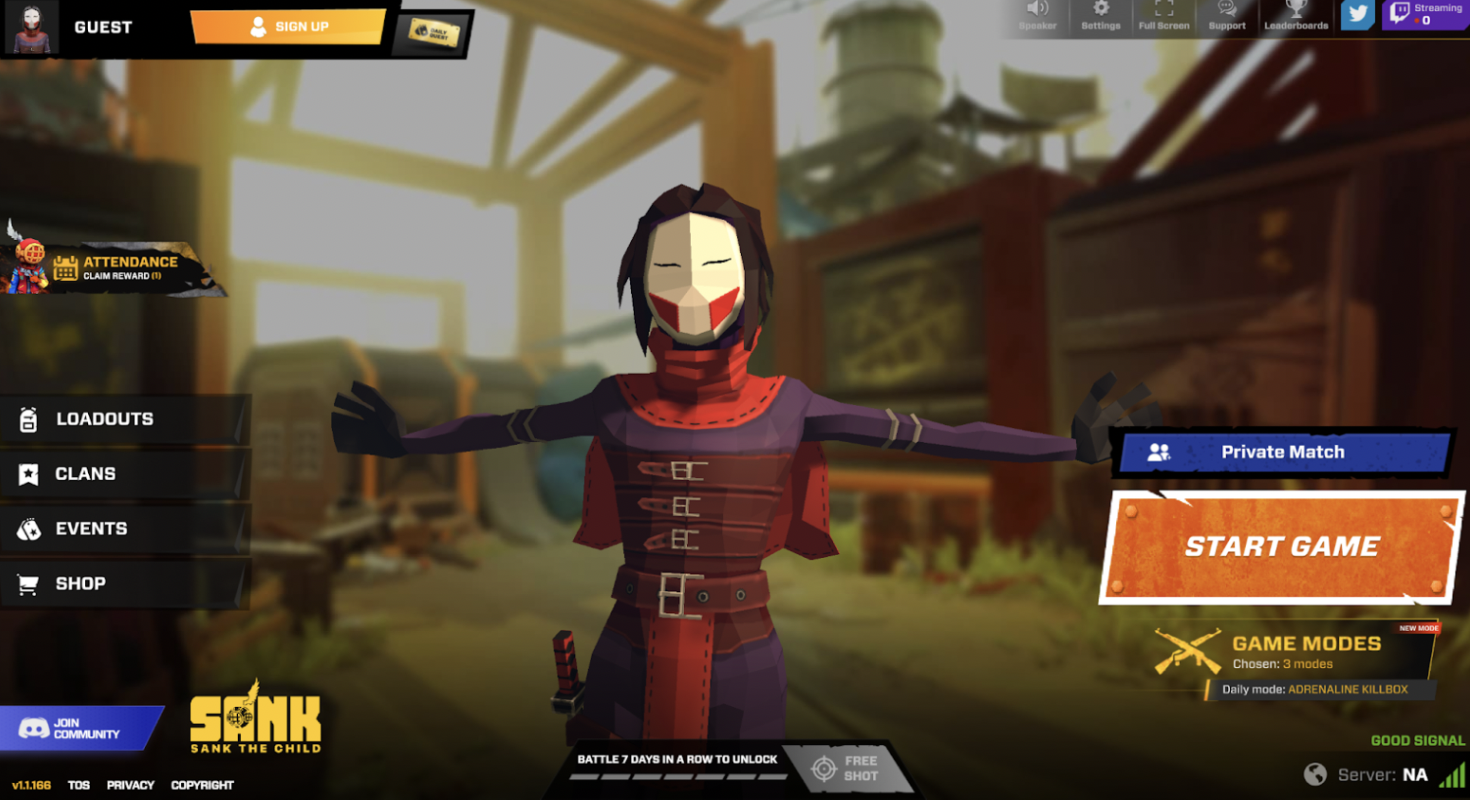 Mini Royal Nations is an in-browser first-person shooter game on the Solana blockchain.

What is Mini Royale Nations ?

In the world of traditional video games, there is one genre that stands above the rest: the First-Person Shooter (FPS). The play-to-earn community has long awaited the arrival of a worthy FPS game to the blockchain, and Mini Royale Nations seems to be just that.

Mini Royale Nations is an FPS with mechanics similar to familiar games like Counter Strike and Fortnite. Since the game is browser-based, it features blocky, low-poly graphics that reduce its resource load and allow it to be played on almost any machine.

Boasting over two million players and an average of 92,000 daily battles, Mini Royale Nations is big, and while currently most of the gameplay is one-off shooting matches, and the NFTs are mostly cosmetic, the developers have big plans for an entirely new side to the game that will bring with it a sophisticated token economy.

Mini Royale Nations is a newcomer on the scene, having launched in October of 2021.

The development studio Faraway, from co-founders Alex Paley and Dennis Zdonov is behind the game development. The studio is backed by industry-leading investment firms such as a16z, FTX, and Sequoia.

How does Mini Royale Nations work?

Mini Royale allows players to instantly jump in and find a match. You don’t even need to link your wallet or create an account! Matches last a few minutes and include game modes like:

The game features a deep emphasis on clans and alliances, so the best of the game comes out when you’re playing with friends.

Similar to other free-to-play shooters, the game features an XP system that can be used to upgrade weapons and skins, as well as a Battle Pass progression. Daily, weekly, and seasonal objectives are also a part of the game, awarding Orbs upon completion. Orbs will be one of the basic units of the game’s token economics once that is released.

The game is currently in its third season. The developers have opted for an approach of opening the game up with basic features while they build out more complex functionality in the background.

Planned future updates include a dedicated marketplace, new game modes and a Player vs. Environment (PvE) mode. The developers are also hard at work finalizing and implementing the game’s major token economy functionality.

The original game launched without any crypto integration, but in December of 2021, developers released 10,000 NFT skins featuring Viking armor in a “Premium Drop” that sold out in 30 seconds!

The NFT elements are currently cosmetic in the form of armor and weapon skins. According to the developers, future NFTs will feature some power boosts and additional perks such as faster reloading or larger weapon magazines. Notably, these perks will only apply in Player vs. Environment modes. In Player vs. Player modes, enhancements from player NFTs will remain purely cosmetic.

The current NFTs can be earned by progressing through the Battle Pass or by purchasing them from a marketplace like Magic Eden. Mini Royale also allows players to rent NFTs and the developers award exclusive NFTs to the top 25 players each season.

The exciting future NFT use-case for Mini Royale is the addition of Land. Plots of Mini Royale Land will be sold as NFTs and will correspond in size to cities in the real world, such as London or New York, with more Land representing bigger cities.

NFT Land forms the cornerstone of the anticipated token economics features of the game. Players can use Land to build different types of buildings. Buildings add additional functionality to the game, allowing players to upgrade their weapons and armor, earn new items, and refine Orbs earned from playing matches into Enriched Orbs used for highly competitive Clan Tournaments.

What’s more: Land is not purely private. This means that players who own Land will be able to rent out their Land to other players who may not have Land of their own. Landowners will get to charge a fee for the use of the buildings on their Land. This functionality will allow players to earn from Mini Royale without ever setting foot into a shooting match.

Land is also rivalrous. Just because you bought a plot of Land doesn’t mean it’s yours forever. Hostile players can launch a raid to take over your Land at any point, so you have to be vigilant. Land plots are defended by staking weapons and by constructing defensive buildings. The better weapons a plot of Land has staked to it, the harder it is to take it from you.

Land is a single NFT that can be purchased, but the buildings required to utilize and defend your Land have to be built by spending the $CHEDDAR and $ROYALE tokens. These are two upcoming cryptocurrency tokens for Mini Royale Nations.

This is the Mini Royale utility token, and $ROYALE is the governance token used to make decisions about the future of the game. Both are also used as payment to construct buildings on plots of Land. Fortunately, each of these tokens can be earned in-game through winning Clan Tournaments and by charging other players for using your buildings.

This is a token of a predetermined, finite supply. As such, it will be available for purchase on decentralized exchanges (DEXs) in the open market, like any other cryptocurrency. Players will be able to stake their $ROYALE to earn more of the token.

In contrast, the $CHEDDAR token will only be awarded as a result of in-game play. $CHEDDAR does not have a finite supply, so it will always be available as a reward, regardless of how many other players also own the token.

$CHEDDAR and $ROYALE can also be used to speed up almost every process that normally takes time in the game. Examples include the construction, upgrade, or repair of buildings and the exploration of Land.

Here is a brief overview of the different types of buildings that $CHEDDAR and $ROYALE tokens can be spent on:

It’s important to note that none of this functionality is in the game yet, but it is outlined in the Whitepaper and planned for release very soon. According to the developers, the Token Economics piece will be launched “In the first part of 2022”.

Mini Royale Nations is free to play. The developers place a strong emphasis on allowing everything to be earned in-game, so very few of the game’s NFTs are available exclusively through purchase.

How to play Mini Royale Nations

Mini Royale Nations is a browser-based game. The website gives players the opportunity to log in, choose their loadouts and skins, and decide the match type they want to play. Once the game loads, players spawn in a low-poly shooting map. New players can choose from several default characters. More characters are unlocked through playing the game and can also be purchased as NFTs

Players can choose between Ranked and Unranked gameplay. The Ranked option provides players with an opportunity to earn more XP per game, while Unranked play does not penalize the player for losing. Players can still earn XP and Battle Pass points in Unranked.

How to get ahead in the game

Completing the mission objectives earns players Orbs, which will be upgradeable to Enriched Orbs in the future. Receive Orbs by completing daily tasks and upgrading your Battle Pass level.

Enriched Orbs are necessary to enter the upcoming Clan Tournaments in the future, where you can earn $CHEDDAR and high-level gear. The upcoming additions of Land and the $ROYALE token will add additional elements of economic strategy.

Tools used in the game

Upon starting, players can choose from a set of loadouts with different weapons — short range or long range — based on personal playing style. Earn the most kills or complete the objective first in each game to win.

How to install Mini Royale Nations

Step 1: As the game is browser-based, accessing it requires no installation.

Step 2: To play Mini Royale, all you have to do is navigate to https://miniroyale.io/ and

How to earn money on Mini Royale Nations

Currently, Mini Royale players can earn money by trading NFT weapon skins and armor. In the future, with the introduction of Land plots and Clan Tournaments, players will be able to earn $CHEDDAR and $ROYALE tokens by managing and defending their Land and through winning Clan Tournaments.

While you can connect your wallet, getting started with Mini Royale Nations is as simple as navigating to their website and jumping in. You don’t even need to create an account. Do note that if you don’t use an account, none of the XP or Orbs that you earn will be saved.

As one of the first multiplayer games on the Solana blockchain, Mini Royale can be played as a grind for profit or just for casual fun with friends. Creating Clan alliances now will bear fruit in the future when Land is released, and you need the help of your Clan to defend your Land and take that of other players.

While most blockchain games require an initial investment to get started (usually in the form of buying a character or other NFT), Mini Royale is completely free to play, and the developers are committed to keeping NFT upgrades purely cosmetic in PvP multiplayer — so you’ll never have to buy an NFT to win.

Not yet fully ready

As it stands, the game is currently a basic in-browser shooter. The Land and Clan updates planned for the future are set to catapult Mini Royale to the ranks of the most dynamic play-to-earn games, but for right now, the gameplay is pretty unimpressive.

Maps are small and frustrating

The game only features a few different maps, and most of them are quite small. For 5 vs. 5 play, this means that the map is constantly crowded, spawn camping is common, and, unless you’re coordinating with your team, solo strategy is rarely more than “point and shoot as soon as possible.”

For fans of vanilla shooters like Counter Strike, Mini Royale will feel like home. Everyone else who is used to games with more dynamic elements will be left disappointed by the barebones gameplay. This is not to say that the game doesn’t require skill, though.

Step 1: Getting started with Mini Royale is as simple as opening the game in a standard laptop or desktop web browser by going to https://miniroyale.io/. Step 2: You can dive right in without creating an account, but your progress will not be saved. How do you get Mini Royale?

Navigate to https://miniroyale.io/ to get started.

What is the Mini Royale NFT?

Mini Royale currently offers weapon skins and armor as NFTs, with plans to add NFT Land and crypto tokens in the future.