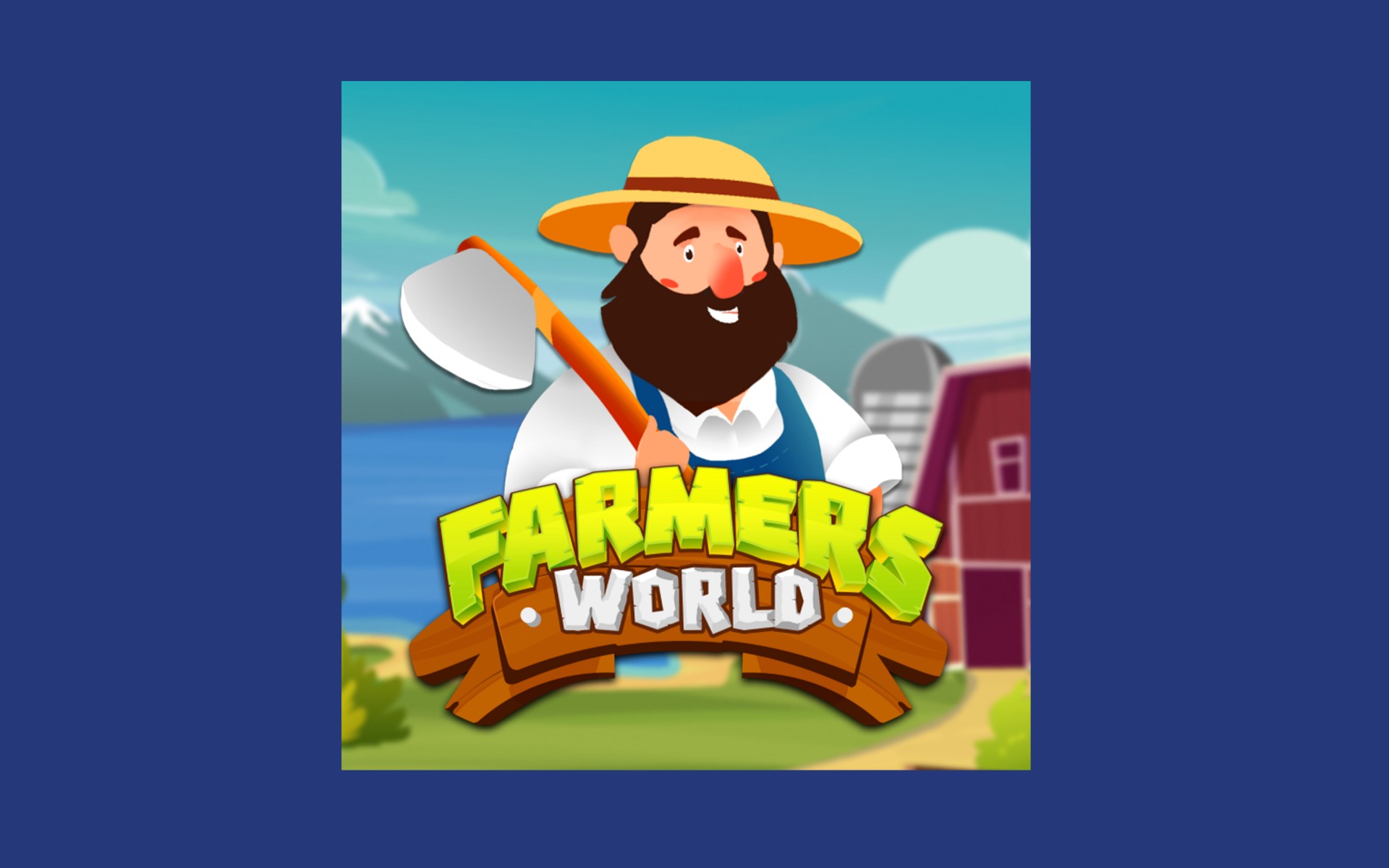 Farmers World is one of the largest NFT games communities, having gained popularity in the crypto space. They have a vibrant online community with over 150,000 players and over 80,000 discord members.

What is Farmers World?

Farmers World is a decentralized NFT game operating on the WAX blockchain. It is built on the premise of Game-Fi and NFTs. Players engage in different farming activities, interact with other farmers, discover many resources, purchase tools, and buy land. You can farm gold, and NFTs make money from this game and exchange the tokens you earn for WAXP. You can also build equipment to make NFTs that you can sell to other players.

Each element of the game is unique and has its own specific function in the game.

To play this game, participants must:

The farmer is the main character in the game. Some of the additional characters include:

Players can earn by selling animals and food and mining tokens in the marketplace. They can easily exchange resources like barley and milk from the animals.

The game was developed in Japan by G.JIT JAPAN, a Japanese game company.

Farmers World made some appearances in July but launched officially on the 1st  of August, 2021.

The game was inspired by a documentary called manuscript №4848, which is popularly stored in the National Library of Brazil. The documentary describes the details of ancient farming in Brazil.

The developers of the game intended to provide something spontaneous and fierce. An unusual kind of game that will hook thousands of players.

Since the game’s launch, it has recorded some good progress. This progress includes:

They’ve worked with more than ten major global investment companies and partnered with people with similar visions for the evolution of the Farmers World.

How does Farmers World work?

Farmers World is an easy game to learn. Once you have your WAX wallet connected, you’re eligible to start playing. You can get tools through the WAX NFT marketplace or create tools using NFT game cards.

While waiting for your harvest, you can visit other farms and compete for resources with other players. These activities fetch valuable rewards for players.

Now, the game has three in-game tokens; wood, food, and gold. They each have their uses. Food is an energy renewer for farm guards who will battle against invading monsters.

You must be cautious about defending your farm from intruders because you’re also passively mining tokens.

You can mine gold and NFTs and earn money in the marketplace by mining and playing the game.

The NFTs in Farmers World are used in the game. Players use these NFT tools to get the three major resources, buy NFT land plots to cultivate crops, and raise NFT animals.

The NFTs in Farmers World are:

Additionally, the developers added new features to the game. Players will need their own NFT to use the new features.

The membership levels are:

The benefits you receive depend on the type of membership card you use.

All the NFTs (tools) the players generate will be stored in a chest, and players can sell the NFTs on the secondary market for WAX.

There are tokens in the game. They’re called resource tokens.

The Farmers World token is listed on Binance, Coinmarketcap, and Alcor exchange. Using the Alcor exchange system, you can purchase FWW, FWF, and FWG tokens.

Players can earn tokens by participating in in-game activities. Players can also use it to pay for NFTs items in the game.

Although Farmers World has already launched its token, players will still need the WAX token to play Farmers World.

Farmer world is currently priced at $0.000010 and could go up depending on the game’s future additions.

How to play Farmers World

The game world is set in a Farmland at an infancy stage. The players grow crops, harvest them, and tend to the livestock. The game characters include:

For the game mechanics, gold, wood, and food are game tokens that players can mine and either use to play the game or sell for a profit.

To begin, players must purchase tools on the market or use the game tokens to create their own tools.

Players will also need a fishing rod, net, and boat to take advantage of Food coins. To harness Wood coins, use an Axe, a saw, or a chainsaw. You can buy any exploitation tool with Wood Coin. The extraction of gold coins requires a mining machine. You can repair the necessary instruments with Gold. New equipment can also be bought using gold coins.

Every piece of equipment used in mining must be equipped. For example, players must first equip a fishing rod before using it.

If you want to mine continuously, you must wait until the countdown has finished before beginning the subsequent mining operation. Each tool has a countdown of one hour to cool after it has been used to mine resources.

From the confirmed mining procedure, you will immediately earn FWF, an in-game currency from the mining procedure. The strength index starts to fall as a countdown clock begins to run.

As you proceed with the extraction, your player’s health starts deteriorating, and that’s where the Food Coin is needed to replenish your player’s health. In addition, you’ll need at least one Farm Plot to cultivate crops, a cowshed, and a Coop for chickens.

You need to water the plants when growing crops; this requires Energy. So you’ll get 200 Energy, which has to be refilled to complete your tasks. Tending livestock and developing crops is part of the game. The baby calves need to feed on Milk. Calves, dairy cows, chicks, and chickens need to consume barley. There is a countdown interval between animal feeding.

The NFT cards of baby animals are destroyed and minted into the next level as they grow older.

The tools used in the game include: Your profits from exploitations vary, depending on the sophistication of the working tools. You can purchase these tools on Atomichub.

How to install Farmers World

For now, the game developers are still working on the application so players can access the game from the device. So You can’t play it on Mobile yet. However, you can start playing on your computer by visiting the website at https://farmersworld.io.

How to earn money on Farmers World

Before playing Farmers World, you need to make some initial payment.

If you’re looking at a starting capital of 500USD, That will get you one Stone Axe, and the rest of the money will be for staking in Wax Cloud Wallet.

You’ll need around $2,000 to start in the gold mining section.

Mining Excavators in-game can cost as much as 4,700 WAX on AtomicHub’s marketplace. It is advised to begin by purchasing Wood, Food, and Farm plots because they don’t demand as much money upfront unless you feel comfortable investing several thousand dollars into the game at once.

Once you’ve made your capital available, you can earn money through the following means:

Players can sell them at Alcor Exchange for WAX after withdrawing them to your wallet. In addition, Wax can be sent to websites like Binance to be exchanged for USDT, other cryptocurrencies, or your local currency, and you can then withdraw the proceeds to your bank account.

There are no scholarships available for Farmers World.

Pros and cons of Farmers World

Here are some of the potential pros and cons of Farmers World.

This game is a good way to increase your income since it has great potential. Players can participate in the De-Fi market to earn more profit.

Unlike centralized games, Farmers World isn’t owned by a single authority or controlled from a central location, although we know a Japanese company created the game.

All items and experiences obtained are transferable and can be reused in another game because the game is built on blockchain technology.

To begin your journey in Farmers World, you’ll need a starting capital of about 500 dollars to purchase a stone axe and stake some on a WAX cloud wallet. For instance, you need to own a mining excavator, which costs tons of dollars to mine gold.

Some members of the Farmers World community have raised some concerns. There’s been no communication or update since May. The team behind this project usually gave a monthly report. But since February, there’s been no such update.

The prices of some of the resources used in the game have fallen. As a result, the community is attempting to burn large quantities daily.

How to get started

Getting started on Farmers World is pretty straightforward. Step 3: Purchase an Axe and a fishing rod to start playing. Step 4: Now, visit play.farmersworld.io, click the login button, and log in with your WAX wallet or Anchor.

Step 5: Once you log in, click the green “Play & Earn” button. It will then take you to the game. You can begin playing once you’ve logged in and prepared your accounts.

You can also use your WAX account to sell on the secondary market. *Note: Gas fees are necessary to power all blockchain transactions, so they are charged when you trade in-game currency for resources or create NFTs.

Can I play Farmers World on mobile?

For now, Farmers World isn’t yet available to play on Mobile phones. However, the developers are working on the application for Android and iOS.

What blockchain does Farmers World use?

What is the Farmers World token price?