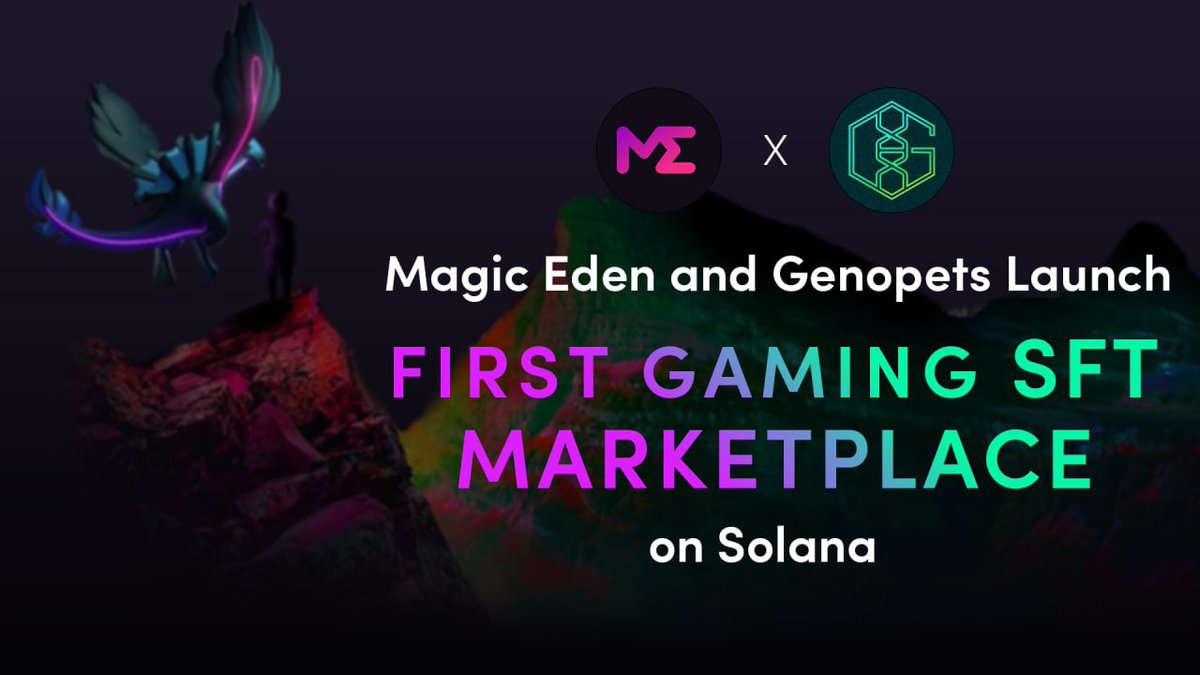 Genopets announced a new partnership with Magic Eden, bringing a new type of asset, Semi-Fungible Tokens (or SFTs), to their marketplace. SFTs allow for NFTs to be stacked for ease of trading. This is an interesting development in the world of NFTs, and one that could ripple out to the wider blockchain gaming ecosystem.

Resources in blockchain games are generally kept in game, or converted into token form. Which sometimes doesn’t make a while lot of sense from a gameplay standpoint. For example, when making a fire, 10 small pieces of wood = 1 full piece of wood can work. However, that isn’t the same when you’re trying to build a house! So, instead of blocking game resources from the blockchain or implementing yet another token, Genopets introduces SFTs.

In short, SFTs are stackable NFTs. They are still individual items, but since they are not unique, their metadata allows them to stacked together as a group. This results in cheaper fees when minting or purchasing multiple items. Also, this avoids the partial resource problem, as you can still only buy, sell, and trade them in whole unit quantities

The first SFTs for Genopets will be Terraform Seeds and Refined Genotype Crystals. As prime resources for crafting and leveling up Habitats and Genopets, these items will see lots of trading activity. So it makes sense to work on making trading these NFTs more convenient and efficient.

Players who have already existing NFTs for these items, can convert them into SFTs at https://mainframe.genopets.me/inventory

These SFTs are already available on the Magic Eden marketplace. The interface is slick, easy to use, and makes mass purchasing a simple, single transaction.

SFTs are an interesting addition to the blockchain gaming space, and not something that I have see (yet) on other blockchains. Though it may not seem like a big deal to a casual passerby, this is a pretty big game changer. SFTs allow game developers to push game resources onto the blockchain in NFT form, but with some features more commonly associated with tokens. I expect this standard to spread to other chains, and I look forward to seeing which games on Solana are the next to take advantage of this new tech feature.

Genopets is a free-to-play, “move to earn” game built on the Solana blockchain. Genopets uses data tracked by a smartphone or fitness wearable to level up a Genopet NFT. Players summon their pet and quest in the Genoverse exploring hidden lands, finding loot, crafting items, and battling with other players. Genopets features two tokens, GENE and KI.

In this move to earn game, players earn XP from walking. They convert that XP into KI tokens using Habitats. Then, use the KI token to craft Crystals, improve their Genopet, and walk some more!

Players can earn via cashing out their KI tokens, crafting and selling Crystals, or renting out Habitats. Habitats are NFTs and the main gateway into play to earn. Each Habitat holds one Genopet. Habitats generate Crystals and KI tokens passively, while also increasing the experience your Genopet earns. All crafting is done at a Habitat. Players must maintain their Habitats or production stops.

The GENE token exists on both Solana and Binance blockchains. Genopets is currently in private beta and adding new players on a regular basis. They opened up a staking program for their GENE token not long ago, and held an airdrop and sale for their KI tokens. Coming soon, Habitat Upgrades