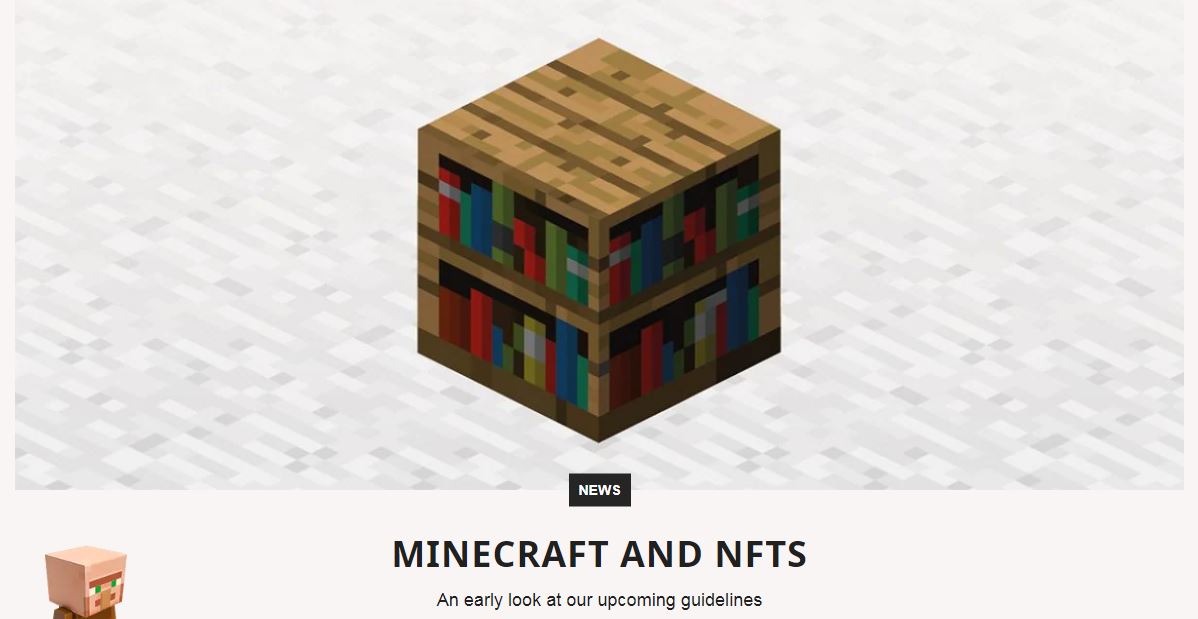 Mojang Studios, developers of the ultra-popular Minecraft, dropped a big announcement today. One that affects a number of blockchain gaming projects. In short, Mojang says that integrating Minecraft with NFTs or blockchain in any manner is not allowed. At all! This is a huge body blow for blockchain gaming. And especially for NFT Worlds, built as it is with Minecraft as the foundational game.

The official blog post from Mojang talks about protecting their customers and making sure that Minecraft content is available for all users, rather than gated with NFTs. And even though they find charging money for server access acceptable, apparently using NFTs is not.

And when you actually get down to it, I can understand the desire to keep others from monetizing your content without your permission, but this feels like a knee-jerk reaction. Which I guess is not surprising considering the amount of negative info spread among the wider population in regards to NFTs. And the media attention that comes with every scam or rugpull. And since Mojang Studios is now owned by Microsoft, this is not an especially strange reaction from a large corporation. Nonetheless, it hurts the community as a whole.

You can read their official post here, though the quote below sums up the main idea.

blockchain technologies are not permitted to be integrated inside our Minecraft client and server applications nor may they be utilized to create NFTs associated with any in-game content, including worlds, skins, persona items, or other mods.

NFT Worlds and all of its associated projects took a nosedive in value as owners panic sold their assets. Over 300 NFT Worlds were sold today, with the floor price dropping to 0.75 ETH. The value for NFT Worlds token dropped by 50% in just a few hours. All of the NFTs for projects built on top of NFT Worlds are following suit. At the very least, these projects probably go on immediate hiatus. Most likely, many of them will never rise again.

I believe the NFT Worlds team will find a way to pivot if needed. But doing so will likely set them back by quite a bit. And they may never be able to recover their lost status. A lot of the projects building on top of NFT Worlds probably won’t be able to wait it out.

Here is text from the first reaction announcement from NFT Worlds.

First of all, we are as blindsided as you are. We have talked with Minecraft’s IP department multiple times in the past. They have never clearly indicated that anything we were doing was going to be ruled on/restricted (other than existing EULA items, which we complied with for the entirety of the project, such as our stance on advertising/IP within the game).

I know this is extreme cause for concern in the community, and it is for us too. But we’re currently considered all options, and will do our best to figure out another option going forward, even if thats a pivot.

A few things we need to do, so we can figure out where we stand:

– Contact our existing contacts at Microsoft, and get a clearer definition of the true standards/guidelines will be enforced.
– Figure out how to pivot our model in order to comply, since we still have an extremely powerful vision and set of Gamefi technologies.

In the event that we do have to change the NFT Worlds product, we will do our best to do so. Pivoting startups into new models/products to adapt to market conditions is something we’re very familiar with, so that part doesn’t worry us at all.

Whatever happens, the holders that supported us will be included in the new NFT Worlds to come

(Note: In a more recent announcement, NFT Worlds says that their tech can be easily transferred to other projects and that several have already reached out to them for potential partnerships!)

However, like Steam’s ban on blockchain games, the end result will be that the gaming developers find other, more accepting platforms for their creations. In some cases, leaving the doubters behind, though as one of the most popular games to ever exist, I doubt that Minecraft is going anywhere soon.

As someone interested in blockchain gaming and the tech behind it, I hope that NFT Worlds and many of the other projects find their way to continue on, but I don’t doubt it will be a rough road ahead for some time.