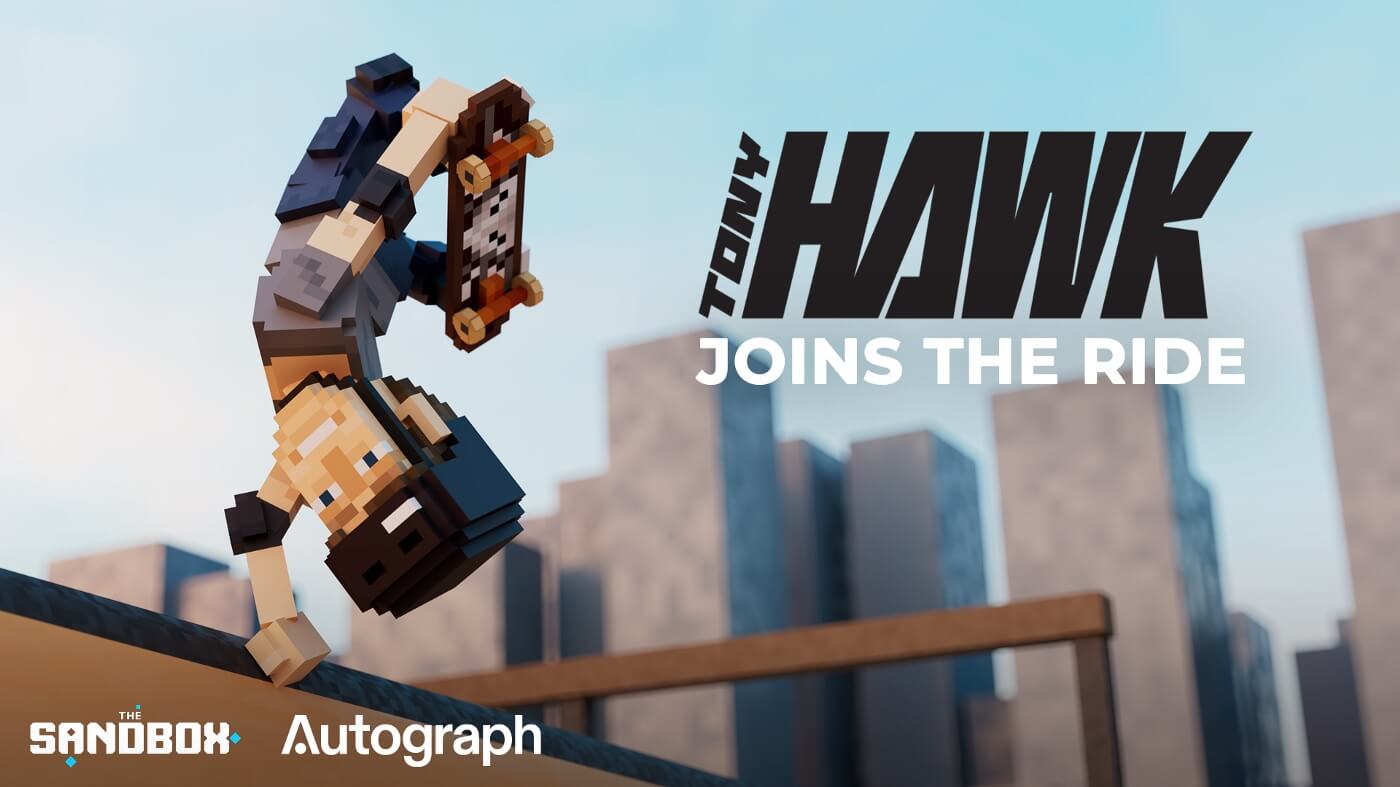 Tony Hawk, the legendary American professional skateboarder, has announced a new partnership with The Sandbox to build the biggest virtual skatepark of the metaverse. As per The Sandbox blog, Tony Hawk and NFT solution platform Autograph are planning to launch an NFT collection and an experience in The Sandbox called “Tony Hawk Land.” The land will allow players to create their skateparks, use their NFTs and participate in contests. The news dropped after the announcement of the cancellation of the Tony Hawk Pro Skater 3 & 4 sequel.

The Sandbox continues to announce high-profile partnerships. After The Smurfs, Ubisoft, Binance, WMG, Adidas, Atari, and Cryptokitties just to name a few, they are now partnering with skateboarding legend Tony Hawk.

The creation of Tony Hawk’s Land aims to promote skateboard culture globally. The virtual landscape of the Sandbox will attract the skateboarding community who can try out this exciting digital world where they can ride on their customized skateboards. The Tony Hawk Land will include 36 plots of land, making it the biggest skatepark of the metaverse.

It will allow players to create their custom skateparks giving users creative freedom. Players can use the Game Maker software to build the skateparks and import them to the metaverse, after which they will be able to skate with other players. The experience will also have its own marketplace where you can buy and sell NFT of skateboards and custom apparel.

“I have been a fan of new technology all my life – from the first videogames and home computers with CGI capabilities – so I am fascinated by the metaverse and excited to bring our culture into the virtual landscape of The Sandbox.”

Autograph, an NFT platform that connects legendary people from the sports world with blockchain platforms, will help create Tony Hawk NFTs for his land on The Sandbox. These NFTs can be iconic skateboards, equipment, accessories, and apparel resembling that of Hawks. There will be a legendary skateboard NFT that Tony Hawks used at the X Games in 1999. At this event, he became the world’s first skateboarder to land a 900 on a vert ramp. These high-fidelity NFTs will be turned into 3D voxel avatars with in-game functionality for owners. The interoperable NFTs can be used outside The Sandbox metaverse, adding more utility.

“At Autograph, we strive to build otherwise impossible experiences for communities of fans, and this is a step towards our goal of connecting them uniquely and at scale to Tony Hawk and each other.”

This partnership news came after Hawk’s claimed that a planned remake of Tony Hawk’s Pro Skater 3 and 4 was canceled after Activision Blizzard decided to merge Vicarious Visions with Blizzard. Tony Hawk made this remark during a chat with Twitch Streamer AndyTHPS. Vicarious Visions released Tony Hawk’s Pro Skater 1 + 2 in June 2020, which received critical acclaim from fans. In 1999 he first released the popular “Tony Hawk Pro Skater” game series that sold over 1 million copies in 10 days. Through digital means, Tony has tried to promote skateboarding culture among people for years.