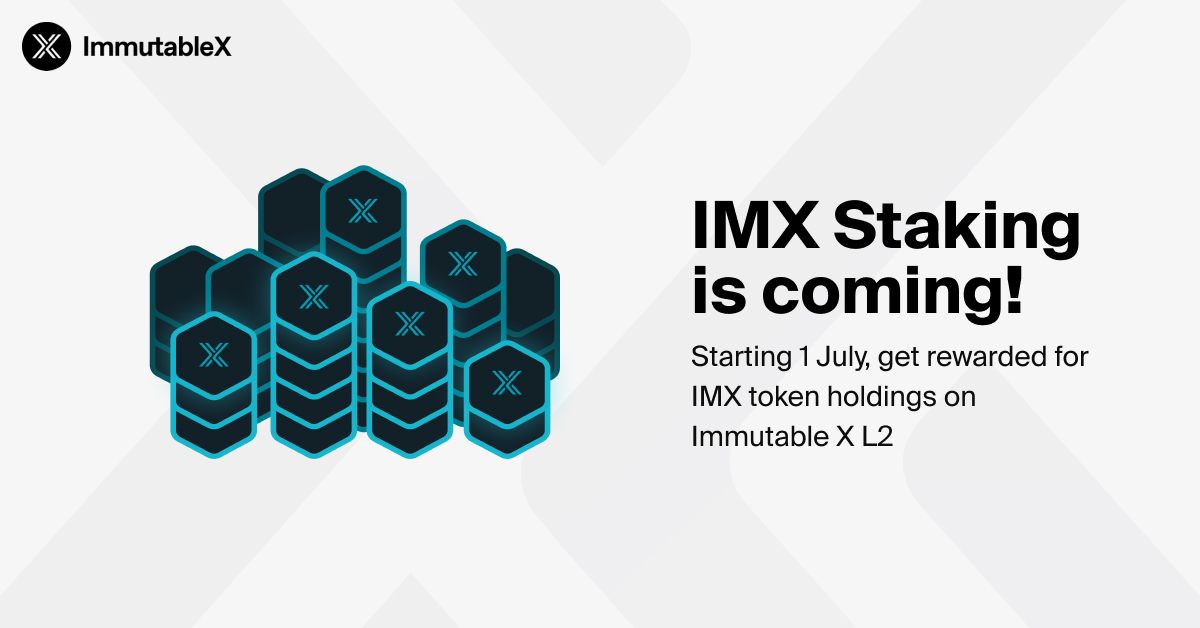 After recently announcing an airdrop of IMX tokens to active traders on their platform, Immutable X follows that up with a new token staking program. This program offers rewards to those who trade on their marketplace and also hold IMX tokens on Immutable X. The window for this first staking period closes on July 8th!

Immutable X has grown from an offshoot of Gods Unchained into a major player in both NFT marketplaces and layer 2 solutions. They first released their IMX token last year. Since then. they have implemented IMX as a payment option in their marketplace and added IMX protocol fees for transactions. A percentage of those protocol fees were earmarked as a rewards pool for IMX staking. And now, that staking program is ready to begin!

Those who keep their IMX tokens on the Immutable X platform, are automatically considered part of the staking program. At least for the moment. There will be a more formal dashboard in the future that requires interaction. But, for now, all you have to do is hold at least 10 IMX tokens in your Immutable X wallet, and make at least one trade on the Immutable X marketplace in the month of July. The deposit period was recently extended. Users now have until July 8th, 0:00 UTC, to move their tokens to IMX and be counted for this initial staking period. Tokens in external wallets do not count!

IMX rewards are distributed based on your minimum token holdings during the staking period. So don’t try to game the system by moving tokens in and out. Put tokens you want to stake into your IMX wallet and leave them there!

It doesn’t matter what NFT you trade. You only need one. And both buys and sells count. If you’re not already active on Immutable X, some Gods Unchained cards cost just pennies!

This first staking cycle runs until the end of July (July 30th, 0:00 UTC). You can check your current staking eligibility at this link (use the in-page search feature and look for ONLY the last four characters of your linked ETH wallet).

Rewards for staking are generated from the protocol fees collected from the marketplace. Twenty percent (20%) of these fees go into the staking rewards pool. And since the fee collection started at the beginning of June, this first cycle includes all fees collected since June 2nd!

What is Immutable X ?

Immutable X is an Ethereum layer 2 scaling solution for NFTs. Developed as an offshoot from Gods Unchained, when the team realized that high gas fees were a major hindrance to card trading, Immutable X has grown quickly. Over the past year, Immutable X has managed to attract a growing array of projects to its platform. Some notable names include Gods Unchained, Guild of Guardians, Illuvium, and Ember Sword. But it’s not just for gaming NFTs. Immutable X also hosts dozens of other NFT projects.

The platform went live in 2021 and launched its token later that year. There are no gas fees when trading on IMX. However, there are ‘protocol’ fees of 1% (increasing to 2% in July) on every trade and sometimes market fees as well. And though the platform supports holding multiple tokens, ETH, IMX, GODS, and GOG, most sales are in ETH. Also, if you want to remove or add funds to your IMX account, then you have to pay Ethereum gas fees for the transfer.

Immutable X is growing quickly and developing more name recognition. Illuvium minted the NFTs from their recent land sale directly onto the platform. And Ember Sword is in the process of encouraging their land owners to migrate over as well. With their recent partnership with Gamestop, Immutable X could find themselves on the forefront of mass adoption for blockchain gaming!