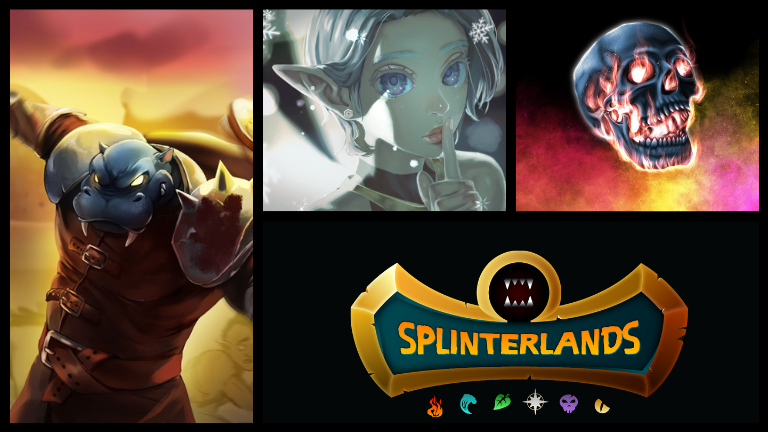 Splinterlands has teased us for a while with the idea of two separate leagues. One that includes all the cards, like it is now. And one that just includes more recent cards, as those are generally more accessible to new players. Well now they are here to tease us further with details on how the new formats will work, but no official release date!

Splinterlands has long wanted to break their league rankings into two groups. One, called Wild, would be the free for all it is now. All cards from all sets are usable. But the new league, called Modern, will be limited to only the two most recent sets.Currently, those are Chaos Legion and Untamed. Some Promo and Reward cards are also associated with specific sets. You can tell by checking the card border.

With the splitting of the leagues like this, it seems like most players will tend to gravitate towards one league rather than try to play both. Attempting to maintain a consistent ranking from season to season will require twice as much work if you’re doing it on both Modern and Wild formats! This update could also trigger another major shift in the Splinterlands economy.

Unfortunately, we don’t have a specific date for the launch of the split league feature.

So here’s how it will work. Players can play in either or both leagues. The collection power requirements for both leagues still use the player’s total collection power (i.e., it isn’t broken down by card set). There will be a separate DEC reward pool for each format. Meaning that sometimes it may be worth more DEC per win to play in one league versus the other.

Each league also maintains its own leaderboards, with separate prizes for the top finishers. So a player could potentially earn leaderboard prizes from both formats. Brawls will remain Wild format for the moment, though Modern Brawl options may be added in the future. Tournament makers can choose Wild or Modern format when creating a new tournament.

There will not be separate energy bars. Players’ energy drains from the same bar, whether they play Modern or Wild. Focus Points from both leagues contribute towards your daily and seasonal reward chests. The rating reset a the end of each season remains the same. Player’s lose rating in both formats and will have to work their way back up the rankings again.

The tier for Reward Chests from Season rewards will be based on the highest rank achieved in either league. Daily Chest tiers are based on the current best rank between both leagues. In order to earn Reward Points, players must be of at least Bronze III rank in the league they are playing.

Once the new Formats go into effect, everyone’s Modern and Wild ratings will be automatically set to the current rating. All existing tournaments will be considered Wild and will be marked as such.

For those who link into the Splinterlands APIs, you will probably want to read up on how these changes will affect you.

Splinterlands is a play-to-earn, trading card game that started on the Steem blockchain as Steemmonsters. However, over time the project changed its name and switched to using the Hive blockchain. The game plays in a browser. Thanks to cross-chain functionality, cards and tokens can also be traded on the Ethereum blockchain and on Wax. Splinterlands now also has a governance token, called SPS.

Splinterlands is a cross between a deck-building game and an auto-battler. Players use their cards to create a combat lineup based on the rules of the match. Then, once both sides submit their teams, the cards battle it out until only one team remains. Players earn Dark Energy Crystals when winning matches, and can also earn additional cards and other rewards through Daily Quests, Seasonal rewards and a recurring, two-week leaderboard contest.