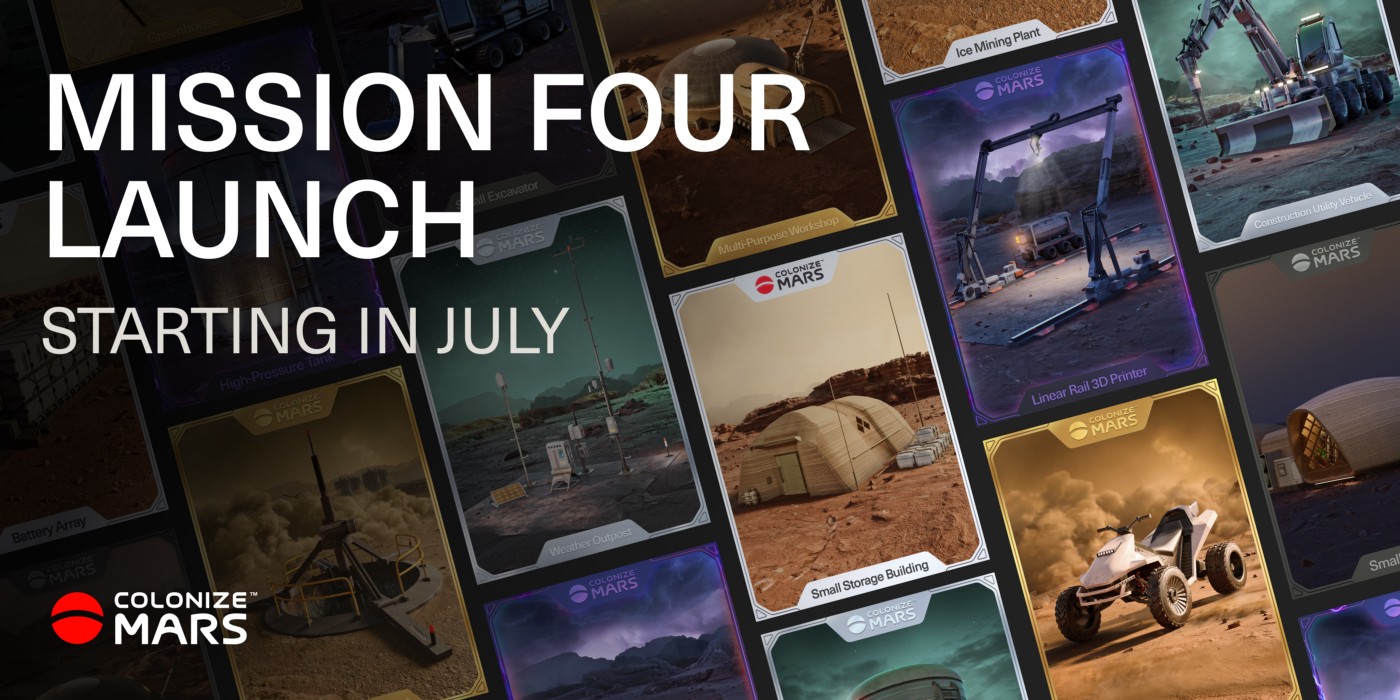 In the Spring of 2022, Colonize Mars introduced new staking pools to their game. These pools allowed players to stake Martia tokens and receive some of the basic resources for the Mars colony. Since then, these pools have expanded to generate no less than sixteen different resources! But that system will be thrown out in July with a new economy. In addition, we’ll see sales for Mission Four NFTs open in July as well, with players purchasing cards from NFT pools.

Though it began as an idle clicking and staking game, Colonize Mars is ready to elevate its Mars settlement building game project to a new level. With complex, interconnected production chains, a gamified, cooperative building simulation, and new NFT pools that hold cards for purchase, the world of Mars will see some major shakeups and force players to adjust the way they play the game.

The passive staking system was always meant to be temporary. And Colonize Mars is just about ready to implement a full-on production chain. Every NFT will have its own production values and a cost associated with producing the resources. For example, an Ice Mining Rig uses Power and produces Water. While Civil Engineers need Water, well-being, Food, and Oxygen in exchange for producing Construction Materials and Engineer Labor.

As long as your NFTs have their needs met, every hour, they produce resources and Martia tokens for you. Resource production is also affected by the health of the NFTs. If a card is “damaged” due to a hazard event, then its output will be reduced by an equivalent percentage. These rewards are all in shared pools. So those pools with more participants will see less payout per player. Card rarity affects your pool share as well.

This change brings a real economy to Colonize Mars and forces players to find complementary cards in order to make best use of their NFTs. It actually requires some strategy instead of just dumping everything into staking and collecting tokens every once in a while, which is a nice change. Also, all Colonize Mars resources exist as tokens on the WAX blockchain, so they can be purchased and sold outside of the game.

And with this new production chain comes the next phase of colony development. Players contribute Data to research pools, both to help the Colony but also in the hopes of receiving a payout in the form of Discovery NFTs. Cargo ships use Fuel to travel back to Earth and return with supplies. And building Colony structures requires many resources, with contributions from many players.

Mission Four cards don’t come in the standard crates. Instead, players buy cards from card pools. There are four pools in all, each with different odds for finding carious card rarities. All cards for Mission Four, including Ownership, Sponsorship, and the new ultra-rare Solar Flare cards, will come out of random draws from these pools. Players may purchase multiple cards at once, or one at a time. Cards are revealed as soon as they are bought. Purchases from the higher rarity pools will cost more, but we don’t know the final prices yet

As players buy cards from the pools, the price for cards increases. But then, once cards are added to the pool, the prices drop again. This creates a fluid pricing model to match the supply and demand for Colonize Mars NFTs. This also allows the team to simply drop new cards into the pool, rather than creating a new sale for each Mission.

Mission four is spaced out into four, separate drops, each with a different theme. Drop one is construction, drop two is infrastructure, three is geology, and four is security. Mission Four also introduces a new card rarity, Solar Flare. These are rarer than Dark Matter cards and carry more weight when harvesting resources. Mission Four NFTs should arrive in July.

What is Colonize Mars?

Colonize Mars is a strategic colony simulation game built on the Wax blockchain. Players use their NFTs to aid in colony development and eventually create land expansions and build player-owned hubs. Players stake cards and maintain them at regular intervals to receive Martia tokens as rewards in the first Phase. Later phases will include expansion, expeditions, and discovery. The game also features Ownership cards, which earn passive income.

Colonize Mars has already released three sets of cards, with a fourth mission expected soon. Mission Four crates will only be available in the game store, though they can be purchased with both WAX and Martia tokens. This set of cards sees the first, temporary settlement on Mars begin to expand to something more permanent.

Colonize Mars introduced a thematic mini-game to their site. This game sees players driving a rover across the Martian landscape in search of resources. The game has a Minesweeper feel to it, with players having limited moves to try and find hidden resources. The team also updated their whitepaper in May of 2022