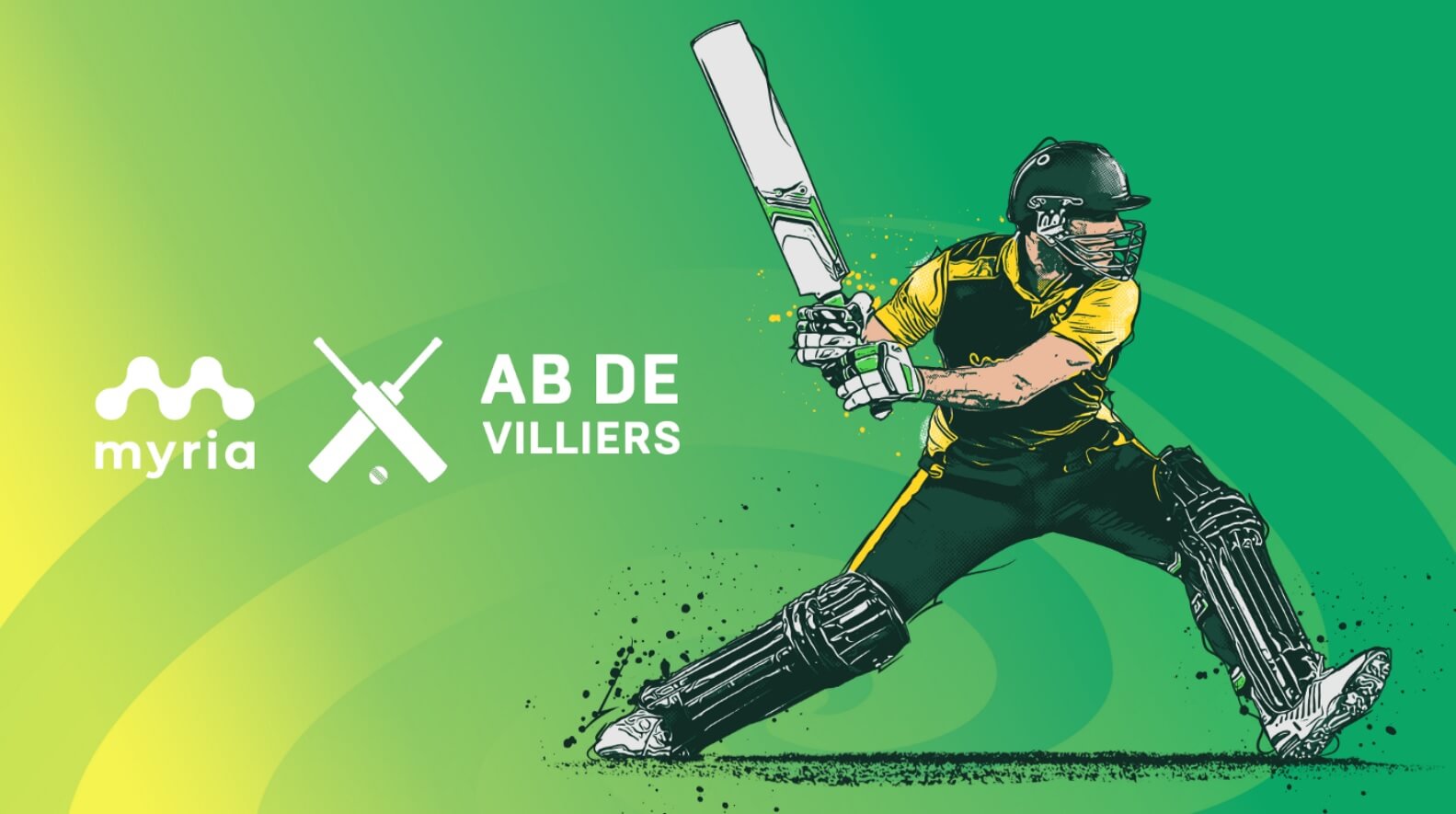 AB de Villers, the former South African international cricket player has partnered with Myria Gaming Studio to launch a blockchain-based play-to-earn cricket game. This is the first time a celebrity-backed blockchain cricket game will be released in the web3 gaming domain. The game is expected to launch in 2022 exclusively for mobile devices and would be available to download from Google Play Store and iOS App Store.

AB de Villers who is a legend in international cricket recently retired last year in November from all forms of cricket. Following his retirement, AB de Villiers has now decided to launch a new blockchain cricket game in association with Myria Gaming Studio with a vision to create a fun and casual mobile cricket game that will simulate real-life cricket on the virtual platform. For De Villers cricket is everything and he believes that the global cricket fan base of 2.5 billion people is good enough to onboard millions of cricket fans to the new cricket game.

The game will have play-to-earn models and NFT tokens along with exciting gameplay that will attract and entertain casual gamers who are cricket fans. The play-to-earn feature will also help onboard more gamers as it will help them earn money but De Villiers aims to bring players to his game who are actually interested in experiencing the virtual form of playing cricket just like they play it on the ground. The game will have all the elements and features of cricket and for players, it will feel as if they are playing a real match on the field. Therefore, money should not the primary motive for playing this game unlike other blockchain games whereas pure enjoyment of the cricket game will be the main reason players put their hands on it.

AB De Villiers was declared the Greatest of All Time among batsmen in history by Star Sports and has an immense fan following. Being one of the world’s greatest batsmen he has over 39 million fans all over the world. The huge fan following opens up a massive level of reach and engagement of the game from De Villier’s fans.

“The main thing is that there is no compromise. My cricket game will be fun and exciting just like a match on the field, but it will also be equitable and empower digital asset ownership. Myria shares my commitment and together we will bring new cricket experiences to my fans.”

The partnership between AB De Villiers and Myria focuses exclusively on a community of people which is cricket fans here and aims to build a blockchain game around this community by integrating exciting gaming features that are loved by cricket players and fans.

The game is set to release on mobile devices in Q2 2023. The developers have not yet decided a name for the game and will run a poll soon where you can name the game. You can register on the official website of Myria to win exclusive AB De Villiers Cricket game NFTs. Just visit the website and enter your email id to get the latest updates and NFT rewards.

According to AB De Villiers, he is looking for ways to build a blockchain-enabled cricket game and he has chosen the Myria platform for this goal of creating a new game. He has trusted Myria’s vision of empowering partner companies and communities in building blockchain games. The game will help players in acquiring digital ownership while keeping the gameplay exciting just like a real match. Myria offers a full-stack solution to partner companies to build games on the Myria ecosystem. Myria is the first Etherium Layer 2 scaling solution built for blockchain gaming. Together Myria and AB De Villiers will build a gaming ecosystem for the cricket community.

“It’s clear that we’ve entered a new era for gaming. Cricket icon and innovator, AB de Villiers, leads the cricket industry to move the enthusiasm people have for cricket into the digital realm. Cricket and crypto share the privilege of gathering communities that are incredibly energized and passionate. AB has placed his trust in Myria’s platform to bring his blockchain-enabled cricket game to life and together we’ll usher in a future of empowered gamers and communities.”

Abraham Benjamin de Villiers (born February 17, 1984) is a former South African cricketer. AB de Villiers was elected ICC One-Day International Player of the Year three times in his 15-year international career and was chosen as one of the five Wisden cricketers of the decade at the end of 2019. He is often recognized as one of the best cricketers in history. AB de Villiers retired in 2021 and has lately begun work on many projects, including his cricket game, which will be developed on Myria’s Ethereum Layer 2 scaling solution.