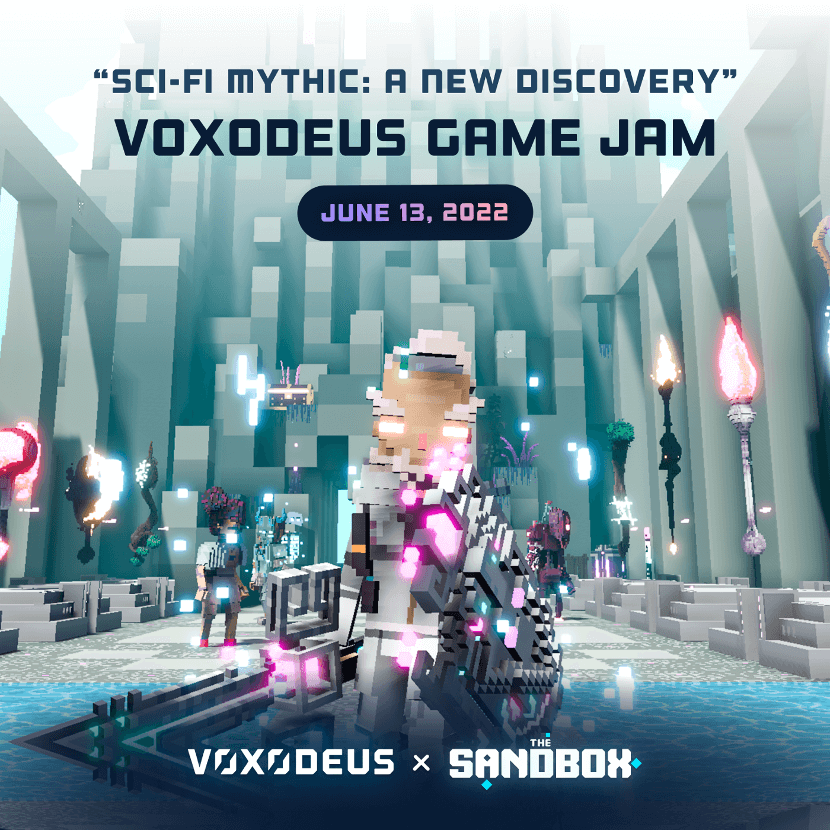 The Sandbox has partnered with Voxodeus, the world’s first large-scale digital 3D interactive NFT project to launch Voxodeus Game Jam on June 13, 2022. Game Jam is a game creation contest where participants have to create games and experiences within The Sandbox metaverse based on the theme of Sci-Fi Mythic Lore. The Game Jam contest will be accompanied by a Voxie NFT Avatar sale so that players will be able to enjoy their Voxies in The Sandbox and explore the new sandbox worlds with their Voxie Avatar. The project aims to give a pathway to allow outside characters in Sandbox Metaverse.

The Voxodeus Game Jam is a game and asset creation competition, and this time the theme is Sci-Fi Mythic lore, that creators have to use for creating experiences inside the game. Participants have to use the Game Maker software to create playable games with quests, missions, and exciting features. They can use these new lands to create exciting experiences for players as they travel throughout the Omega System.

VoxoDeus is set in the Omega System and the surrounding galaxy is situated in a unique corner of the space with sci-fi creatures and immortal cosmic animals. Participants have the freedom to create any experiences keeping in mind the theme of the competition. For example, participants can create games in which players can hunt for the powerful ancient Heirloom artifacts, weapons, and tools crafted by master blacksmiths that hold vast destructive power.

Players can venture into the far Forbidden lands that are full of mythical creatures, search for a rare Cypherverse artifact, a planetary scavenger hunt or a battle against robots, and many other experiences. Participants can add any of the above features to their game and also add missions and quests to make the game interesting.

The Game Jam event will begin on June 13, 2022, and the deadline for submission and voting is June 26, 2022. Anyone eligible to create an account on The Sandbox can enter the Game Jam. You can participate individually or in a team of a maximum of 4 members. Entries must be done through the Game Maker platform “Gallery” option and must also be submitted through this Google form. The results of the event will be released on July 23, 2022.

Each entry must have some playable features which include quests and missions. The entries must be unique and not copied from existing features in The Sandbox metaverse. However new features can be inspired by existing ones. The game length must be of at least 5 minutes and contain at least 25 different assets. Entries should include personally created assets on Game Maker software following the theme of Sci-Fi Mythic lore.

The total prize pool of the event is 15,000 $SAND and VoxoDeus NFTs. The pool is divided into 4 categories:

What are VoxoDeus Voxel Avatars?

Voxedeus Voxel Avatars are official Sandbox Game assets. Each avatar matches their Voxo. The avatars are a series of exclusive characters which will help to create more experiences inside The Sandbox metaverse. There is an original 10K avatar collection and each Voxie has a 0.22 ETH floor price. This is the first time external avatars and assets will be used in Sandbox.

The Sandbox Avatar that you create will automatically match with your Voxodeus NFT and will have the same species, rarity, and faction. “Each VoxoDeus NFT has a matching Sandbox Game Avatar asset”. It simply means that if you have a Voxo Avatar, all the features of that Voxie will be inherited by the Sandbox Avatar asset in the Sandbox metaverse. You can also visit the Unclaimed Avatars page to check which Voxies have not yet claimed the official sandbox asset.

You can claim your Voxo Avatar from Voxodeus Claim Page besides the option to buy it on Sandbox marketplace or Sandbox Asset Collection on OpenSea. Once you claim the Voxo Avatar and it is in your wallet you can use your character in any world or game of The Sandbox.