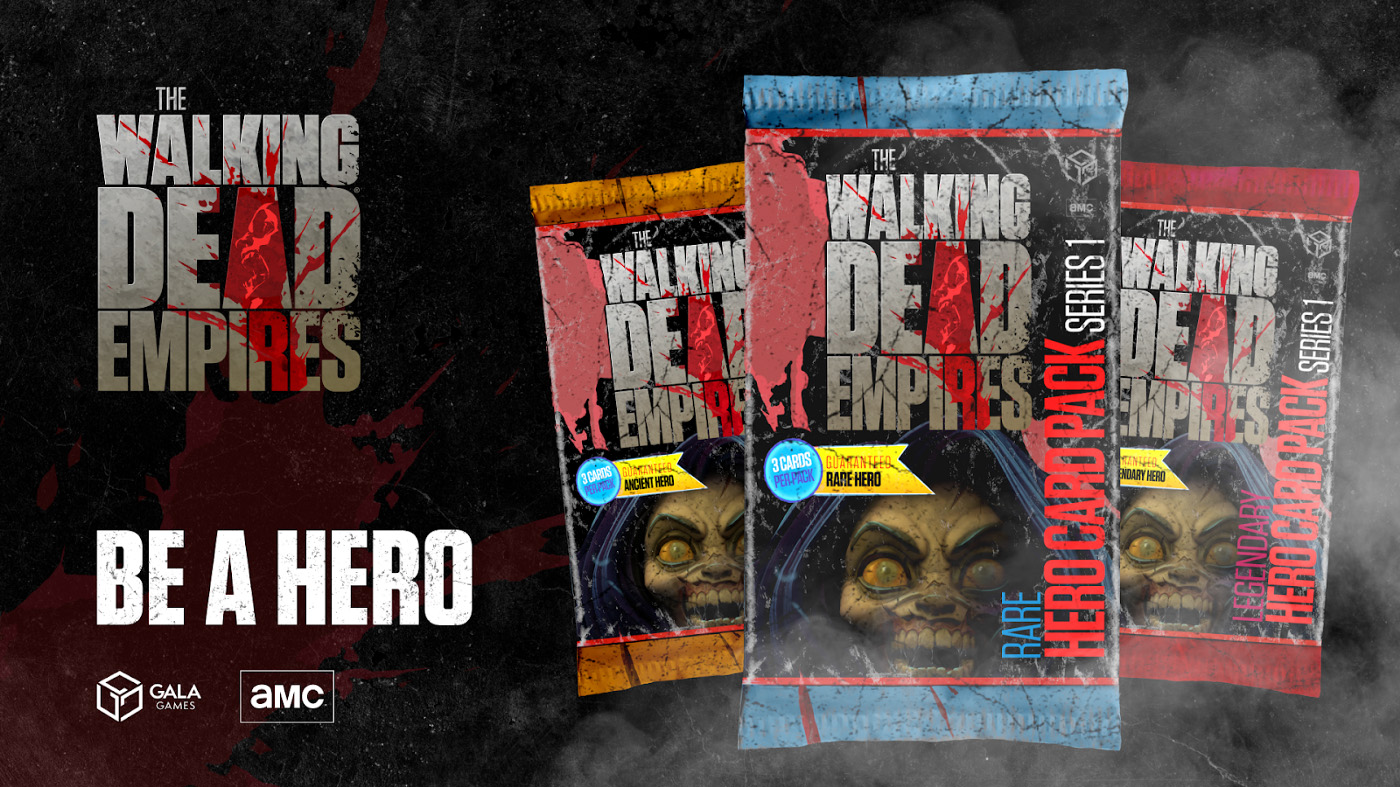 Surviving in a zombie apocalypse is hard. What every group needs is a hero or three. Well, now you can add a few Heroes to your arsenal with the Walking Dead: Empires Hero sale! Starting on June 6th, players can purchase Hero packs in three rarities. Equip these heroes for special bonuses and perks to aid in your fight for survival!

Much like the other Gala sales this week, this one is first open to those attending Galaverse II. Then, every 24 hours, the sale opens up to new groups — Founder’s Node License holders, Gala Gold members, and then the general public, in that order. The sale is already underway, having started on June 6th at 5:30 pm Malta time.

Eligible players can purchase packs from the Gala Games store. But these heroes do not come cheap. The rare packs cost 0.214 ETH, Legendary packs 0.537 ETH, and Ancient packs are 1.343 ETH!

Heroes are basically upgradeable avatars. Each has its own bonuses and perks, giving players some options to find a Hero that matches their playstyle. As players use their Heroes, they gain experience, allowing the owners to boost their stats. And any Heroes that aren’t being actively used can be assigned to NFTs in the base, providing other bonuses. Players can also merge three Hero cards of the same rarity to create one of the next highest rarity.

Packs come in three rarities — epic, legendary, and ancient. No room for common or merely rare heroes here! (actually, since this is labeled as the ‘first’ hero pack sale, we might see lower rarity packs in the future). Each pack contains three hero cards, with at least one matching the rarity level of the pack. Some of the heroes you may recognize from the show. Others are unique to Walking Dead: Empires.

Packs can be opened immediately after purchase via your Gala Games inventory.

What is Walking Dead: Empires?

Walking Dead: Empires is a multiplayer, strategy survival game set in the Walking Dead universe. Players must survive the apocalypse by fighting walkers and building their base. As players upgrade their base, they must defend it against waves of walkers intent on breaking down the walls and destroying the base’s flag. Players can also own special NFTs such as forges, laboratories, and furniture. Place these NFTs into your base to provide additional bonuses or functionality.

The game hosts a variety of melee and ranged weapons, many (if not all) of which can be crafted by players. Each weapon comes with its own set of special attacks. Players harvest and scavenge materials to use in crafting and base building. In Walking Dead: Empires, players can own land. The bigger the land plot, the more allies that can join you. Common plots can have up to three players in an alliance while ancient plots can support as many as 50!

The game will feature PvP. It will also have play-to-earn opportunities through the accumulation of DeadCoin, a token on Ethereum. A public demo is expected later this summer with an official release in late 2023.

Just recently, we were given a chance to see the very first gameplay footage from Walking Dead: Empires! This is a great video to watch and get a feel for the gameplay. We see the world in an angled, top-down view, as the player runs around, fights walkers, chops down trees, loots abandoned cars, completes quests, and crafts items. They even have an encounter with another player and demonstrate base building! Definitely worth a watch!