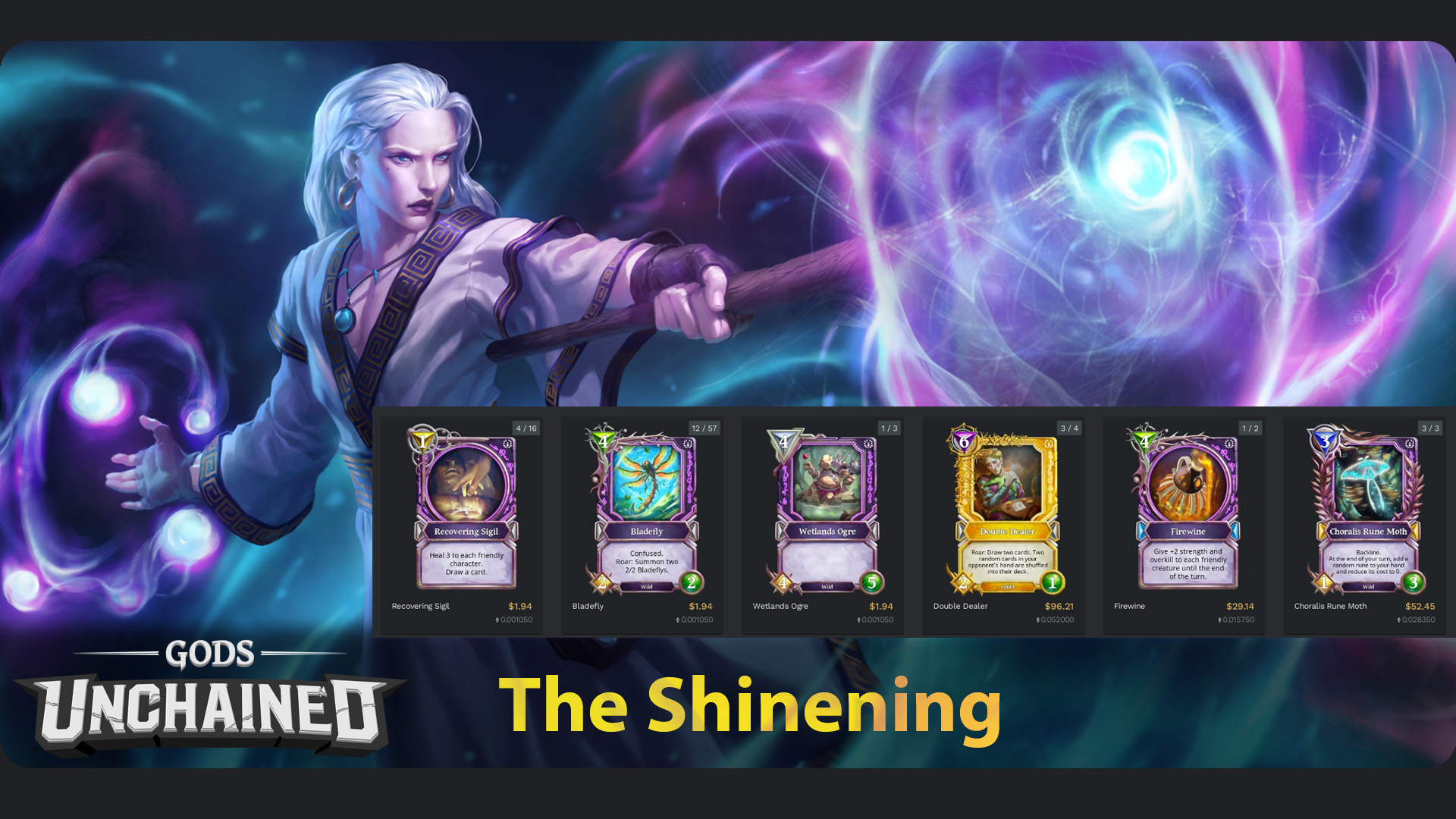 One of the long awaited features for Gods Unchained has been the ability to use the Forge to merge multiple copies of a card into a Shinier version. Well, at long last, that day is here! Gods Unchained players can now Shine Core cards at the Forge all the way up to Diamond! This brings a new facet to the game’s card economy, and has already resulted in card value increases across the board!

Most cards in Gods Unchained have four basic Shine levels – Meteorite, Shadow, Gold, and Diamond. The higher the Shine level, the rarer the card. The Shine of a card has no effect on gameplay. It only changes the visual look of the card. One of the long promised features for Gods Unchained is the ability to fuse multiple copies of a card into a higher Shine level. The wait has been quite long, but the first phase of the Shining feature is finally delivered!

After being closed due to high gas fees, in December of 2021, the Forge was integrated with Immutable X and re-opened to the public. This was an important step towards generating a play and earn economy. Once the Forge re-opened, players began creating and selling Meteorite level Core cards. Now, Core cards can move up to Shine levels they have never seen before — Shadow, Gold, and all the way to Diamond!

Shine Cards in the Forge

Core cards begin as ‘Plain’ and cannot be traded or sold. But, merge two of them together to make a Core Meteorite card, which can be sold on the market. Merge five Meteorites to make a Shadow, and so on up the levels. This means you need 125 copies to move a card from Meteorite to Diamond! And for Core cards, that is actually doubled, as you need to fuse two Core cards to make them Meteorite to begin with!

Forging costs both $GODS tokens and Flux, an in-game currency accumulated when winning battles. The rarer the card, the greater the cost.This Shining phase only includes Core cards, unfortunately. Shining upgrades for the other sets will follow once the team decides that the Forging function is stable enough.

The forging process is not a very streamlined one. It takes no less than six clicks for each Forging to Meteorite, 10 clicks when forging to Shadow and above! This includes a trip outside of the client to load up the transactions in your web browser. So, just to do a little math, for those who want to take a Plain Core card up to Diamond (250 cards in total used), that would require at least 1200 clicks (200 different transactions)! My poor mouse!

But otherwise, the process is smooth and quick and seems to be working well over all. And the team put together a nice chart to break down how it all works.

A boost for the Gods Unchained Economy?

This couldn’t be better timing for Gods Unchained. Already slowly losing active players and seeing the value of cards plummet, the Gods Unchained ecosystem really needed a shock to keep the economy’s heartbeat going. And this might be just what it needs. Not only will this bring renewed attention onto Gods Unchained, but it also provides additional use cases, and value for the GODS token and for the Gods Unchained cards themselves.

In fact, since this announcement, the value of the GODS token has shot up 80%, and Core cards are being snatched up from the markets with increasing volume as players begin polishing those cards! Once Fused and Shined, the cards can be put up for sale on Immutable X or Token Trove for free, with a small fee taken out when they sell.

Shining removes a ton of cards from the market — 125 Meteorites used for every Core Diamond card you see. This is a good thing, as Core card generation is essentially limitless. So there needs to be a means, and a reason to burn them. It will really interesting to see what happens with the card values for the other sets, as they have limited numbers of cards. But, they also already have Shadow, Gold, and Diamond versions in existence. But whatever happens, this feature is indeed a much needed boost for Gods Unchained, and a critical piece to the long-term economic viability of their game.

With three card sets under its belt and a fourth in the balancing phase, Gods Unchained has a wide variety of cards for different playstyles. Gods Unchained currently sells packs for Mortal Judgment. Players can buy and open packs from the official site. Secondary sales are available on IMX and Token Trove.