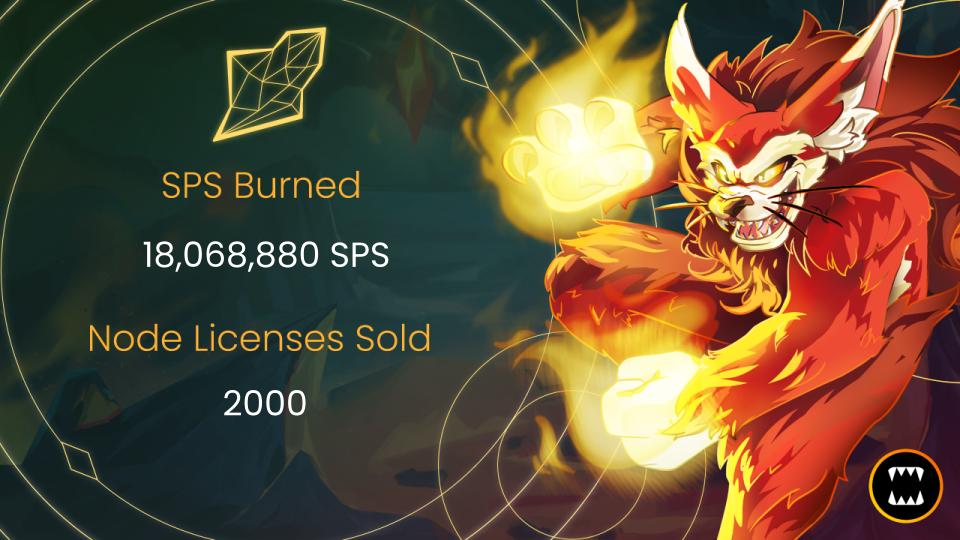 The first Splinterlands Validator Node License sale (pre-sale actually), couldn’t be called anything less than a resounding success. Over 1000 Licenses sold in the first minute, without any technical issues. The remaining stock sold out over the next 10 minutes. All the SPS spent during this sale is burned or locked away, resulting in about 18 million SPS tokens being removed from the market in 11 minutes!

Running a validator node is not a new concept in the blockchain world. But running nodes for specific apps or games is not as widespread. However, the idea does have merit, especially with numerous incidents over the years — Cryptokitties, Cryptoblades, Sunflower Farms to name a few — where a single app singlehandedly brought the hosting blockchain to a crawl. Offloading some of the game transactions onto their own distributed network provides relief for the blockchain, while still maintaining the concept of a decentralized application.

Gala Games led the way with their Gala Nodes, Town Star Nodes, and Music Nodes. Now Splinterlands joins in the fun with the first release of their Validator Node Licenses. These are NFTs that will allow the owner to run the validator software and receive a steady income of SPS tokens and Vouchers.

The pre-sale for Splinterlands Validator Node Licenses ended with over 18 million SPS being spent. Of that, 80%, or roughly 14.4 million tokens, will be burnt. The remaining 20% goes into the treasury to help fund future validator rewards. Licenses from this pre-sale cost $1,000 in SPS (which was a little over 9,000 tokens at the time of the sale) plus 500 VOUCHERS.

And now that the pre-sale has been completed, the first round of the regular sale begins. Prices in SPS increase significantly. Players can reduce that cost by spending vouchers, but even maxing out the voucher spending, you still end up paying $1500 for a license, or 50% more than the pre-sale from this morning! There are about 2700 Licenses left in this batch. Prices only go up from here! You can read more details on the pricing tiers in our recent article about Splinterlands Node Licenses.

The team plans to release the code as a docker container that can run on Linux (Windows and Mac versions come later). This means setup should be pretty easy, and running your node on an AWS server is possible as well.

The initial release for the node validators is expected in Q3 of 2022.

It’s important to understand the difference between the Validator Nodes themselves, and the Licenses. The Validator Node software will be free and open-source. Everyone can download and run the code. The system runs on a delegated proof of stake system, where anyone with staked SPS can vote for a particular validator. The validators with the most votes will be the ones used to validate transactions and receive rewards. The top voted validators split 375,000 SPS tokens monthly, with distribution weighted by the number of votes they have.

However, to spread the love, Splinterlands is also offering Licenses. Basically, Licenses allow the holders to run a validator node and receive rewards, even if they aren’t one of the top voted validators! Active License holders split a pot of 3,375,000 SPS tokens monthly! You do have to actually keep the software running though. License holders also split another reward pool of 20,000 VOUCHERs per month, providing steady, passive income.

Splinterlands is a play-to-earn, trading card game that started on the Steem blockchain as Steemmonsters. However, over time the project changed its name and switched to using the Hive blockchain. The game plays in a browser. Thanks to cross-chain functionality, cards and tokens can also be traded on the Ethereum blockchain and on Wax. Splinterlands now also has a governance token, called SPS.

Splinterlands is a cross between a deck-building game and an auto-battler. Players use their cards to create a combat lineup based on the rules of the match. Then, once both sides submit their teams, the cards battle it out until only one team remains. Players earn Dark Energy Crystals when winning matches, and can also earn additional cards and other rewards through Daily Quests and a recurring, two-week leaderboard contest.