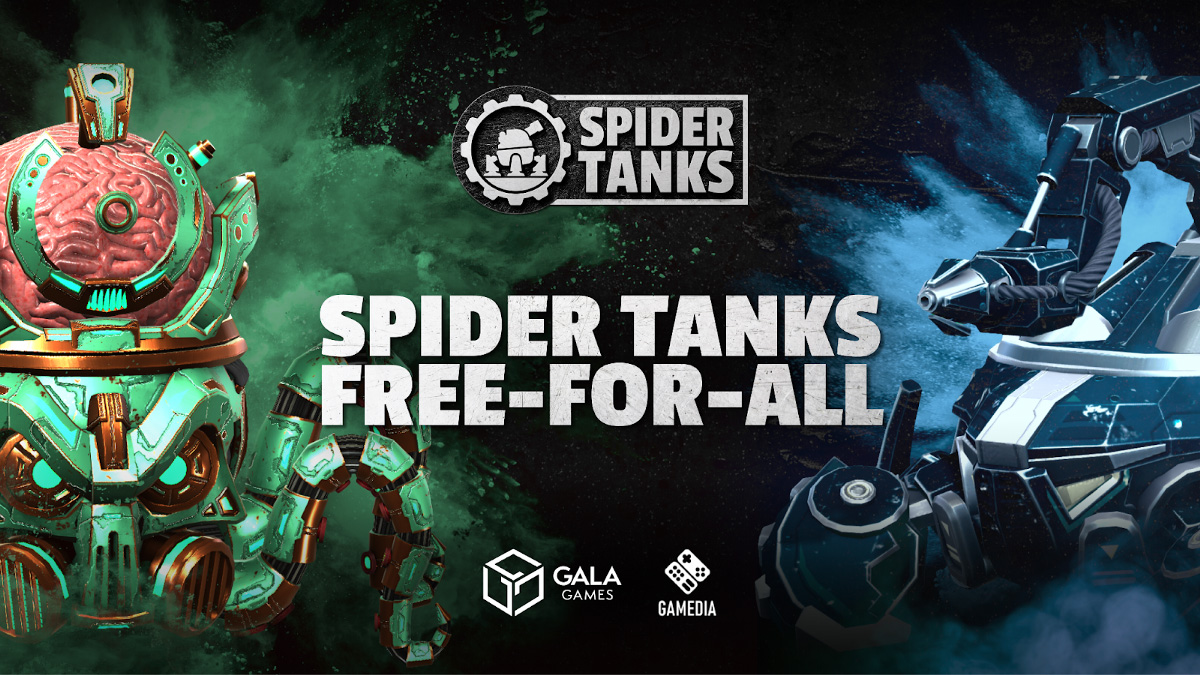 Spider Tanks, the multiplayer, online, battle arena (MOBA) that features two teams of five players fighting for glory and chickens. Previous builds required that players own an NFT tank part, but the latest releases open the doors to any and all players, free of charge! Play-to-earn options should be added to the game soon, but in the meantime, the Spider Tanks team is offering weekly prizes during the month of May.

Built as part of the Gala Games ecosystem, Spider Tanks has hosted various playtests since it was first announced. But, this is the first time we’ve had a fully open beta, with free-to-play options for everyone, while also allowing owners of Spider Tanks NFTs to equip them for battle! This is a great step forward for this play-to-earn PvP game.

And though Spider Tanks does not yet feature any built-in play-to-earn opportunities, they are currently running a May Mayhem event that offers large, weekly prize purses! Each week starts on the Monday at 9am PT.

The goal varies from week to week. For week one (ending on May 9th), the goal is to have the most number of matches played. For the first week, everyone’s tanks are equal. No special components or upgrades are allowed. Beginning in week two, however, players may equip their special Spider Tanks NFTs, and prize payouts are given out in tiers, based on the tank’s rarity. This way rarer tanks don’t have an unfair advantage. The goal for week two is to accumulate the most wins. For week three, rewards are based on achieving MVP status. And for the final week, players are looking for the best win rate with at least 40 matches played. Each week offers $250 thousand dollars in GALA tokens as prizes to the top 10-15% of the players! That’s a pretty serious prize pool!

So hop in, grab a tank, and start blasting!

What is Spider Tanks?

Spider Tanks is a top-down, tank-based, MOBA. Built as part of the Gala Games ecosystem, Spider Tanks already offers a free-to-play beta for anyone with a Gala Games account. Two teams of five players battle across a variety of maps and game modes. (hint: If you see a chicken, it’s probably something important!)

All players have access to a base selection of equipment. This includes three different tank bodies, each with different stats, and a number of options for weapon and equipment load-outs. Spider Tanks isn’t all about shooting. There are also healing abilities, shields, invisibility cloaks, and airstrikes… just to name a few! The game offers a practice mode for getting used to the gameplay or trying out new builds.

The action is fluid and fast-paced. Simple on the surface, Spider Tanks features a lot of equipment options, even for free players. There is definitely potential for team coordination and tank synergy when playing with friends.

NFTs for Spider tanks come in a variety of types from tank bodies to weapons, to map pieces to factories. Many are limited editions and some are special collaborations (including Snoop Dogg tanks!). Some are visual skins only, though many offer bonuses or a new type of ability.

Spider Tanks has plans for a play and earn economy including earning by playing, rentals for tank owners, land ownership in the form of maps, component creation with Factories, and even climbing to the role of Emperor for an entire planet! The token for Spider Tanks will be SILK. Initial production distribution should begin later in May.

To get a closer look at Spider Tanks, check out this video review from our very own Bruno!