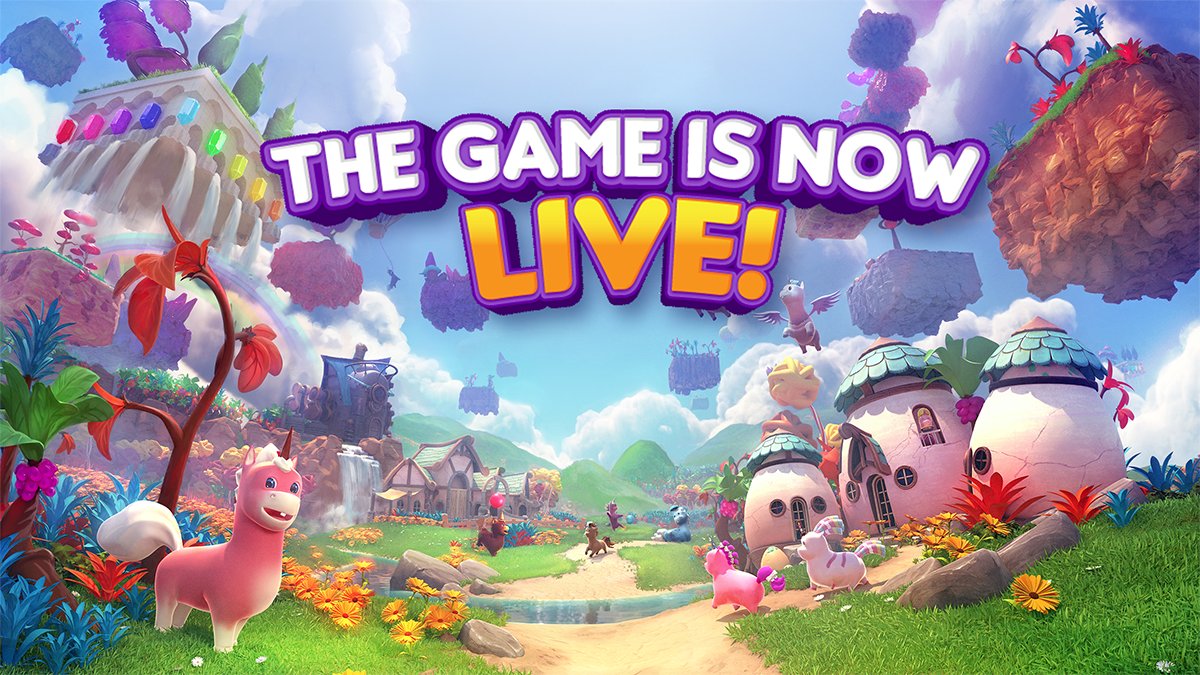 Starting from the 2nd of May, players worldwide can enjoy their Unicorn farms by connecting their wallets to the Crypto Unicorn website. At least one land is required to play, and new users can acquire one through the secondary market on OpenSea.

In order to effectively play Crypto Unicorns, you will also need… a Unicorn! They can be acquired on OpenSea. New Unicorns are likely to be sold on the marketplace as Genesis NFT holders start to breed their NFTs.

Crypto Unicorns started selling on OpenSea in the summer of 2021 and quickly became one of the most traded NFTs on the marketplace. Only six months later, Laguna Games followed up on their promise and released a playable first MVP for Crypto Unicorns.

During the first phase of the launch, only farming mechanics will be available. In the future, the team already plans to implement Jousting, Racing, and PvP matches. This first iteration is set to provide utility to their token and test their servers.

Crypto Unicorns aims to be a Metaverse owned by its players through a DAO. However, the game will be released in steps, alongside the voting engine and DAO infrastructure.

Before the end of Q4 2022, all game modes will be available. At the moment, though, the only thing you can do is to farm and collect materials. These two mechanics have been made available for the main purpose of breeding.

By planting seeds in your plots, you can generate berries. Unicorns love berries, and each Unicorn is fond of a particular one depending on its class.

The farming gameplay can be optimized by assigning Unicorns as workers. A plot of land assigned to a Unicorn will generate a better and faster yield.

Players can also add structures such as Stables, Workshops, Gathering Charts, and Nursery buildings. All buildings serve a specific function in the game.

Stables allow assigning a larger number of Unicorns to future endeavors on your farm. The workshop enables crafting. Gathering Charts let you sell and exchange berries and in-game items. Nurseries allow you to breed.

Breeding two Unicorns require Unicorn Milk, Rainbow Tokens, and Normal Berries. Optionally, players can add Class Berries when breeding to affect the results. Each Class Berry used increases the odds that the newborn will be of the same class as the used berry.

The team at Laguna Games sent us these video previews of the gameplay currently available on their website:

The two main assets of Crypto Unicorns are the main stars, the Unicorns themselves, and lands. Both feature specific attributes.

Unicorns can have one of 9 classes divided into three class types. All Unicorns of one class start out with the same base stats. Additionally, all Unicorns have a set of genes. Better genes will result in higher stats. Each Unicorn has 6 parts and 18 total genes.

During breeding, Unicorns may pass down their traits to the offspring. Players can influence the breeding process through booster packs, items purchasable on the Marketplace, or class berries (as mentioned above, each Unicorn will favor a specific type of berry).

Although important, Unicorns are actually secondary NFTs when it comes to gameplay. The effect of your yields will mostly depend on the Unicorn’s synergy with your land.

There are three rarities of Land NFTs:

Owning land that matches your Unicorn class will help you gather more materials during a quest, make the crafting side of the game easier, and also produce more berries – which must be burned for breeding together with the two game’s tokens.

Crypto Unicorn features a duo-token economy hosted on the Polygon Network. The team mentioned low gas fees and a carbon-neutral promise by 2022 as the main reasons for developing the most popular Ethereum Sidechain.

$UNIM (Unicorn Milk) is the Token used to breed and evolve Unicorns as well as craft high-value items and boosters. Players earn this currency by competing in various events and tournaments. When it is used, it is burned and removed from the supply.

$RBW (Rainbow Tokens) is the Governance Token of Crypto Unicorns. The total supply is 1,000,000 and the community reward portion is set to 30%. Large token holders (eg. team members and investors) have a long locking period to avoid inflation moves.

$RBW is the primary value token for the Unicorn multiverse. Players can stake it to receive $sRBW and vote on proposals. Staking for a longer period results in more voting power. The governance token can also be used to buy items and materials from the Rainbow Marketplace, breed unicorns, pay entry fees to tournaments, and much more.

To read a detailed breakthrough, refer to the Crypto Unicorns Whitepaper. Both coins are currently facing a drop in value after the release of the game.

Laguna games announced they will introduce their first battle loop (Jousting) and social features in Q2 2022.

The social features will include “Neighborhoods”, a new way for guilds to collaborate by buying plots of land and matching them together to create powerful synergies. This comes as an addition to the already planned NFT lending in the marketplace.

In Q3 2022, we might see the first Unicorn Races and tournaments across a wide variety of tracks. Each track will feature unique properties, including weather conditions.

At the end of the year, in Q4 2022, they will release a 5v5 RPG with PvE and PvP components. This is by far the team’s most ambitious project and will have an impact on their future plans for eSport tournaments.

Laguna Games is a game development and R&D studio specializing in Web3 entertainment. It leverages a cross-platform game engine comprised of powerful, product-agnostic tech and tools to rapidly deploy titles that are designed for real-time, large-scale and highly social gameplay. Laguna Games is being built by a global team of industry veterans who want to create blockchain games that will continue to make disruptive impacts on the gaming landscape.