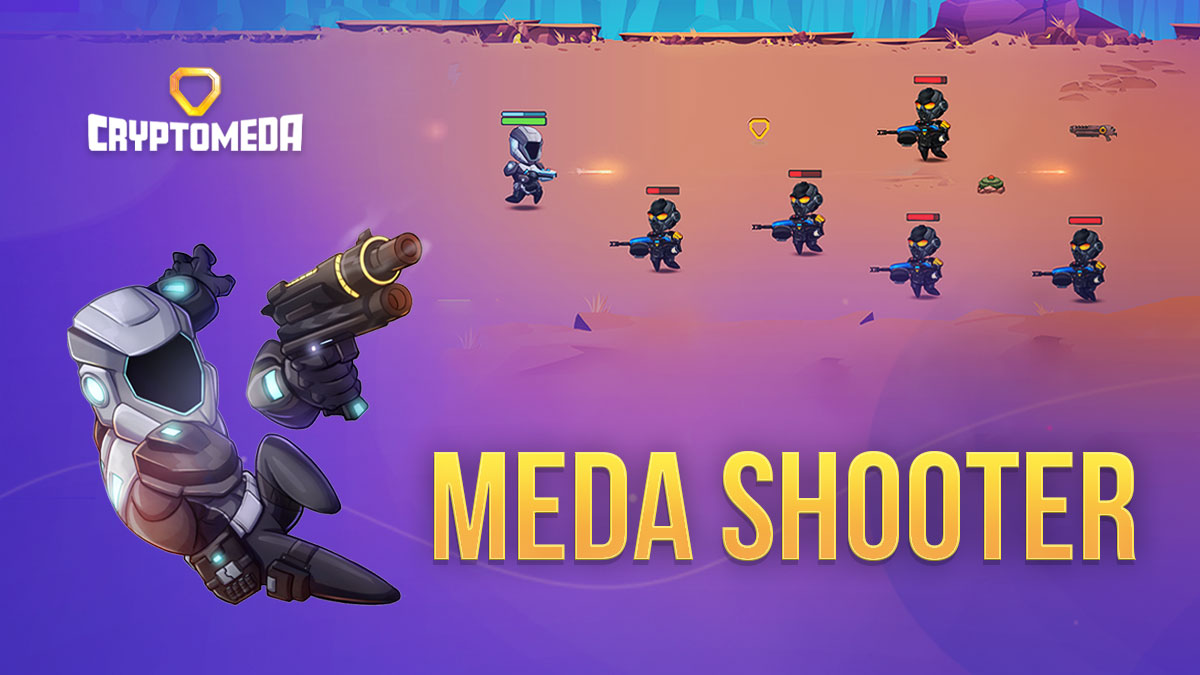 Cryptomeda recently announced the release of in-game NFTs for their mini-game “Meda Shooter”. Weapons acquired as NFTs will permanently enhance the stats of your character, making you stronger in the game.

The team at Cryptomeda doesn’t stop surprising their fans and is constantly pushing out updates, community events, and tournaments to keep players busy waiting for MedaWars to drop later this year.

For those who don’t know, Meda Shooter is an infinite side scroller game where you play as a Hero fighting the horde of swarm enemies. The player can move the Hero and dodge bullets. Killing enemies have a chance of dropping $TECH points, which are used to gain special perks. Perks help you to fight the progressively fierce hordes of enemies.

Meda Shooter is completely free to play, and each player can participate in the tournaments (more details below) – including ones without any NFT. To play Meda Shooter, click here, connect your browser wallet on the Polygon Network, and you’re good to go!

With the NFT weapon update, players will be able to take advantage of the play-to-earn model in Meda Shooter. As of now, only ranged weapons can be acquired as NFTs in the Marketplace, but melee weapons are coming in the next update.

Cryptomeda is partnering with other games to allow cross-game utility, just like implementing NFT heroes (characters) to Evolution lands next month. Weapons will have custom stats game developers can tweak by API calls, and each studio can allow players to use Cryptomeda weapons in their titles. Weapon smart contract supports additional features like crafting, melting, merging, or upgrading. These will be implemented in Meda Wars and can be used in partner games. Weapons also hold several other original characteristics, including three randomly generated attributes between 0–100, each available through API and synchronized with the blockchain. Therefore, weapons are guaranteed to be unique, with proof held on the distributed ledger for the world to see.

If you’re interested in learning more about Weapons in MedaShooter, which will then be usable across the entire Cryptomeda ecosystem and possibly even partner games, head over to their full announcement here.

In conjunction with their many partners, Cryptomeda is going to stream a Meda Shooter tournament, where the top 12 players from the week’s leaderboard will play in the final round. Here’s the complete Prize Pool:

The qualifications for the tournament start on April 25th, 2PM UTC. The finals will take place on the last day, the 30th of April. The first player will receive a free revolution card. Revolution cards are the rarest and the most valuable NFTs in the Cryptomeda universe. Only 60 pieces are currently in circulation.

Streaming will take place on Discord. Each player needs to inform the admins that they are going to stream the final round. Only one trial is allowed, and the score will be written in a top 12 final leaderboard.

Following the debut of this event, Meda Shooter competitions will be held every two weeks, with one day off in between rounds. It’s a terrific opportunity to engage in a new metaverse with growing potential by earning free NFTs, in form of weapons, heroes, and lands cards.

As a part of the Tournament promotion, Cryptomeda also released a free giveaway to win one out of 100 weapons. You can join in here by entering your Polygon Wallet Address.

Cryptomeda is a complete ecosystem based on non-fungible tokens (NFTs) designed to revolutionize an NFT gaming market.

The project aims to make the world of crypto fun and easy for all levels of experience. Built with blockchain technology, Cryptomeda is at its core an entertainment platform that provides users with different avenues of earning NFT Collectibles, which can be traded and used within the Cryptomeda ecosystem. This ecosystem is backed by the native currency of Cryptomeda—$TECH Tokens, enabling trade and commerce within the platform.