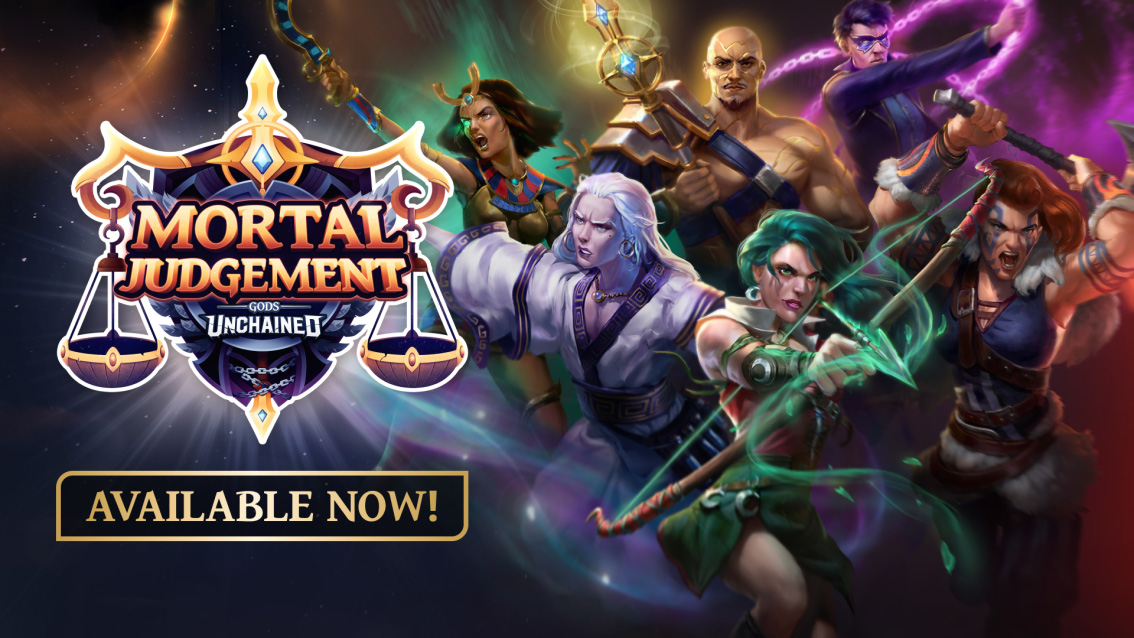 Packs for the latest expansion for Gods Unchained, Mortal Judgement, are now on sale. With three new keywords and nearly 200 new cards, expect this set to shake up the meta for a bit! In addition to the new keywords, Mortal Judgement brings us more cards affiliated with tribes, giving tribal-themed decks additional options, and several new deck metas, including Healing Nature and Weaken Deception.

That day of Judgment is here! Mortal Judgment! And by that, I’m referring to the latest expansion from Gods Unchained, a blockchain-based collectible, trading card game that pits two players against each other in an arena where each summons Creatures and casts Spells in a battle to the death! Mortal Judgment is the fourth expansion for Gods Unchained, following Genesis, Trials of the Gods, and Divine Order.

As usual for Gods Unchained, the Mortal Judgment packs come in four different flavors — Rare, Epic, Legendary, and Shiny Legendary. Each pack contains five cards and is guaranteed to have at least one card rarity that matches the pack rarity. Prices range from $2.49 for a Rare pack up to $149.99 for a Shiny Legendary. However, in a digression from previous sets, Mortal Judgment has no Chests for sale (yet). In previous sales, players could buy Chests, each containing six packs. But, since the capability to mint Chests on Immutable X is not yet available, the team decided to not include them in the initial Mortal Judgement sale. Once IMX enables their minting, we may see Mortal Judgement Chests for sale at a later point.

Also following the established pattern, the Mortal Judgment set contains one Mythic card, Omox The Mad. There will only ever be one of these cards. And yes, you can use your Mythic cards in the weekend tournaments for an unfair advantage! Once the Mythic card is found, it is replaced in the random draw with a Legendary Promo card called Spritefire. This card is not unique, but there will likely not be very many of them.

Early purchasers receive a discount on packs. This discount began at 20% and decreases as the set approaches $10 million in sales. As I write this article, the discount has already dropped below 19%. Cards are minted directly onto Immutable X when the packs are opened, allowing players to buy, sell, and trade in a gas-free marketplace.

This set contains three new card abilities — Echo, Empower and Tempt Fate. Echo adds a 1 mana, 1 health, 1 attack, copy of the card played to your hand. Empower allows the player to spend extra mana to give the card a buff. And Tempt Fate gives the card a random chance to receive a bonus when played.

As with previous sets, Mortal Judgement will undergo a post-release balancing phase. This means that text and stats on any and all Mortal Judgement cards could change! So be careful when buying or making trades, as that overpowered card you pay too much for may not be overpowered for long! No official timeline has been given for when the balance phase will end. Though we also have no official date for the end of the sale, Gods Unchained promises a two-week warning.

For those who want more detailed insight on the latest meta, check out meltysquid’s videos and articles.

With three expansions under its belt and a fourth just starting, Gods Unchained has a wide variety of cards for different playstyles. Gods Unchained currently sells packs for both Divine Order and Mortal Judgment. Players can buy and open packs from the official site. Secondary sales are available on IMX and Token Trove.