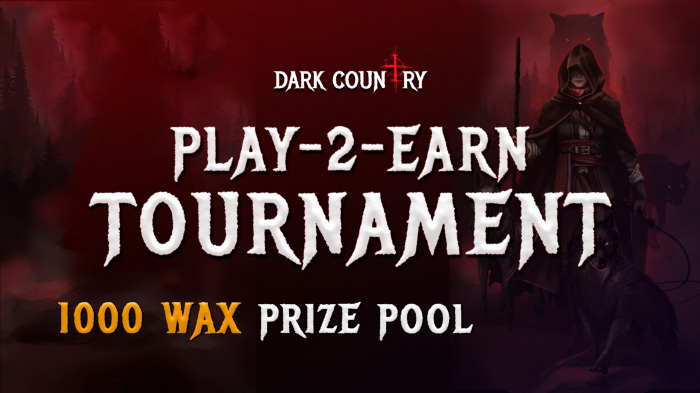 While we still wait for the land gameplay to move into release phase, Dark Country offers up a new tournament. One that utilizes a portion of the new land gameplay! This tournament extends across two weeks and offers a prize pool of 1000 WAX.

For a long time, Dark Country simply provided players with access to all the cards for testing purposes. But with the recent addition of a starter set for new players, it was time to move to the next stage. Now, owners of Dark Country NFTs must import their cards into the game via staking and build decks with their own cards. And with this new tournament, Dark Country deckbuilders have the chance to show us what they’ve got!

The tournament started on April 6th, but you can jump in anytime. To participate, you must own at least 40 Dark Country cards — enough to make a deck. Then login to https://landtest.darkcountry.io/ and stake your cards via the Asset link at the top of the page. Then install Dark Country if you don’t have it already. It uses the Itch.io launcher, which is also utilized by The Seventh Seal, another game on WAX. Now, you are ready to start playing!

The tournament runs four times a day, at 3 am/pm and at 9 am/pm UTC, with an ongoing leaderboard. The in-game leaderboard tracks the current standings. And while the prize purse is hefty, the prize pool is a bit shallow. Only the top three from the leaderboard will receive any WAX at the end. But, this tournament does offer a chance for players to get in plenty of practice and compete against the top players, who will certainly be vying for one of those top spots.

Though you could just buy the 40 cheapest cards on the market, if you want to actually have fun playing your deck, you might want to put some thought into building it! It’s probably also best to play a few rounds with the starter cards and familiarize yourself with the game first. You can find a number of tutorials and guides at https://chronicles.darkcountry.io/category/tutorial/

Dark Country is a collectible, trading card game built on the WAX blockchain. It brings a different theme to the world of card games with cowboys, guns, demons, magic, and undead minions! Dark Country plays like other TCGs you might be familiar with such as MTG, Hearthstone, and Gods Unchained. Players spend mana, play cards from their hand, and try to reduce the opponent’s health to zero.

The game is free to play and currently in open testing. The game provides a set of starter cards for everyone to play with. Players can also use their own cards to build decks. Dark Country features play to earn options via regular tournaments, special Play the Pros events, and by staking Hero cards on the Dark Country website.