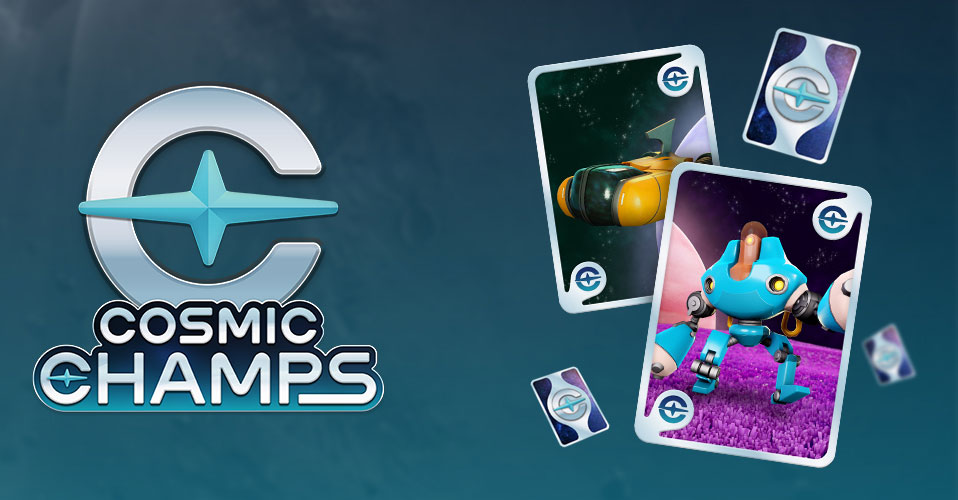 Cosmic Champs is the first 3D game landing on the Algorand Blockchain, an innovative carbon-neutral chain with great potential for gaming projects. Let’s have a first look at the Cosmic Champs project, the gameplay, the tokenomics and the roadmap ahead.

Most NFT Projects nowadays are hosted on the Ethereum blockchain or one of the many side-chains, such as Polygon or Immutable X. Cosmic Champs decided to fully embrace the startup mindset and went for a less popular option: Algorand.

Algorand is a stunning new blockchain, developed to be a carbon-neutral layer 1 blockchain and to guarantee low transaction fees. It has a host of new features never seen before in other chains, such as rekeying – the ability to transfer a wallet from a centralized entity back to the user.

The game takes full advantage of this by automatically creating a wallet for players as soon as they join in. All assets a player earns will flow to this wallet but they won’t be accessible unitl a  player decides to claim (rekey) the wallet or connect their own Algorand wallet. Players can get started in the game without even worrying about creating and connecting a wallet which is great for onboarding less tech-savvy users.

What is Cosmic Champs?

Cosmic Champs is set to be a unique Play to Earn title, giving NFTs real value and providing a free-to-play mode where players can enjoy the game without any financial commitment.

Cosmic Champs is a space themed game with a tower rush format where two players battle each other for three minutes. The objective is to destroy the opposing player’s base by any means possible. The winner takes home all the Treasure on offer and the loser leaves empty-handed.

Players build an eight-card deck before they go into a fight, which they use to attack and defend against their opponent’s cards. Champs, structures, and spells make up these cards. Winning requires a complimentary mix of each type of card and a strong battle strategy.

Players are dealt four cards from their deck at random at the start of each game. Playing each card requires a certain amount of energy. Players begin the combat with an equal amount of energy points, which refill every few seconds up to a maximum of 10 energy points. When a card is played, it is replaced with a card from the reserve.

Players can reach the enemy’s base following three paths, all different in length and difficulty. Cosmic Champs has similar gameplay to the hugely successful Clash Royale, with added play-to-earn mechanics.

In the future, the team aims to develop more games and mini games. They want to give their NFTs real utility and value within their metaverse. However, Cosmic Champs can be enjoyed in its entirety as a free-to-play game.

Players can battle, earn rewards, and learn the game for free. There’s no feature missing other than tournaments, which will require $COSG – the governance token – to enter. Players can still earn $COSG through battle, but a smaller portion is reserved for free players. The game features a balanced rate-to-earn algorithm to balance the earnings of players.

$COSM and $COSG can be earned by winning battles, while Steel Chips can be  earned just  by participating in battles. A ship is required to enter a battle, and can either be free (provided by the game) or an NFT (yielding higher rewards and earning Steel Chips). When a player with an NFT ship is in battle their ship will mine Steel Chips which can be used to mint new spaceship NFTs.

The rewards in $COSM will be pegged to the USD fiat currency, meaning all games will more likely yield a similar reward. For example, when the game decides to reward the user with a prize, the calculation will start from dollars and convert them to $COSM at the time of victory. This ensures that investing in the game doesn’t leave players empty-handed if the token price drops suddenly.

$COSG can also be earned for winning battles, but in much smaller quantities. There is a fixed max supply of 270 million – which makes them much more valuable, as they also represent the governance token and will be the main token used by the DAO to determine the weight and substance of a vote in the proposal engine.

$COSG can be used to purchase NFTs and participate in off-game mechanics, such as the marketplace or staking NFT and $COSG in liquidity pools. 20% of the total $COSG supply will be distributed to stakers.

On the other hand, $COSM is the main play-to-earn reward token and doesn’t have a fixed supply. It will be burned after players spend it in-game. The currency can be used to upgrade champs, forge new NFT cards, or profit from planet NFTs.

The on-chain tokens can also be earned by holding plane NFTs. Each battle in the game happens on a planet. There will be two planets at first, but more will be released. An equal number of battles happen on each planet. The owners of planet NFTs will earn tokens  from each battle that takes place on it.

The roadmap for Cosmic Champs fully reflects their values and vision for the future: the first mass adopted play-to-earn game on Algorand, available on mobile and desktop alike, with earning mechanics available to free-to-play users that engage with it enough.

The launch of $COSG and the first NFT season (basically, an NFT drop) are supposed to happen in April and May 2022, and the game beta should launch later in Q2 2022. During the rest of the year, the developers will launch new NFT seasons, following their unique fractional NFTs to generate them.

You can read more on their revolutionary approach to NFT generation here. It uses some great capabilities of the Algoraland blockchain, which can be used in other games in the future.

Tournament Gameplay is scheduled for Q1 2023, and a full switch to a DAO infrastructure is planned for the end of 2023.

Although in its infancy, Cosmic Champs managed to get 1,000 discord members in little time (join their discord), and are rocking it on Twitter with over 1,300 followers without any aggressive marketing campaigns. Developed by a small team of talented individuals, including a PhD candidate and a senior blockchain developer, they’re backed by industry experts and have the support of Algorand Foundation.

Cosmic Champs is a nice idea that has yet to become a reality, but it’s surely worth a follow if you’re interested in promising projects for late 2022. Their NFT fractal generation is likely to produce some highly valuable NFTs, and their free-to-play model will attract people worldwide playing from smart devices and desktops alike.

The first cross-platform, no-friction game is coming, and we hope to see more great news from the team. Their in-depth whitepaper, their research on the market, and their overall pitch is solid. For more infos, check out the Cosmic Champs official website here.

As this is a very new game, always do your research first. We can’t say anything for sure, but we’ll follow the project closely and keep you updated on their upcoming NFT drop and game launch.