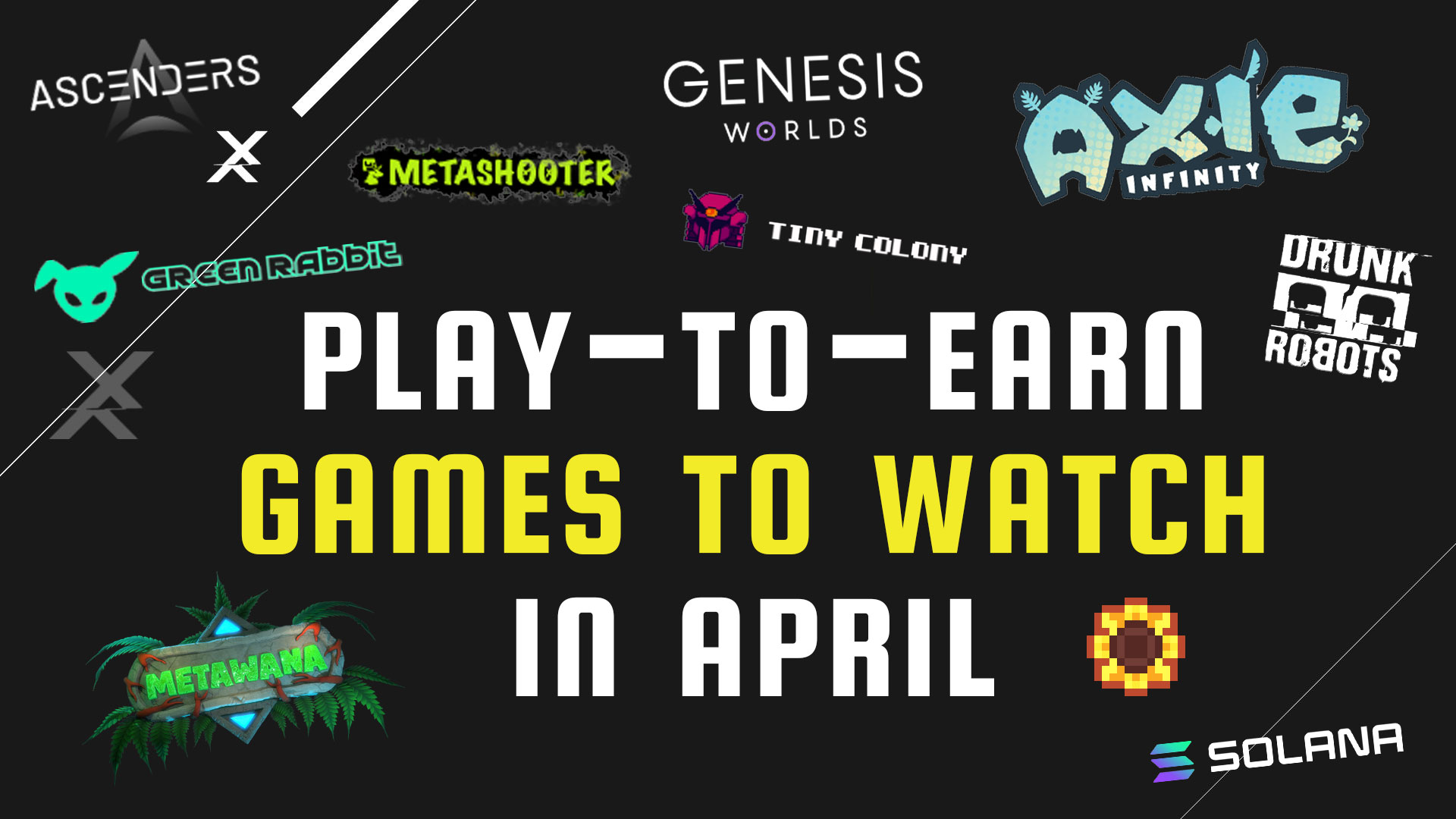 April showers us with quite a few events and releases in the play to earn, blockchain gaming world. We have launches, mints, alphas, and even an IDO! Read on for more info and important dates in this April 2022 edition of games to watch!

2021 saw a significant rise in the gaming scene and an explosion of speculation, much of which pushed gaming tokens and NFTs to all-time highs last spring. But much of that hopeful adulation, has died down, as most of these games have had not much to show and even less to actually play. But that is about to change in a significant way in 2022. And April is just a sign of what’s to come. We have a lot to cover, so let’s get too it!

Long the biggest name in blockchain gaming, and play to earn in particular, Axie is near to releasing a major overhaul of their game. Known as Origin, this release brings a slew of new abilities, a revamped combat system, and a new free to play system.

Delayed due to a recent hack on their Ronin chain, expect to be able to play Axie Origin on April 7th.
Read more about the Axie Inifinty Origin launch week here.

Though IDOs seem to have fallen off in popularity, here’s you chance to join one for Drunk Robots. The primary currency for Drunk Robots, $METAL, goes up for IDO sale on April 7th. Three launchpads, Liquidifty, Gamefi, and Trustpad will all provide opportunities for users to get in on the initial token price of $0.01. Drunk Robots and its tokens live on the Binance Chain.

Notorious for bringing the Polygon network to a crawl, Sunflower Farmers is relaunching and rebranding as Sunflower Land. Their contracts have all been rewritten to close coding loopholes and try and discourage botting. The new game will begin with a slow rollout, adding new features over time. Expect to see the initial launch on April 7th.

Offering a pretty sweet incentive to get involved with the Avalanche blockchain, Ascenders, an action RPG, launches a free to play version alongside a one month challenge for over one million $AGC token in prizes. Players can download the demo game and try out the combat challenge. Those with the top 100 high scores at the end of the month with $AGC, governance tokens for Ascenders.

Learn more about Ascenders and their Combat Challenge here.

Hunt virtual animals for fun and profit in Metashooter! Running on the Cardano blockchain, Metashooter features its own token, NFTs, and land ownership. Get ready to try out this hunt to earn game as they bring us a first look and early alpha sometime in April.

Genesis Worlds brings us their next set of Mining Claims. Each Mining Claim issues daily GENESIS tokens and runs on a bonding curve, meaning that cost for new Claims increases as more are purchased. This release sees five new worlds opened, with the first, Xoth, on April 7th, and the other four the following week. Mining claims must be purchased with GAME tokens.

Read more about the next Genesis Worlds Mining Claims here.

Pretty much any Solana game should be worth looking at now that OpenSea has announced their intentions to support Solana NFTs starting in April. Any move by the biggest NFT market is sure to bring additional notice. No official launch date, but the technology and partnerships are already in place, so we expect an announcement very soon.

Speak of Solana, the ant-themed game, Tiny Colony, is launching their character mint there on April 28th. Unlike other 10k projects, players get some control over the ant person. Minters can choose from nine different factions at mint time. From Hero to Scientist to Samurai! Tiny Colony already had their Nest sale, and Nest owners receive Whitelist spots for the Character mint. Other folks have to complete some basic tasks in a Gleam contest to vie for a spot.

Learn more about Tiny Colony and the upcoming mint here.

Mint Baby Buds, on… you guessed it, April 7th! Metwana promises some sort of hybrid fusion of farming simulator and creature battler with a 420-themed style. The mint will be on the Fractal marketplace on Solana. The initial mint cost was supposed to be 2 SOL for the whitelist mint, and 2.5 SOL for the public sale, but, given the recent market rally, the team decided to review the pricing. It will be 1.25 SOL for the WL sale and 1.69 for the public sale…

Green Rabbit has steadily assembled a complex crafting ecosystem over the past year. And though the final fruits of that labor are still around the corner, we do have the first looks at the 3D world of Green Rabbit, including their social hub and free 3D, practice racing! This is supposed to go live at 11pm PST on March 31st. We don’t have a lot of details yet, but once it’s up we’ll get all the important info to you. Green Rabbit runs on the WAX blockchain.