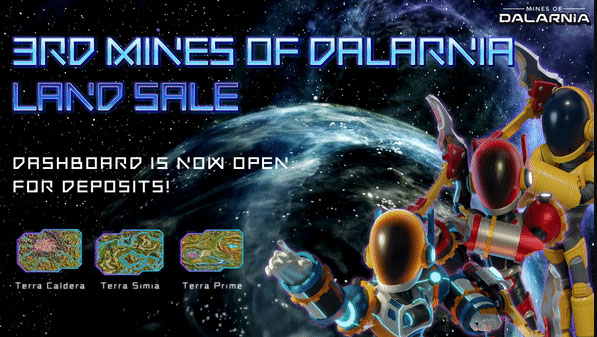 Mines of Dalarnia announced their third and last public land sale. Like the previous ones, the sale works following a lottery system and is open to all DAR tokens holders. Here are all the details on how to participate in the upcoming sale.

This sale features plots on Terra Caldera, Terra Simia, and Terra Prime. 5,200 plots will exist at launch (4,160 acquired by players via the first three land sales and 1,040 public plots). In this public land sale, 2620 land plots (or mines) will be up for grabs. This is the final land sale before the mainnet launch.

On March 22nd, the developers confirmed the game will feature four planets at launch:

1. Luna Praxis, the free-to-play practice moon which contains only basic resources. P on this planet are publicly owned and can’t be resold on the open market.

2. Terra Prime, the site of the first Terraforming Capsule deployment. The planet features a combination of private and public plots.

3. Terra Simia, the second Terraformed planet and the homeworld of Ape-like bipeds. Both private and public plots are available on Terra Simia.

4. Terra Caldera, the third Terraformed planet, is dominated by a massive crater-like structure. As for the other plots for NFT holders, this one also features both public and private plots of land.

How to Buy Land in Mines of Dalarnia

To have a chance to get your hands on a Mines of Dalarnia Mine, you will need to deposit DAR tokens on the official website. Deposits are open since March 22nd and the snapshot period will last from March 28th until April 3rd.

The snapshot period will reward lucky lottery ticket holders with a plot of Land. A 100 $DAR ($90 at the time of writing) registration deposit earns you a baseline number of tickets per day. Depositing 100 DAR tokens will automatically generate 100 tickets per day. In addition, For each $DAR deposited, players will get one additional ticket per day. In the last lottery, 38 million tickets were issued and 500 plots won.

You can join the lottery to win your plot on the main website after connecting your MetaMask wallet. The developers also introduced Uniswap V2 for those who prefer to use the new version for staking.

Winners will exchange the 100 $DAR used to enter the lottery to buy a plot of land. Participants that won’t end up winning will be able to withdraw the $DAR deposited.

What is Mines of Dalarnia?