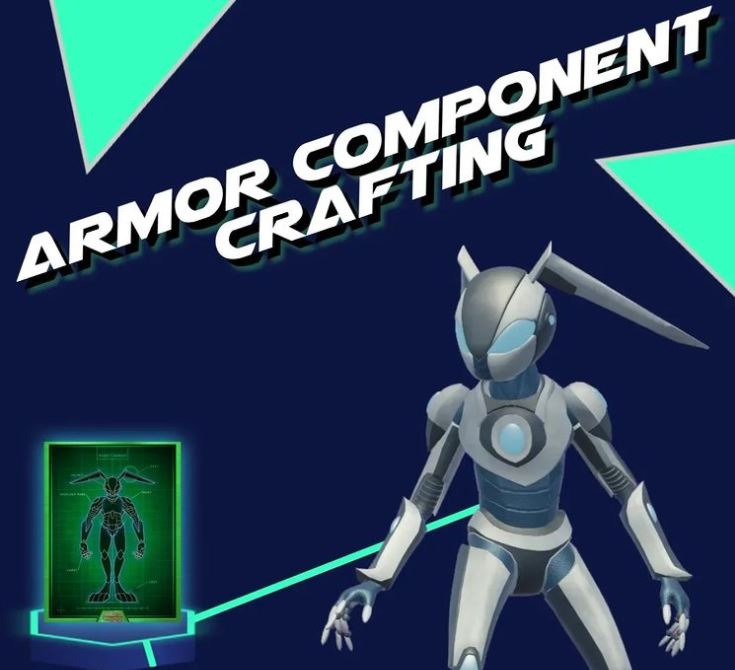 Green Rabbit adds the final component of their somewhat intricate crafting ecosystem, Armor Crafting. For a while now, players have been able to create Greenprints, the base plan for building Armor. And they have also been boosting those Greenprints with special Orbs to make them stronger and gathering materials from faraway lands. Now, it finally all comes together.

Piece by piece, Green Rabbit has assembled a complex, interwoven crafting system. At the culmination of all of this is the crafting of the Anima Armor that players will use in the 3D racing game. And the first step of Armor Crafting is acquiring a Greensmith and a Greenprint.

The Road to a Greenprint

Acquiring a Greenprint can be as simple as buying one from Atomic Hub. However, if you want to craft your own, the process is much more involved.

Crafting a basic Greenprint requires Shellinium, and one or more NFTs. Shellinium is a token on the WAX blockchain. It is generated by staking Green Rabbit NFTs with special Flash Drive NFTs on the official website. The special 3D Figure NFTs can craft Greenprints by themselves. Otherwise, there is also a 4-component crafting option, using the following NFTs: one Lore Tablet, one Action Image, one Diorama, and one Lore Coin. You can mix and match any rarity of these items, though as you might imagine, higher rarity NFTs provide higher chances of receiving higher rarity Greenprints.

Though any Greenprint can be used for crafting, you want one that has been boosted. Ten times preferably (that’s the max). Each boost gives a bonus to the stats of the Greenprint and can push the stat bonuses up by more than 120% total! Sometimes, newly generated Greenprints come with a bit of a stat boost already. This can range as high as 15%. It’s best to use these pre-boosted Greenprints as a starting point.

But how do you make boosters? The boosters otherwise known as, Ascendant Orbs, come from burning 10 Greenprints to make one Orb of the same rarity. This process is called Greenprint Fusing. It doesn’t work 100% of the time, but if it did, we’re looking at 101 Greenprints being used to make 1 single 10x boosted Greenprint!

OK. So you have a Greenprint, now it’s onto the Greensmith!

Putting your Greensmith to Work

Green Rabbit held their Greensmith sale in early March of 2021 . If you don’t get one then, they are available from secondary sellers on Atomic Hub. The first time a Greensmith is added to the Workshop, they become bound to a specific animal totem. From then on, they receive bonuses when crafting armor parts for Armor that corresponds with their totem. This can be further boosted by bonding a A.N.I.M.A. Mod NFT, preferably with the same totem.

Then, select a Greensmith in the workshop, select a Greenprint for them to work on, and which part they should craft. At level 1, Greensmiths can only work on the Gloves component. Other armor components begin to unlock at level 5. When choosing a Greenprint, one that has been boosted 10 times (the maximum) is the best choice for stat bonuses and Materials reduction.

Once your Greensmith and Greenprint are ready, it’s time to begin the crafting process. This takes time, Shellinium, and Materials. Materials come in four varieties, Floria, Elder Tree Sap, Versatopium, and Nanore. Players acquire Materials through Foraging missions, which is a whole other process.

On top of that, Anima Armor comes in six components — Gloves, Helmet, Sleeves, Chest, Pants, Boots. Each component must be crafted individually, and each has its own Materials requirements. When crafted, the component receives a rarity rating. If the rarity returns as Poor, a Greensmith can dismantle the part and recover a portion of the used Materials. Discerning Greensmiths will disassemble armor parts that don’t meet their standards.

The required materials must be in your in-game vault. Luckily, the game features an easy to use interface for moving resources into the vault.

The difficulty in acquiring all of these various components is what makes the Green Rabbit crafting system so interesting. It would take a lot of investment and effort to be able to craft top-quality products by only using your own resources. However, the complexity of the setup allows for smaller entrepreneurs to find a specific niche to focus on.

I’m not a huge fan of the hard cut-off for skill level requirements when crafting. I would prefer a sloped system that allows for attempts at any level, with exponentially decreasing chances of success the farther away the Greensmith is from the required level. Forced grinding for crafting is a crutch that has been the bane of many a game. Hopefully it won’t have too much of an effect here.

The intricacies of the crafting system in Green Rabbit is too much to cover in a single article. For anyone involved in Green Rabbit crafting or interested in getting involved, I suggest you read the official documentation.