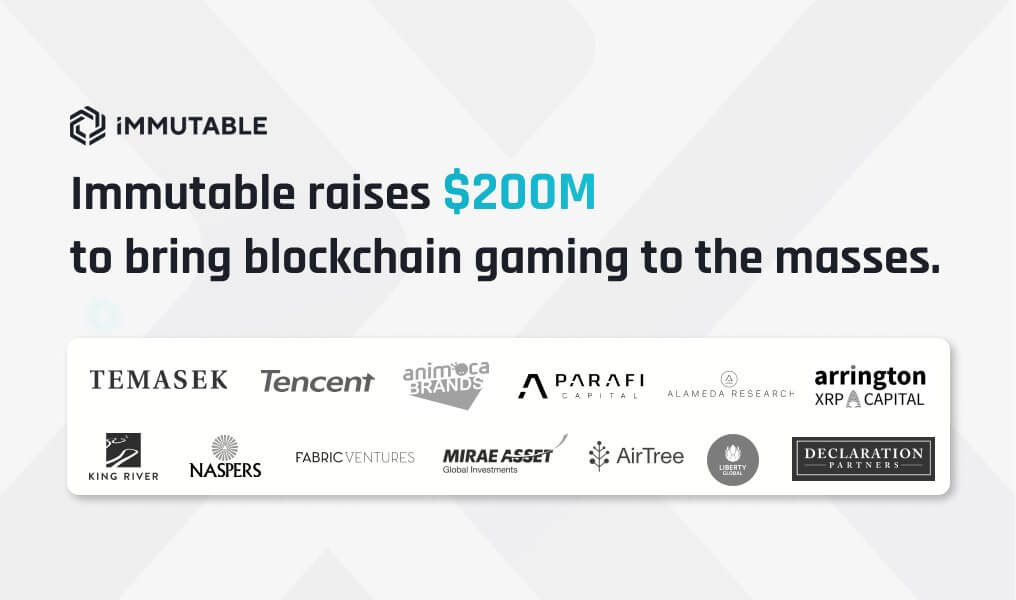 After raising funding at a valuation of $410 million in 2021, Immutable just raised $200 million in the Series C funding round bringing the company’s valuation at $2.5 Billion. Several big investors participated in this round, including Tencent and Animoca Brands.

Immutable has recently raised $20 million funding in a Series C funding round that values the company at $2.5 billion. They have raised the amount in a financing round led by Singapore’s Temasek. Temasek is a Singaporean government-owned investment company. Companies like Tencent are also among the investors.

The funds raised would boost cryptocurrency and NFT ventures to bring blockchain gaming to the masses. The round is also backed by Animoca Brands, ParaFi Capital, Arrington Capital, Mirae Asset, and Liberty Global.

“We are excited to raise this capital so we can help deploy it aggressively through M&A opportunities,” Immutable’s co-founder and president, Robbie Ferguson, said. Immutable said they would also use the funds to expand their platform and explore merger and acquisition opportunities.

Earlier this year Immutable announced a partnership with GameStop to launch an NFT marketplace along with a fund worth $100 million to support NFTs for Web3 and metaverse gaming. Companies like TikTok, OpenSea, Ember Sword, Illuvium, GreenPark sports have already started building on the Immutable X platform.

We can see that right after the announcement, the $IMX token price shot up from $1.12 to a local high of 1.78. But the recent announcements are only the beginning for Immutable. With all the partnerships and funding, we can expect many good news to come in the coming months.

Immutable is a Sydney-based start-up that provides Ethereum blockchain infrastructure for transforming digital asset ownership in the video gaming industry by offering gas-free NFT transactions. The company was founded in 2018 by James Ferguson, Robbie Ferguson, and Alex Connolly. It powers the world’s most popular blockchain games by building marketplaces and infrastructure so that developers can integrate play to earn features and free-market economies inside the game. The Start-up currently has a team of 165 people and has targeted to hire 200 new employees globally over the next year.

Immutable is known for developing NFT games like “God Unchained” and “Guild of Guardians” that allow players to trade NFTs and earn rewards. Gods Unchained is the second-largest blockchain game and is powered by Immutable X.