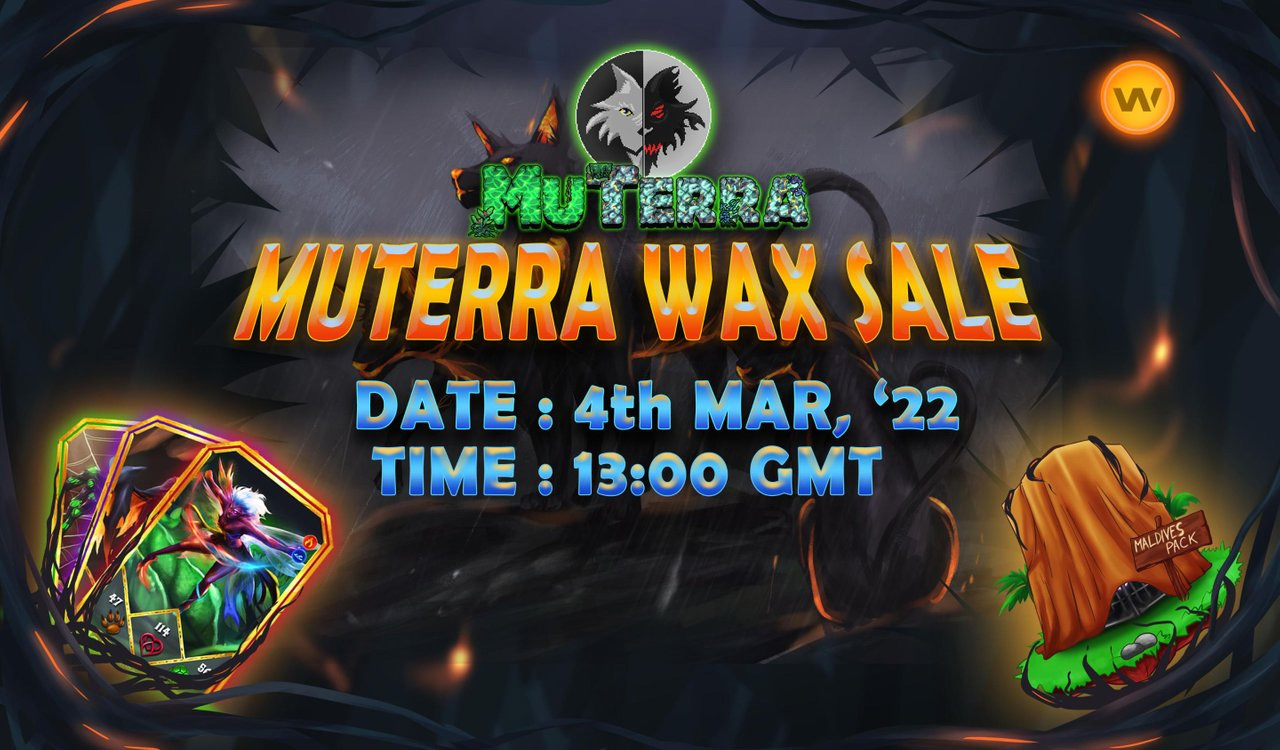 MuTerra, a post-apocalyptic creature tamer and battler game on the Hive blockchain, announced the details of the final sale for their Maldives packs. These packs are considered alpha cards, and wont be available again. MuTerra allows its NFTs to be held on Hive or on the WAX blockchain. For this sale, the Maldives packs for Muterra will be available on WAX at Neftyblocks.

These packs go up for sale on at 13:00 GMT on March 4th. And though the sale extends through March 11th, I don’t expect it to last that long! MuTerra held a pre-sale booking event for 4,000 packs. They were over booked within a day. This is the final sale for Maldives packs. Only 20,000 packs minted in total. The first 10,000 packs sold on Hive back in September and another 1,000 airdropped as promotional rewards. With the previously mentioned pre-sale, that leaves this sale with the final 4,000 packs!

For the first 30 minutes, only those whitelisted can make purchases. But getting whitelisted is easy. Barely an inconvenience! All you need is at least one MuTerra Promo NFT in your WAX wallet an hour before the sale. These Promo NFTs can be picked up for $2-3.

Packs cost $5 each, with a maximum purchase of 99 per transaction. That’s right, 99 packs. But not just per wallet. But per transaction! There will be a delay of 30 seconds, but that’s not long if a few folks decide to buy packs by the hundreds!

Maldives packs come pre-minted, so pack #1 will be distributed randomly rather than to the fastest clicker. It feels like the market for #1 mints is not what it used to be, but some people still give it value.

Payment accepted in either WAX or NEFTY, the utility token for the Nefty platform. Pack owners can can transfer the packs to the official site (https://play.muterra.in/) and open them there. Each pack contains 5 Mutees, with at least one guaranteed to be Uncommon or better. Some Mutees come in rare, gold foil versions, and some are gendered as male or female. With 20 different Mutees, these varieties result in 72 total possible card variations.

The MuTerra team recently released a breakdown of their plan for long-term management of their game economy. The primary currency for the game is MUT, or Mutee Utility Token. This token lives on the Hive blockchain and is earned in-game through killing or capturing Mutees, burning raw materials, winning PvP matches, and won from leaderboards, tournaments, and seasonal rewards.

Players may burn Mutee NFTs, producing MUT. Considered Limited Edition, Mutees from the Maldives packs have MUCH higher burn rates than the Mutees found in the wild.

There will be around 250 different raw materials that can be found in-game. Materials are categorized as Minerals, Plants, and Mutee parts. Used for crafting, players can also exchange raw materials directly for MUT.

So what’s the use of MUT? The team has put some thought into their economy, and created a number of sinks and use-cases for the MUT token. Leveling up Mutees, boosting stamina regeneration, crafting, and purchasing Materials Crates are the main MUT sinks.

In addition to finding Materials in the wild, players will also be able to purchase Crates full of goodies. One million Crates in all, divided into ten tiers of one million each. The price for these crates starts at $1 each and increases by another 1$ with each tier. Once 500,000 Crates have sold, the remaining Crates will only be purchasable with MUT. All MUT from crate purchases will be burned. There will also be special airdrop rewards at each tier for players who purchased Crates in that tier. This is an interesting system, and could potentially result in Crate speculation, especially for those who get in on the early tiers!

Though we don’t have any official word of an open beta, the game is currently in a testing phase of a first development build with a few, selected players. They team lets players suggest names for Materials and Mutees, including this cuddly, legendary beast, now known as Magmilla!