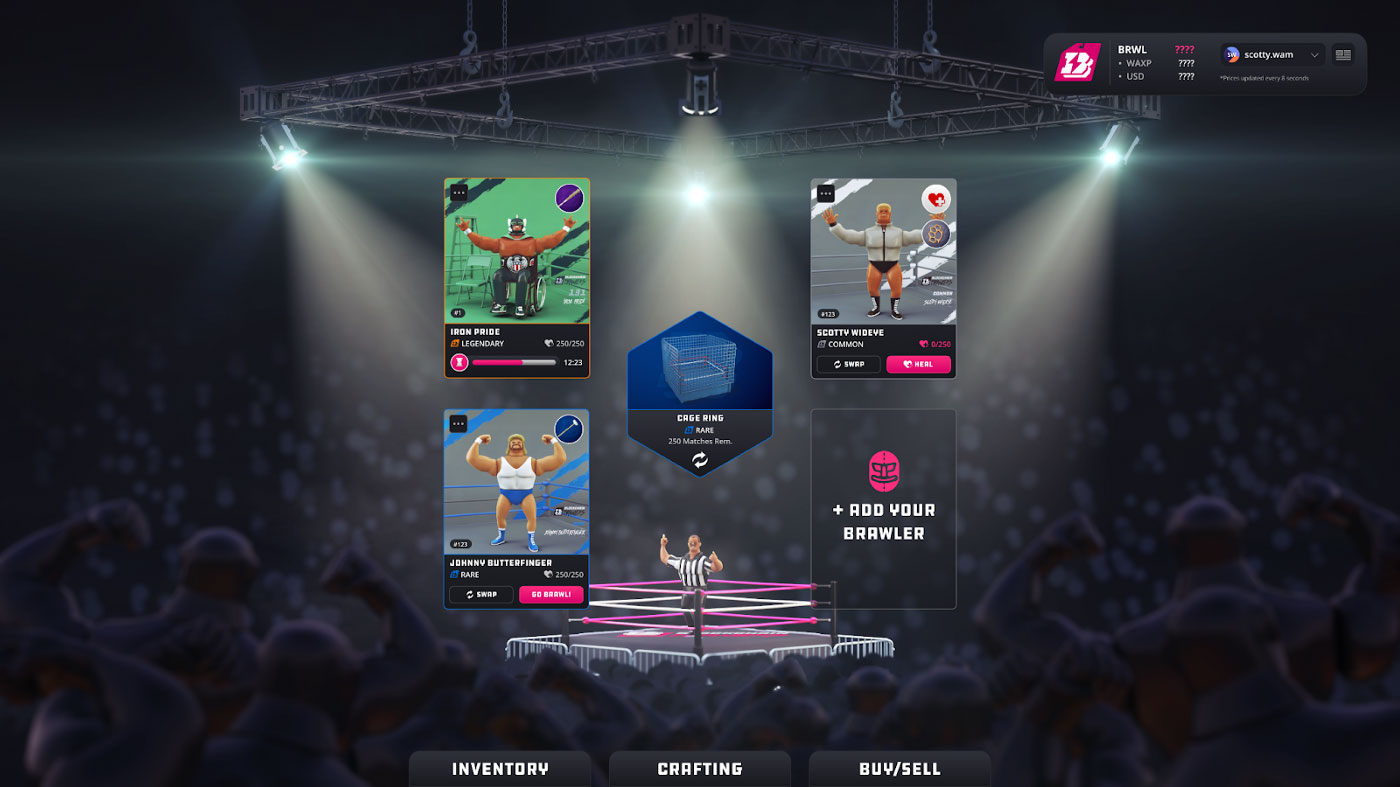 The Wax Game Studio team is hard at work developing their upcoming wrestling game, Blockchain Brawlers. They recently published some updates about the game’s economy, the user interface and some of the game mechanics. We also have more information about the upcoming Ric Flair Legendary pack sale.

Let’s not lie to ourselves, a lot of the current blockchain games are difficult to navigate, especially when you are just starting out. The Wax Game Studio team has been working hard to make sure that the user experience is as flawless as possible.

The game flow takes place in only four different screens:

New players will be welcomed by Ref Jee who will show them around in a quick tutorial to learn the basics of the game.

From the home screen you will be able to pick your ring and brawlers and go straight into a match. The other screens are always accessible via 3 persistent tabs at the bottom of the interface. On the top right corner, users have a quick access to their wallet and will be able to swap $BRAWL tokens for $WAXP without leaving the game.

The fighting screen is where you will pick your brawlers and the ring in which the match will take place. We can see that brawlers can be equipped with different items to give them extra power and skills. We can also see directly from this screen the health status and cooldown time of the Brawlers. A pretty good looking and slick interface if you ask me!

The inventory interface is where you will select the Brawler to send to the ring and where you can equip them with the different items you own. Here again, the team has put a lot of efforts in the user experience design. All the elements are clearly visible and don’t require extra steps of navigation to perform basic actions.

The crafting system looks pretty intuitive as well. You will be presented the brawlers that are ready for you to craft depending on the resources available. You will then just need to select the one you prefer and press the craft button, easy!

An Update on Blockchain Brawlers’ Economy

In a recent medium post, Mike Rubinelli, the head of the newly created Wax Game Studio, shared the team’s vision on the game’s economy and play-to-earn mechanics. Although he did not provide specific details on the earnings, he gave the community some deep insights on how his team is crafting a player driven economy.

With a limited supply of 1,050 brawlers at the beginning of the game, the team wants the players to truly own the game’s assets. They want you to brawl, earn, craft and repeat. The economy will then be in the hands of the players through the marketplace and secondary markets.

The other reason for a launch with a limited number of players is to give time to the team to study the players’ behaviours in order to make adjustments if necessary before things get out of control with a wider user-base. Quite a smart approach to make sure that they are building a sustainable economy for everyone.

Mike also discuss their plans to avoid the game to be ruled by bots. They will make sure that player’s decisions will be the key to being successful and they will bring regular gameplay updates. With these two measures alone, a repetitive piece of code should not be able to get very far in the game.

Crafting will be key to your progression in the game. Every in-game items will be craftable, except for Legendary Brawlers. Crafting items and brawlers will require $BRWL and Gold NFTs. Gold NFTs will also be tradable on the secondary market and $BRWL tokens will be available on exchanges.

The model that the team has created doesn’t have a simple recipe for success. Higher tier brawlers will earn more $BRWL whereas common brawlers will earn more Gold NFTs. As both are needed to craft, players will have to find the right balance in their strategy. The pricing of Gold NFTs will be entirely driven by supply and demand on the marketplace.

You can read more about Mike’s and the teams vision on the full medium post here.

We recently announced the upcoming Ric Flair pack sale whitelist program. Here are some additional details about the upcoming sale. Supply for this sale is limited to 90 packs of 1-of-1 legendary Ric Flair brawlers.

The sale will be opened to whitelisted users on March 3rd at 1pm ET and the window will only be open for 2 hours. After that, the sale will be open to the public. Expect these packs to sell fast! Each buyer will be limited to one pack only.

Packs will sell for the equivalent of 1500 USD in WAXP (the WAXP price will be locked in the day of the sale). You might find that expensive, but considering that legendary brawlers are currently trading at around 30,000 WAX (around $8,000 at the time of writing), this is a bargain… if you can get your hands on one.

The packs will contain one “Nature Boy” Ric Flair Legendary NFT and one free Ring NFT. The Ring NFT will come in different rarity levels: Standard, Hard Core, Cage Match or Death Match. Each buyer will also have a chance of scoring a Ric Flair NFT wearing one of the three ultra-rare belts: National Champion, Word Champion and Metaverse Champion.