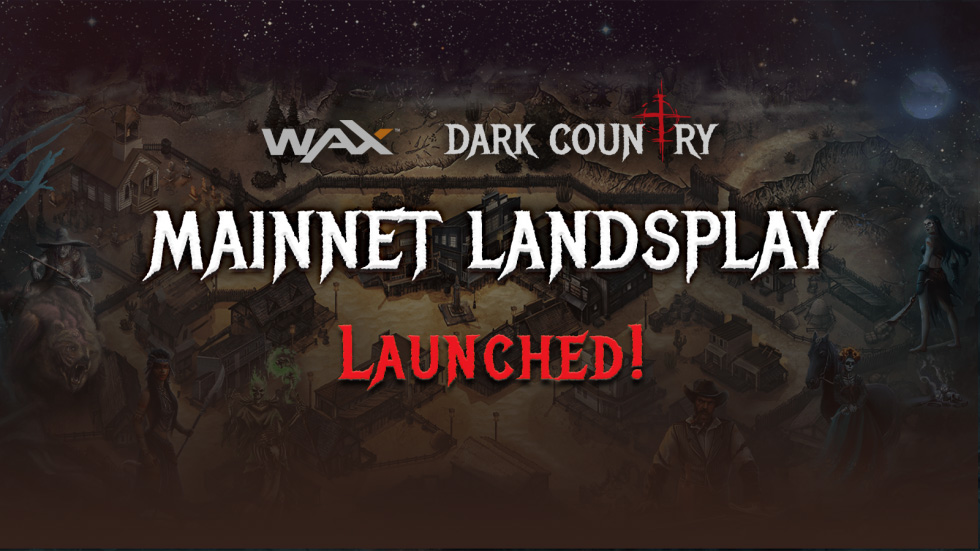 As promised in their 2022 roadmap, Dark Country opens up land gameplay on the WAX mainnet. Though the system is still in testing, and any progress made before the official launch will be wiped, Dark Country landowners now have a chance to check out the land systems and prepare themselves for the release. A release that includes mostly passive earnings for attentive landowners who take care of their lands!

No longer do landowners need to setup a WAX testnet account to try out the land gameplay. Dark Country opened up their new land map on the WAX mainnet. This is still a testing phase, so expect all progress to be reset. The game is also using a temporary token counter called TDM. Shadow Dimes won’t be distributed until after the testing phase completes. This phase is for crushing bugs, gathering metrics and feedback from the players, and giving landowners a preview of the land management and gameplay.

Ir order to access your Land and other cards, you must first ‘stake’ them into the Dark Country webpage. This doesn’t remove the cards from your wallet. You still maintain ownership. This just lets the Dark Country system know that you wish to use those cards for land gameplay.

Though the town looks complete, at the moment, only a limited number of buildings are available. These are the Saloon, which acts as a quest hub, the Guild House, for managing Guilds, the Sheriff’s Office, for creating contracts, the Bank, for staking and token transfer options, and the Town Hall where players can see the Influence leaderboard.

Influence is a key feature for landowners in Dark Country. Landowners receive daily payouts of Shadow Dimes, based on their Influence rating. Influence for each land starts at 100 and can go no lower. Each land also receives a multiplier based on rarity. From 1x for Commons, up to 10x for Mythical lands! Influence decays over time. This means that landowners need to stay active and engaged to maintain their Influence. Staking Shadow Dimes at the Bank, reduces the decay rate.

Landowners upgrade buildings on their lands at the cost of Shadow Dimes. Each building offers different bonuses for upgrades. For example, upgrading the Saloon, allows the player to host more quests.

Quests are currently the primary means of gaining Shadow Dimes and Influence. Landowners create quests by choosing a rarity level and a reward amount.

Players form parties for quests. Parties consist of 1 Hero and 40 standard cards, any rarity. The higher rarities reduce the time it takes to complete the quest. Default quest times is 24 hours. Parties can only join quests that are equal to or less than the rarity of the party’s Hero. And as you might imagine, higher rarity quests offer better rewards for everyone. Quests cannot be cancelled once they have started. Once a player takes and completes the quest, the landowner receives an Influence bonus and pays out Shadow Dimes as a reward.

The options for play to earn will expand as additional features are implemented and activated. Also, access for landowners on the Flow blockchain should open soon.

Dark Country is a collectible, trading card game built on the WAX blockchain. It brings a different theme to the world of card battling games with cowboys, guns, demons, magic, and undead minions! Dark Country plays like other TCGs you might be familiar with such as MTG, Hearthstone, and Gods Unchained. Players spend mana, play cards from their hand, and try to reduce the opponent’s health to zero.

The game is free to play and currently in an alpha phase. Though players can purchase Dark Country cards on the marketplaces, you actually don’t need any to play the game. The game comes with a starter deck for everyone to use. Players can already play to earn in Dark Country via regular tournaments, special Play the Pros events, and by staking Hero cards on the Dark Country website.

The game plans to expand considerably with the introduction of a map layer that includes land ownership, guild PvP, quests, and more!