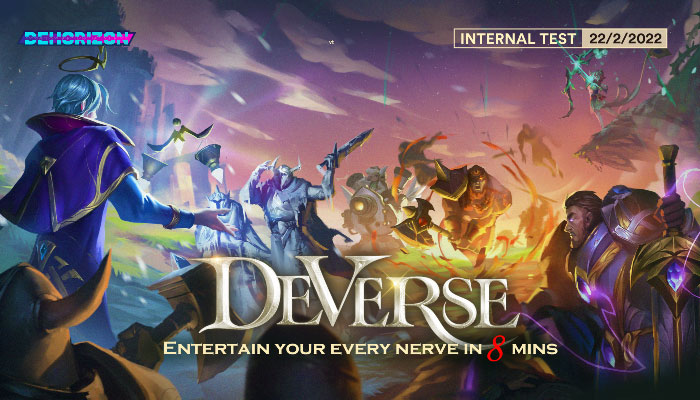 After the sellout IGO on Binance NFT Marketplace, DeHorizon is gearing up to release the internal test of its MMORPG DeVerse on the 22nd of February.  The whitelist airdrop is open now and up until February 14th, 2022.  In this article, we will dive into DeHorizon, how to join the airdrop, and what we know about the gameplay.

DeHorizon is aiming to introduce the next generation of metaverse gaming ecosystems.  The game and ecosystem seek to enable a fun experience that lets players create a second life in the fantasy metaverse.

The team behind DeHorizon is a group of gaming veterans who previously held roles at Riot, Dungeons & Dragons, and Blizzard, as well as web3 experts who have years of experience in the fintech and blockchain industries.

Players lucky enough to score a place on the whitelist will receive access to the internal test. To provide players with a Free-to-Play gaming experience, they’ll get 5000 test DVTs and 1 set of test consumables.  DVT is the in-game token in DeVerse. There are 2000 places on offer for the internal test.  Whitelist requirements:

The whitelist will include those in the top 2000 inviters.

There are some seriously awesome rewards for internal test players.  DeHorizon has set aside a prize pool of 16,535,968 $DVT.  Players will battle it out to top rankings in Biweekly Top Kills, Biweekly Top Wins, and internal testing ticket holder rankings.  Win them all and you’d take a prize pool of 944,696 $DVTs.  For more information on the prizes and rankings check out details here.

DeVerse is a fantasy team battle game with five different classes of characters, named as Numen.  Each Numen has a particular ability and role within the team.  The classes of Numen are:

Teams assemble in what is known as the “room”. After you’ve assembled the team you can head into the game. Entering a game will cost an entry fee which is paid in $DVT.

The goal of the game is to occupy the gate.  Occupying the gate will earn your team points for each second you hold it. Killing the opponent’s Numen won’t get you any points but it will help your individual ranking.

Your team will win when you either get 10,000 points in 8 minutes or if you have more points than your opposition after 8 minutes.  The winning team takes 95% of the DVT entry fees. The remaining 5% goes to the treasury, project team and is burnt.

DeHorizon seems like an exciting development in the blockchain gaming space and it’ll be interesting to see how the internal test plays out. Apart from DeVerse, they are still seriously developing battle royale DeTournament and dragon racing DeMythical.For more information visit their website or join their discord.

DeHorizon is an ambitious EVM chains-based project with its sights set on becoming a next generation metaverse game ecosystem. Beyond the general loop on gaming projects, they also focus on NFT’s interoperability, storyline of metaverse and much more to fully create an immersive metaverse.

The foundation raised USD 8.5M in October 2021 with a range of venture capital groups including Sfermion, Dragonfly Capital, and Everest Ventures Group.

DeHorizon aims to become the next generation of metaverse game ecosystems, enabling players to create, socialize, and enjoy blockchain-based games with their friends. The long-term vision of DeHorizon metaverse is to create a virtual carnival open to all metaverse inhabitants across multiple chains, fostering social environments through connected virtual experiences.