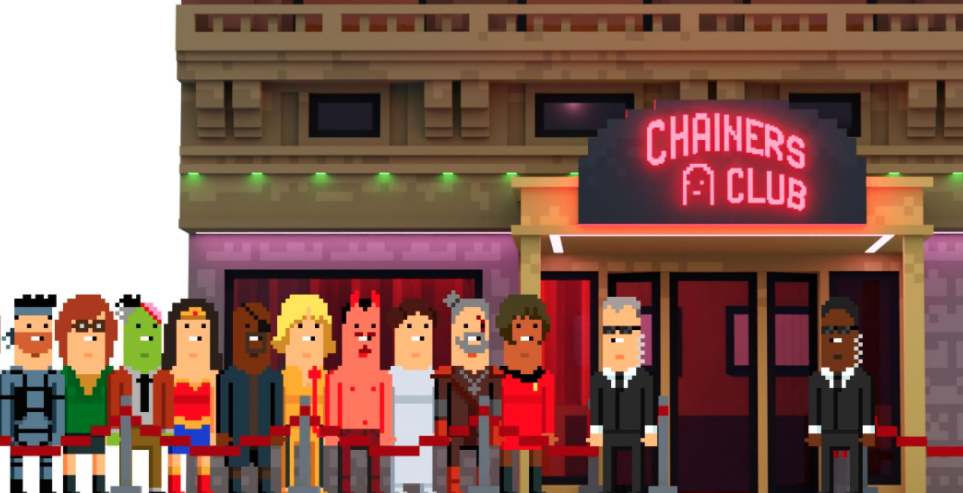 Chainers NFT, an upcoming pixellated metaverse, opened up a waitlist for its expansive project. Built on the Solana blockchain, Chainers promises a game metaverse with a community driven DAO, an NFT focus, and player created content. With unique, cutomizable avatar characters, players compete in mini-games or special events for token and NFT rewards!

The first avatar sale, expected to go live in March, features 111,111 NFT avatars. Mint prices and some other details are still in flux.

The game will be free to play. Players are not required to own an avatar. They can still play mini-games and potentially earn rewards, but the avatar perks are quite substantial. Owning an avatar opens up additional game features, provides better rewards from the mini-games and allows the buying and owning of land and properties!

Property, known as Spaces, allows for customization and semi-passive income. Space owners receive regular token payouts based on how many visitors they have. The more popular your Space, the more tokens you get. And since the tokens come from a shared pool, owners will also be competing with other owners to make their Space as enticing as possible! This provides additional incentive for Space owners to create something worthwhile rather than just sitting on empty or half-finished properties.

And then there is the governance DAO. Every owner of a Chainers NFT automatically gets a seat on the board. This DAO will discuss and vote on any changes applied to the Chainers’ smart contract. The fate and future of the game will be decided by the players’ decisions!

To get the metaverse kickstarted, the game developers plan to create five mini-games. Later features put more control in the hands of players. Including decorating and crafting, modeling game items, scripting game content, and incorporation of external NFTs!

The Chainers NFT metaverse will run with two tokens. The first, called ChainCoin ($CCC), will be the primary in-game currency. Used for transactions between players and the in-game marketplace, CCC has an unlimited supply, but also a constant demand. It is burned when crafting and travelling, and will be needed by players who wish to stake it. Players stake CCC to receive a weekly allotment of CHU tokens.

Which brings us to the second token, Chainers: Universe ($CHU). CHU functions as a governance token. Holders of CHU help make decisions about features and have some control over publishing new games. With a total max supply of 1 billion, Chainers’ plans to allot 40% of that total to the staking system. There will be no IDO for the CHU token. In addition to staking, players earn CHU for buying and holding NFTs from the public sales and as rewards from owning popular Spaces.

Also, players may earn CHU via the referral system. Every month CHU rewards are sent out to those with active referrals, adding another layer to the play to earn economy.

Sign up for their waitlist now to learn when you can first start minting. The team also welcomes your feedback and questions on their official Discord server.