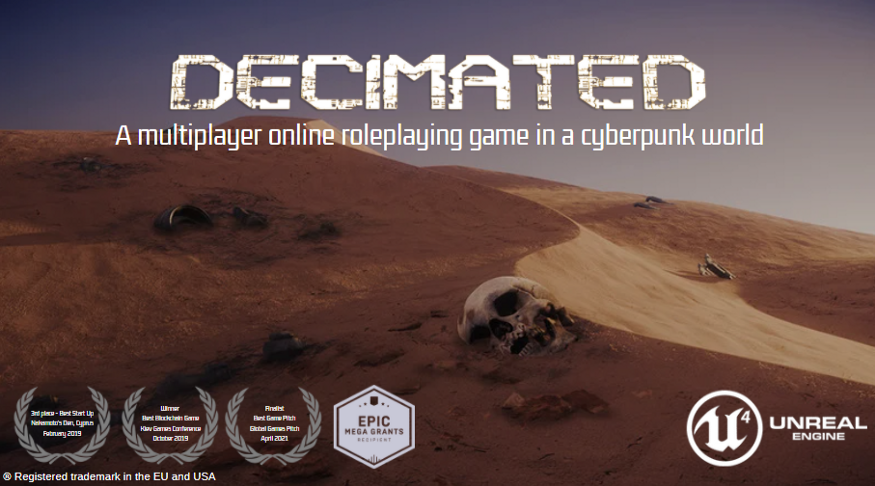 Decimated is a post apocalyptic online survival role playing game. A long time in the making and launching on steam this game sets the bar for action based blockchain games. The game is available on Steam for wishlist which will notify you straight away when the playable alpha releases in Q4 2022.

The game has been under development for almost three years, and from what I can see so far, it will be worth the wait. The project team has listened to the community and continues to work hard. They’ve just released their whitepaper update and you can now add the game on your Steam early access wishlist.

Utilizing Unreal Engine 4 the game will soon migrate to Unreal Engine 5. Decimated has a unique style defined by the obvious attention to detail that went into the artwork. The cinematic preview shows game footage of a well polished and impressive game.

Players will experience Decimated in a first person/third person view. Persistent terrain, over 64km², allows for endless exploring while searching for materials that players can harvest along their journey.

The game is set on Earth which has been devastated after hundreds of years of destructive climate change. Political and social unrest has left the old cities decimated and hostile to life. Civilization is no more. First class citizens were the only ones permitted onto the new world. You, as a player, were unworthy and left behind.

You find yourself surrounded by criminals, dissidents, and the poor — scavenge in the forgotten cities of the old world, which have become overgrown with jungle, flooded by swamps, swallowed by sand, and frozen by ice. Pollution and technical debris have polluted the environment, and survivors have taken refuge in whatever decayed structure they could find.

Players start as Human but can try out for the Cyborg Cops. You’re going to need to have a good behavior record to try out for the cops. You also need to pass a training session. The game allows cops to advance up the ranks, providing they behave. If they don’t, they might see themselves thrown out of the force!

A player’s survival is based on their ability to find food, water, and shelter in a hostile environment while also defending themselves against other players and the various mutants that inhabit the world.

You can have a look at the trailer, or head to the game’s twitch channel where the team recently played the current alpha version.

The project team has built on the Solana blockchain. The underlying token used within the game is $DIO. The token can already be traded on then centralized exchange Huobi and on Raydium. You can read more about the tokenomics on the recently updated whitepaper.

Players can trade all resources scavenged, won, or earned in the game for DIO or other resources.

Players can earn with the following activities:

In Decimated we have abandoned our planet after hundreds of years of catastrophic neglect of the environment. Political and social unrest have left the old cities decimated. Civilization has collapsed and destroyed itself, yet a cyborg police force still wields control over the wastelands. Players are either a cyborg cop or a human citizen.

Players can have all kinds of roles. Criminals, pirates, bounty hunters, drug lords, slavers, cannibals, mutated creatures, genetic experiments and malfunctioning robots all wander the wastelands. All competing for resources and territory. The cops enforce a totalitarian authority even after society is in ruin, while humans live in the wastelands.

Players can choose to play PvP or PvE. They can for example focus on collecting resources, repairing vehicles, or building bases. In addition, they could fortify shelters, collect bounties, ambush, loot or trade. Decimated is an online survival game in which players battle with and against each other for territory and resources.

Decimated is a game that sets the bar for blockchain games. The Fractured Labs team provides regular updates about their progress, so keep up to date check out their website.